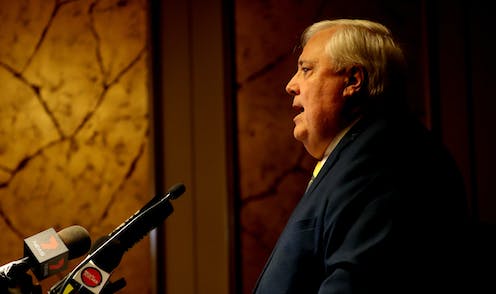 Colourful mining magnate Clive Palmer’s political ambitions appear to be in tatters. But what of his multibillion-dollar legal ambitions?

On Sunday he announced his United Australia Party will not contest Western Australia’s state election in March – a logical decision given his party attracted just 0.6% of the vote[1] in the November election in his home state of Queensland.

But he has not withdrawn his defamation case in the Federal Court of Australia against Western Australian premier Mark McGowan, over statements including comments about Palmer’s claim for up to A$30 billion in damages from the WA government over a stalled iron ore project.

The damages claim has to do with the WA government imposing conditions in 2012 on a proposal by Palmer’s company Minerology Pty Ltd to develop the Balmoral South Iron Ore mine[2] in the Pilbara. Those conditions, Palmer’s lawyers have argued, meant Minerology was unable to develop the mine, and thus suffered financial loss due to then being unable to sell the project to Chinese interests.

In arbitration proceedings Palmer’s lawyers have won several points in their bid to have these conditions declared invalid. The WA government was sufficiently worried about its exposure to hastily pass, in August 2020, unprecedented “emergency legislation[3]” to prevent Palmer pursuing damages.

Read more: The WA government legislated itself a win in its dispute with Clive Palmer — and put itself above the law[4]

Palmer has since applied to Australia’s High Court to have the WA legislation declared invalid.

But whether the High Court action goes ahead is not the bottom-line question. Even if it does hear his case, and declares the WA legislation invalid, it’s still far from certain Minerology could then go on to win damages.

The ‘first tier’ hurdle: who would buy from him

The legal precedent governing Palmer’s claim for damages are contained in a 1994 High Court decision in Sellars v Adelaide Petroleum[5]. This involved an appeal by Mark Sellars, a director of mining company Poseidon Ltd, and Poseidon itself, against a Federal Court decision that awarded damages to minerals exploration company Adelaide Petroleum due to losses suffered as a result of misleading statements by Poseidon and Sellars.

The High Court ruled against Sellars and Poseidon. The significant point in the decision was the principle the judges explained in making their ruling. A court must, with the advantage of hindsight, look at everything that took place and ask if it was more likely than not (in other words, if there was a 51% chance or more) that, even if wrongdoing occurred, it led to a lost commercial opportunity.

This is the “first tier” to be overcome to recover damages.

With the benefit of “hindsight”, any court would need to consider Palmer’s history with Chinese business partners.

One of those is his long and bitter legal feud with CITIC Pacific Mining, the powerful state-owned enterprise that operates the Sino Iron project[6], Australia’s largest magnetite iron ore mine, on Minerology-controlled tenements.

In 2014, Palmer accused CITIC of dudding him on royalty payments. CITIC, in turn, accused Palmer of siphoning off funds[7] to pay for his election campaigns. (Palmer won the Queensland seat of Fairfax at the 2013 federal election, and two UAP candidates, Glenn Lazarus and Jacqui Lambie, won Senate seats.)

China’s leading business publication, Caixin[8], quoted an unnamed CITIC executive as saying Palmer’s attempt “to swindle money from us” would “have grave consequences for foreign investors and in particular Chinese investors”.

The dispute led to several cases in WA’s Supreme Court. A 2017 ruling awarded Minerology A$200 million in back payments, as well as ongoing royalties then worth about A$400 million a year. (CITIC’s appeal was rejected in 2019[9]). But in 2020 the court threw out Minerology’s case for about A$300 million more from CITIC as an “abuse of process[10]”.

But just as damaging to Palmer’s dealings with the Chinese were his statements on national television in August 2014, in which he said the Chinese government wanted to “take over our ports and get our resources for free”, and called Chinese officials[11] “bastards” and “mongrels”.

So even if the High Court clears the way for Minerology to pursue its damages claim against the Western Australian government, there’s an argument to be made that Chinese interests would have been more likely than not to decline to do business with Palmer.

If so, Palmer would recover no damages.

There is also a second-tier hurdle to overcome if a court decides, for all the bad blood, that Chinese interests would have let bygones be bygones and be prepared to deal with Palmer.

In assessing the plaintiff’s actual loss, the court will need to consider every contingency that might affect that loss. It was held in Sellars v Adelaide Petroleum that to calculate the actual damage, what is called the “degree of possibilities” approach must be applied.

Read more: How Clive Palmer could challenge the act designed to stop him getting $30 billion[12]

This approach means the court must look at the price of iron ore at the time the mine would have been ready for sale, what a potential buyer would be prepared to pay for the mine, and thus what loss has been incurred. This cannot be a precise exercise; the court just does its best.

But it’s the first hurdle that Palmer needs to get over first.

So even if he chances his arm in the High Court, and wins, he and his lawyers still have a legal mountain to climb. Establishing his actual entitlement to damages is likely to prove troublesome.