For many of us, one of the upsides of 2020 was being freed from the grind of the daily commute.

For the 40% of the workforce able to “telecommute[1]”, COVID-19 social distancing measures saved us an average of about an hour a day[2] – and much more for those of us living in the outer suburbs of cities.

Congestion, crowding and unpredictability increase stress and dissatisfaction. The longer it takes, and the more we have to do in the company of others, the more we dislike it[4].

But it’s also possible to miss aspects of that enforced time between work and home. For all its downsides, the daily commute does have some positives, acting as both a starter button and circuit breaker to differentiate work from home life.

As life returns to “normal” and employers ask us to return to the workplace, thinking consciously about those benefits can help make the most of your commute. 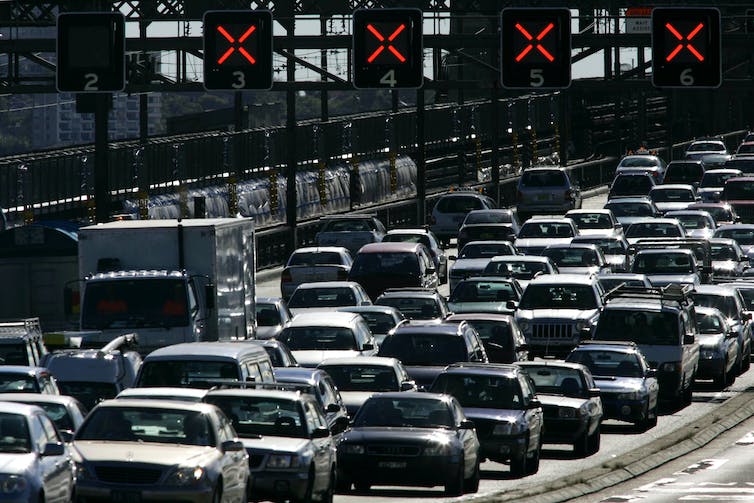 Though we think of commuting as a modern phenomenon, spending time getting to and from work is as old as humanity. Hunting and gathering (going back 200,000 years), farming (about 10,000 years), and living in cities (about 5,000 years) all involved leaving and returning home. These routines seem to have ingrained in us an idea of acceptable travel times.

In 1994 an Italian physicist, Cesare Marchetti, wrote a paper, Anthropological Invariants in Travel Behaviour[5], on the “quintessential unity of travelling instincts around the world, above culture, race and religion”.

Drawing on the work of Israeli transport analyst Yacov Zahavi, Marchetti proposed humans had always been willing to spend about an hour a day travelling from and to home. 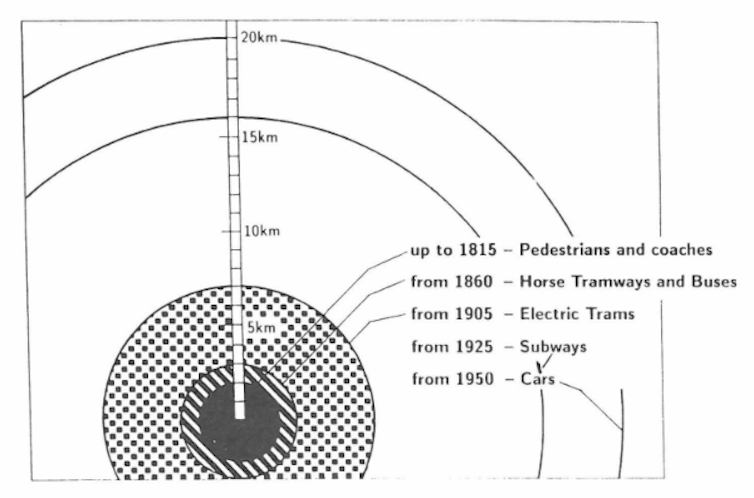 This idea of commuting time being 30 minutes each way has become known as Marchetti’s Constant. In a 2001 paper[8], travel researchers Lothlorien Redmond and Patricia Mokhtarian found most people’s ideal commute time was, in fact, less – an average of 16 minutes – but their results also confirmed the dislike of any commute longer than 35 minutes. 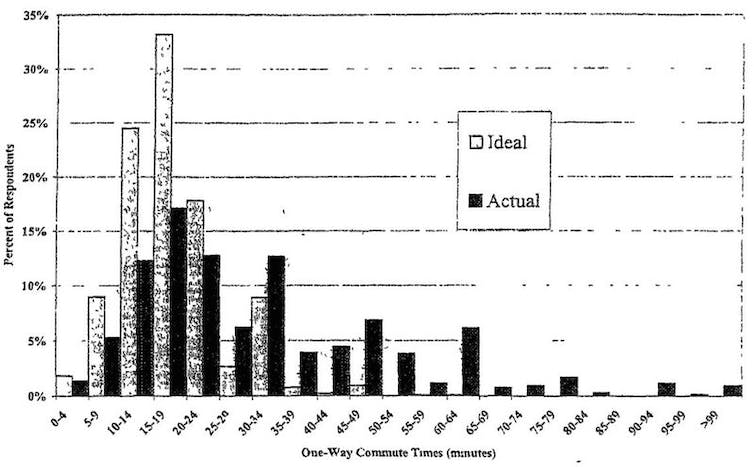 The longer the commute times, the more stressed and dissatisfied[11] we feel.

Yet without time between home and work, there’s also a downside. As Marchetti wrote: “Even people in prison for a life sentence, having nothing to do and nowhere to go, walk around for one hour a day, in the open.”

Commuting can be a ritual that helps us psychologically separate home life and work – switching off from personal concerns in the morning, and then detaching from work worries in the evening. A huge body of research over the past four decades show this “psychological distance[12]” is crucial to well-being.

Research also shows that switching from our home to work “identities”[14] carries cognitive demands. A buffer between the two can help make this transition.

It is possible to achieve this psychological distancing without a commute, of course – by going for a morning walk and changing into work clothes – but the demands of both family and work responsibilities often mean we don’t make that time.

Making the most of your commute

So we shouldn’t necessarily spurn the return to the daily commute. Yes, there are downsides, but being conscious of the psychological benefits enables you to maximise its benefits.

Rather than thinking of it as dead time, think of it as “me” time.

In the morning, use your commute to plan your day. Research has found this increases satisfaction at work[15] and makes longer commutes more palatable. Maintaining small routines[16] on the way has also been found to help.

In the evening, use the time to unwind with pleasurable activities such as reading, playing mobile games, calling a friend or family member, listening to music or a podcast. These are activities you won’t necessarily have time for once you get home.

Read more: COVID has proved working from home is the best policy to beat congestion[17]

Doing nothing is good too. Many of us have little time for idle thoughts. Here’s a chance to let your mind wander. Free thought time[18] helps to solve problems and inspire creativity.

And, of course, switch to walking or cycling if you can. Along with the “alone” time it gives you, physical activity is strongly associated with higher overall happiness[19].

You can’t necessarily control the amount of time you spend commuting, but you can control what you get out of it.