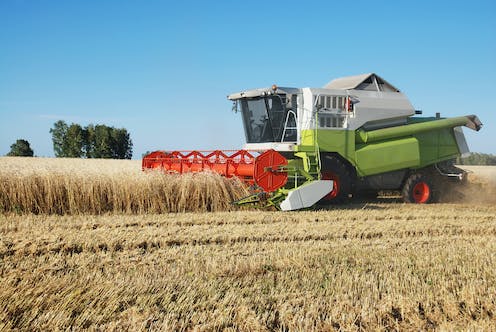 Prioritising exports by small and medium businesses would boost wages, according to our work for an ongoing parliamentary inquiry[1].

Smaller Australian businesses have disproportionately low levels of exports[2]. This is despite being more profitable[3] and productive[4] than larger enterprises in most of the sectors we analysed.

Smaller Australian businesses also pay lower-than-average wages[5]. As wages are linked to the price and sales of goods and services[6], increasing exports should boost the pay packets for those employed by small businesses.

In fact, it is well established[7] that export-oriented industries pay higher average wages.

This chart shows that in all sectors the average wage of workers in small businesses is below that of the sector averages. Average wages in medium business were closer to the sector average, with a notable differential appearing in retail and agriculture.

The agricultural sector is an egregious example, where if you work for a small business you are likely to earn less than one-third of what you would for a large firm – A$10,000 as opposed to over A$36,000 a year on average.

In our analysis we looked at Australia’s bilateral free trade agreements with major trade partners in the Asia-Pacific region (the USA, China, Japan, South Korea, Singapore and New Zealand) across key economic sectors (agriculture, manufacturing, mining, retail trade and transportation) in the past decade.

The data show small businesses largely under-utilise free trade agreements. Large enterprises are responsible for 100% of mining exports, 93% in manufacturing, 88% in agriculture, 81% in transportation and 72% in retail.

However, we found no evidence to support the Productivity Commission’s proposition[9] that to succeed internationally an enterprise must be of a certain scale and scope.

The intuitive explanation for low exports by small and medium businesses is that they aren’t as productive as larger firms. Among other things, smaller businesses are more labour-intensive[10].

But this explanation does not gel with how strongly entrenched[11] smaller firms are in the Australian economy.

Between 2012 and 2016 most small enterprises (and several medium-sized enterprises) had greater operating profit margins[12] than their larger competitors in the sectors we assessed.

By looking at the contribution businesses make in their industry, known as “industry value added”, we can also see that small and medium businesses are the lifeblood of certain sectors, particularly agriculture and retail.

A comparison of the value added by small businesses in these sectors with their exports shows that the exports of small Australian businesses are disproportionately small.

For instance, there were A$50 billion of agricultural exports[13] in the last financial year. Large enterprises captured 88% of this export market despite adding only 4% to the overall industry value.

If smaller Australian agricultural companies could just double their export share this would increase productivity, employment and wages. This would benefit struggling rural communities in particular.

As we have shown, smaller Australian businesses are more productive than large firms. But they maintain disproportionately low levels of exports and wages. We found that under-utilisation of free trade agreements, rather than lack of access to them, is the fundamental cause of the lower exports.

This suggests that Australia’s trade policies should prioritise international trade and foreign investment instruments for small businesses to stimulate domestic wages[15] and fairly distribute the gains of global value chains[16].

Public policies should analyse free trade agreements in terms of their contribution to the actual productivity of enterprises by sector, rather than the potential to expand the total market value of exports.

In other words, the best use of international trade is not touting banalities like “this free trade agreement is worth such and such”. Rather, it is by calculating in what sectors, and in what markets, Australian enterprises actually gain or lose from international trade.

With transparent information, based on substantial economic evidence, governments could at last find political legitimacy to implement systemic trade adjustment[18] measures. This would reallocate resources within and between sectors, from large to small and medium export-oriented businesses.