What used to be known as a requirement to lend responsibly is now regarded as red tape.

The National Consumer Credit Protection Act introduced by the Rudd government after the global financial crisis introduced responsible lending obligations that required lenders to ensure the loans they were offering were “not unsuitable[1]” for borrowers.

No longer. If passed into law, changes announced by treasurer Josh Frydenberg last week in the leadup to the budget will remove the obligation for most lenders, allowing them to rely instead on the information presented to them by borrowers[2].

In the treasurer’s words, it will replace the current principle of “lender beware” with “borrower responsibility[3]”.

He says it will make it easier for consumers to borrow, which would have been a disquieting prospect during the borrowing and house price boom that peaked three years ago under the old rules[4] and was only slowed by intervention from the Australian Prudential Regulation Authority[5] (APRA).

Frydenberg says there will be safeguards. Lenders will have to comply with APRA lending standards. The special restrictions on “small amount credit contracts” (a discrete category that covers payday loans) will remain in place. Debt management firms will be required to hold licences.

But the provisions will not require lenders to assess the crucial question of whether a particular product is suitable for an individual borrower.

For the first time in a decade, that will be up to the borrower.

Lenders might decide to do that, but they won’t have to. What the treasurer calls “borrower responsibility” will become “buyer beware”.

Lenders will be obliged to be members of the Australian Financial Complaints Authority and have to act efficiently, honestly and fairly.

And members of the Banking Association will be subject to a code of practice[7] that requires them to exercise the care and skill of a diligent and prudent banker.

But the duty of a banker is to the bank. That means a banker’s job is to ensure that a loan can be recovered, perhaps by selling property, rather than that the borrower can afford to make the payments.

…but bankers work for banks

When the financial crisis struck, equity was stripped[8] from family homes by lenders looking after themselves. The new proposed changes would allow it to happen again.

The government says lenders have had to devote substantial resources to checking incorrect and misleading information provided by borrowers.

But much of it would have come from mortgage brokers[9] acting on behalf of borrowers but being paid as if they were lenders, receiving a commission related to the size of the loan.

And brokers work for banks 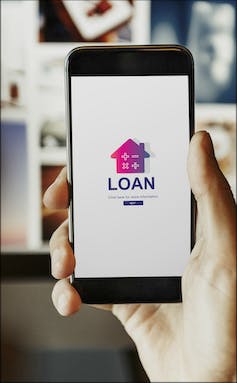 Mortgage brokers till get paid by banks, despite a recommendation of the royal commission.

The Royal Commission recommended that brokers be subject to a new “best interest” requirement, which is due to come in in January[10], untested, just before the responsible lending requirement is withdrawn in April.

Commissioner Kenneth Hayne also recommended banning brokers’ commissions[11] and having them accept payment instead in the form of an upfront fee paid by the borrower not the lender. The government at first accepted and then rejected[12] the recommendation.

Even where they are not encouraged to over-borrow, consumers are often making decisions under stress or blinded by optimism bias[13].

Even where entirely honest they can be unable to make reliable predictions about the level of credit they can bear.

If the responsible lending rules we have are considered too prescriptive, complex and onerous[14] as the treasurer says, a reasonable approach would be to make them simpler and principles-based rather than prescriptive as recommended by Commissioner Hayne[15].

Read more: Vital signs. It's one thing to back down on Hayne's recommendation about mortgage brokers, it's another to offer nothing in its place[16]

The Australian Law Reform Commission has just commenced an inquiry into how to simplify Australia’s complex financial services regime[17].

The government might have asked it for a heads up or kept the responsible lending obligations in place until it saw what it had to say.