In light of Victoria’s COVID-19 resurgence, and with school holidays imminent, it might seem likely premier Daniel Andrews would tighten social mobility restrictions and his New South Wales counterpart, Gladys Berejiklian, would close the border with Victoria.

Read more: Victoria's coronavirus hotspots: not quite a second wave, but still cause for concern[1]

But it’s unlikely either will. Here’s why.

Politicians have varying degrees of competence. We voters only learn about that over time, based on their track record. We draw inferences about their competence from their actions. Because of that, politicians are reticent to ever admit they were wrong.

Imagine, for simplicity, there are just two types of politician: competent and incompetent. The reality is more complicated, of course, but all useful models simplify reality. To paraphrase the celebrated British economist Joan Robinson[2], a map on a scale of 1:1 is no use at all.

Let’s assume both types have a chance of knowing the best policy course, though competent types are more likely to get it right.

All else being equal – factoring out policy positions, for example – voters would like to elect competent politicians.

In lieu of better information (or even with it), they draw inferences about competency from politicians’ public actions.

Consider a politician who is competent. Faced with a degree of uncertainty about the right course, they take a specific policy stance. Think of Andrews going for a harder lockdown in Victoria than other Australian states. Or Berejiklian insisting Queensland closing its border with New South Wales was a bad idea[3].

Or think of a stark example of incompetence, such as US president George W. Bush’s 2003 decision to invade Iraq and topple Saddam Hussein. Whatever one thinks of the decision – I consider it the then most significant US foreign policy mistake since Vietnam – the Bush administration believed it would bring democracy to the Middle East. 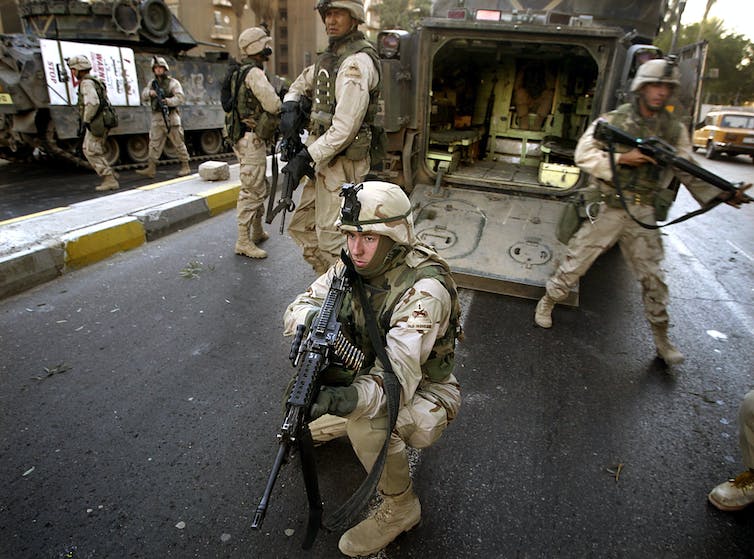 US soldiers in central Baghdad in November 21, 2003. Damir Sagolj/Reuters

As Bush’s vice-president Dick Cheney said in the days just before[5] the US invasion began:

My belief is we will, in fact, be greeted as liberators.

Then, as is wont to happen, new information arrives that casts doubt on the original decision. In the case of Iraq, it turned out Americans weren’t greeted as liberators, and toppling Saddam sparked a vicious and protracted civil war.

But did Bush reverse course?

He did not. A big part of the reason (along with neoconservative advisers like Cheney and Paul Wolfowitz being in his ear) was that to do so would be admitting he got it wrong.

In the language of economics, this would have led voters to update their beliefs about the probability of Bush being competent.

This might sound blindingly obvious. But it is also a subtle point. Why wouldn’t voters, we might ask, reward a politician who says: “I messed up. I made the best decision with the information I had at the time. Now I have new information, and when I get new information I change my mind.”

Even when faced with new information, politicians thus have an incentive to “gamble” on the risky choice that vindicates their initial stance. By not changing course, they preserve their reputation with many voters as likely competent. In fact, “sticking to their guns” might even boost their appeal.

So it is that competent politicians may fail to admit their mistakes, even when they know they’ve messed up.

Back to the spike in COVID-19 infections in Victoria.

If Andrews reverses course and tightens social-distancing provisions, he will be implicitly admitting his government relaxed them too soon.

Similarly, if Berejiklian now says closing the border with Victoria is a good idea, voters will question her past stance on borders.

In both cases, the premiers may wish to gamble (to a degree) by doubling down on their positions.

Read more: Vital Signs: rules are also signals, which is why easing social distancing is such a problem[6]

The perverse but logically inescapable possibility is this. Andrews and Berejiklian might well have been right all along. It might now make sense for them to change course. But doing so could damage their re-election prospects.

Maybe politicians have an even tougher job than we give them credit for.