Working from home during COVID-19 appeared to cost us little.

Yet employers effectively requisitioned part of those homes.

While necessary, it was far from costless to us, and our generosity shouldn’t be taken for granted.

Bureau of Statistics figures show that during April and May about half[1] the workforce worked from home.

Working at home has been far from costless

Preliminary results from a survey of more than 2,000 households[2] suggest paid workers put in about as many paid hours per day as before (half to one hour less) but that unpaid work skyrocketed, by an extra five hours[3] per day for women, and an extra two and a half hours for men.

Much of the increase was in childcare. Three in four[4] Australians who live with children kept them home.

Some of it was in extra cleaning and washing, costs that for the moment (along with, for some workplaces, rent) many employers no longer needed to bear.

Few of us working from home will bother to bill our employers for the extra heating, office furniture, office consumables, home phone and internet use, toilet paper and coffee we’ve had to fork out for.

The Tax Office has indicated it will disallow[6] deductions for tea, coffee and toilet paper saying, “just because you have to provide those things for yourself doesn’t make them deductible”.

Akin to the requisitioning of assets permitted by the state in emergencies, employers have in effect requisitioned parts of our homes – rent free and without paying utility costs.

Read more: Forget work-life balance – it's all about integration in the age of COVID-19[7]

With more people using each home, and more meals cooked and eaten at home, time in the kitchen has soared. As supermarket shopping has become less appealing, consumer durables such as bread-makers[8] and freezers have been brought in. Backyard vegetable gardens and chicken runs[9] have popped up.

Most of the extra work has fallen to women. Surveys often understate it by asking only about the “primary[10]” activity in each quarter hour block rather than secondary activities (which often include childcare) undertaken at the same time. Multitasking intensifies work.

How do we make it count? 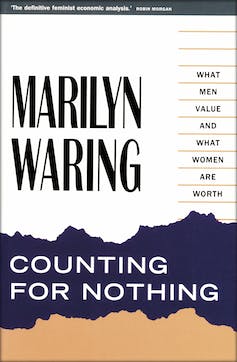 Counting for Nothing, released in 1988[11] In an explosive book released more than 30 years ago entitled Counting for Nothing[12], New Zealand politician and economist Marilyn Waring described the dominant method of accounting for work as “applied patriarchy[13]”. The tool is gross domestic product (GDP), a measure that mostly only takes account of work that is paid. The point was that unpaid household work and care counted for nothing. Since then, time use surveys have found that non-market household production is very large – in Australia, equivalent to an extra half[14] of GDP. This matters, because its exclusion allows GDP to give us a distorted idea of progress. In each normal year the Organisation for Economic Co-operation and Development forecasts growth in developed nations of between 2% and 4%. That’s growth in gross domestic product. OECD calculations released in 2018 suggest that as much as a third[15] of that growth – 0.84 to 1.79 percentage points – is an artefact, created by the shift from what had been unpaid household work and childcare[16] into to paid household work and childcare. That is, the official figures have presented a mirage. Parents have replaced unpaid childcare – which is not counted in GDP – with paid childcare, which is counted. Read more: The National Breastfeeding Strategy is a start, but if we really valued breast milk we'd put it in the GDP[17] The switch has been recorded as “growth”, but it hasn’t been growth in work done or services provided. It is better described as accounting rather than economic growth. If the accounting was done properly – if countries such Australia properly counted the value of unpaid household and services – it would show much lower growth and more frequent recessions. And if our environment and resources (another omission except when they are exploited) had been properly accounted for, GDP growth would be lower again. The household services artefact has been reversed during the COVID-19 lockdown. Many of us have been doing as much or more than we did, but less of it has been counted. As it happens, the value of services provided by the home itself are included in GDP, through rent for renters and “imputed rent” for home owners. Home-grown produce is included as well, but unpaid human-provided services are not. It’s as if it didn’t happen The weak March quarter GDP result[18] strengthened calls for extra spending on infrastructure – things such as mines[19], pipelines[20] and fast trains to airports[21]. Days later the prime minister announced that childcare would no longer be free and JobKeeper for childcare workers would be replaced by a less generous subsidy[22]. It’s not what might have been expected after a historic opportunity to rethink productivity and wellbeing. Putting money into the care sector creates twice as many jobs per dollar[23] as putting it into construction. A higher proportion of investment in the care sector also flows to women, whose paid work has been disproportionately hit by the shutdown[24]. Read more: She won't be right, mate: how the government shaped a blokey lockdown followed by a blokey recovery[25] Things that would help include increased worker protection against white collar sweatshops[26]), expanded and reconfigured tax deductions for working from home, a paid allowance for home schooling costs[27] during the shutdown and a shorter working week[28] to rebalance roles at home. Behind everything should lie proper accounting for care work. Without it we are likely to continue to rely on the generosity of unpaid working women, acting as if it is free.