Later today we’ll know what the bushfires and the coronavirus did to the economy in the three months to March: whether gross domestic product[1] grew (as is usual) or whether it shrank (as is rare, and heralds a recession).

Imperfect or not, it is measured the same way every time, which is why changes in it give us a good idea of changes in what we produce and earn.

Most likely it will tell us that what we produced and earned shrank.

Read more: Australia's first service sector recession will be unlike those that have gone before it[3]

There is a minority view, held by five[4] of 25 economists surveyed by Bloomberg, that it could tell us the economy grew, perhaps because of panic buying of toilet paper and the like in March, although much of the demand will have been satisfied by running down inventories in March rather than producing more.

This has led to headlines[5] saying Australia might avoid a recession.

It would come as a surprise to those who have lost their jobs, had no work or closed their businesses. It reflects the media’s common, but flawed, definition of a recession as two consecutive quarterly falls in real GDP[6].

The ‘technical’ definition is wrong

This is sometimes referred to this as a “technical” recession, which is an odd distinction given that no-one refers to a “generic”, an “artistic” or a “lay” recession.

The inadequacy of the definition is illustrated by looking at the Australian economy’s response to the 1973 oil shock and subsequent global economic slowdown.

ABS 5206.0[7] Real GDP contracted in only one quarter[8] of 1974, but by a massive 2%, the biggest plunge on record, and enough to mean that less was produced in the last quarter of 1974 than in the last quarter of 1973. The unemployment rate more than doubled[9] in the space of year. Consumer confidence plummeted[10]. Any reasonable person would have concluded that during 1974 the Australian economy was deep in recession. So what is a recession? Probably the most reputable source is the US National Bureau of Economic Research[11] which has been studying business cycles for a century, and in the United States is regarded the arbiter of when recessions begin and end. It defines a recession[12] as a significant decline in economic activity spread across the economy, lasting more than a few months, normally visible in real GDP, real income, employment, industrial production and wholesale-retail sales Note that there is nothing in this definition that limits a recession to (or requires) two quarters of sliding GDP in a row. A “depression” is a very severe recession. 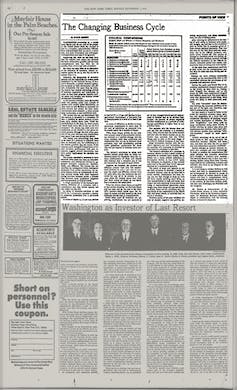 The newspaper article that sparked talk of ‘technical’ recessions. New York Times[13] An elephant would still be an elephant if it didn’t have a trunk. As with a recession, there are many ways of defining an elephant, but we know what one is when we see one. The narrower two-quarters-in-a-row definition was introduced in a 1974 newspaper article by Julius Shiskin[14], an economist then serving as the US Commissioner of Labor Statistics. He set out some “useful guidelines” that could be used to guess at whether something was a recession while waiting for the formal declaration from the National Bureau of Economic Research. One was “declines in real GNP for two consecutive quarters”. It’s a rule of thumb… The simplicity of the suggestion struck a chord, and it was widely adopted. Australia has no institution comparable to the National Bureau of Economic Research to date recessions, but there is broad consensus we have had six[15]: the prolonged depression in the 1890s when the Federation drought coincided with the collapse of a speculative boom in Melbourne and weak global demand the global great depression of the 1930s which followed the Wall Street crash and was exacerbated by tariff wars the milder recession that followed a credit squeeze[16] in the early 1960s the mid-1970s recession also caused by a tightening of access to credit in the face of inflation and a sudden jump in oil prices the early 1980s brought on a US recession and exacerbated by drought the early 1990s “recession we had to have[17]”, brought on by extremely high interest rates that caused the collapse of several Victorian financial institutions During the 2008 global financial crisis, Australia’s economy performed better than almost all its peers, with no annual fall in GDP and a relatively small increase in unemployment. When, after having fallen in the December quarter of 2008, real GDP climbed rather than fell again in the following quarter, Prime Minister Rudd said he had never been as elated[18]. It allowed him to claim he had avoided a “technical” recession. …with real-world consequences It is widely agreed that GDP will have fallen in the June quarter of 2020, the one following the March quarter. So long as lockdowns do not need to be reimposed, the economy is likely to recover a bit in the September quarter, meaning that, unless GDP fell in the March quarter, Australia might be able to boast it has “technically” avoided a recession. It would happen in the midst of what the Reserve Bank governor described this week as the biggest economic contraction since the 1930s[19]. It’ll turn on whether today’s figures show show a small rise (maybe 0.1%) or a small fall (maybe 0.1%) in March quarter GDP. In other words, it’ll depend on nothing much. Read more: The Reserve Bank thinks the recovery will look V-shaped. There are reasons to doubt it[20] But the media definition of “technical” recession might be influencing policy design. When the government was concerned that the bushfires would lead to GDP contracting in the March quarter, its focus seemed to be on avoiding a second fall in the June quarter. Its A$750 payments to income support recipients were rolled out only after March 31[21]. Its increase in the instant asset write-off and cash flow assistance to small businesses were to end on June 30[22]. Once it became clear that GDP would fall in the June quarter, it appeared to shift its focus to avoiding a further fall in the September quarter, announcing JobKeeper and JobSeeker programmes that would run to the end of September[23]. It’s not the same as providing help when needed. It might be a consequence of our needlessly-precise definition of a recession.