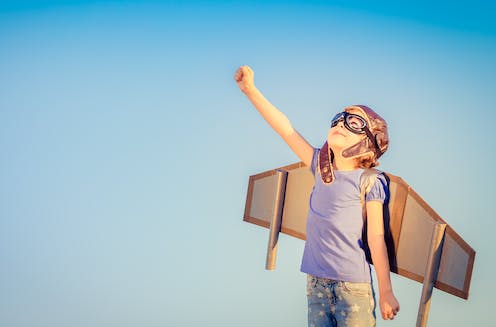 In Oceans 8[1], when Debbie Ocean is asked why she felt the need to organise a multi-million-dollar jewellery heist, she replies: “Because it’s what I’m good at.”

Within the workplace, deriving genuine enjoyment from being skilled at something, and using those skills and abilities to succeed, is a very rewarding experience. This feeling, along with the jewels, is what Debbie was after.

On the other hand, risking failure with unfamiliar tasks, or when taking on new and difficult assignments, can be a terrifying experience, even though ultimately rewarding if we succeed.

Both experiences relate to “self-efficacy beliefs” – workers’ perceptions about their competence or ability[2]. Our research[3] shows interesting gender differences in whether people prefer feeling either truly capable or else challenged to stretch their abilities.

Read more: Happiness at work doesn't just depend on your employer[4]

The imposter phenomenon is characterised by feelings of inadequacy or being a fake. It implies self-doubt and is usually associated with a level of anxiety. The phrase was coined by the feminist psychotherapist Dr Pauline Clance[6], who described it as an “internal experience of intellectual phoniness” and “feeling like a fraud[7]”.

Not only is this very unpleasant, it is also extraordinarily common, both anecdotally and in research findings[8]. High-achieving women[9] (but far fewer men) often retrospectively report feeling anxious and expecting people to notice they had been hired “by accident” into senior roles.

Even Facebook COO Sheryl Sandberg[10], in her 2013 book Lean In[11], admits to feeling like an imposter as a young woman. She states:

I was sure that I was about to embarrass myself … And, every time I didn’t embarrass myself – or even excelled – I believed that I had fooled everyone yet again and that one day the jig would be up.

Relating to both of these constructs – the high self-efficacy driving Debbie Ocean and the imposter phenomenon experienced by the young Sheryl Sandberg – our recent research[12] on a particular subset of workers who report “loving” their jobs, has revealed an intriguing gender difference in how employees describe these loved jobs. Those who reported loving jobs that gave them a feeling of competence were almost all women. Those reporting gaining enjoyment from work that challenged and stretched them were mainly men.

It is important to note here that the women in the study were not describing “easy” work, nor did they have stress-free roles. They included international aid workers, lawyers, doctors, academics and senior administrators. It was not that they weren’t challenged in their jobs, but it was not the challenge, specifically, that they enjoyed.

Instead there was a sense of intrinsic satisfaction and enjoyment from a hard job done well. In other words, they loved their work and gained enjoyment because they had the skill, capacity and ability to do their jobs – and were using these to the fullest.

Many of the women wrote about the sense of satisfaction that came from knowing their skills were a good fit for the role and helped them to make a meaningful contribution. They said things like:

[This job demonstrates my] … ability to argue and use my legal knowledge and research skills.

A patient came in with an injury that was misdiagnosed. After assessing the patient I referred them on for specialist care and further X-rays – correct diagnosis was then established which led to a much better functional outcome for the patient.

Commercial invoices and proforma invoices must match letters of credits exactly. I never had an invoice returned by the bank because it did not match the requisitions. This proved to me that I knew my job very well.

Biting off more than you can chew

Male respondents, on the other hand, when describing their “most loved job” tended to talk about deriving pleasure from being stretched or tested in some way, and of overcoming seemingly insurmountable challenges. Stating for example:

As [a small New Zealand business], working with the team to win a large contract with one of the world’s biggest companies, headquartered in the USA. Up against large and sophisticated competition, but winning the work – David and Goliath stuff!

Preparing an athlete to compete for a game they did not think they would be able to compete in due to an injury; satisfaction with beating the odds and being behind the scenes in important sport history.

Organisations are often very ready to praise the adventurous risk-takers and go-getters who are willing to push themselves[13] and their team to (and perhaps beyond) the limits of their ability. Advice such as “bite off more than you can chew, and then chew like crazy” exists throughout practitioner literature and the internet.

While there is little doubt these over-confident workers can be beneficial to organisations, especially small and entrepreneurial ones so common in Australasia, perhaps more attention and appreciation should be awarded to those who do excellent work within their capabilities.

We should be just as quick to recognise that a skilled worker who is keenly aware of her abilities and competence, and who takes on tasks they know they can excel in, is as, or more, valuable than someone who opens themselves to ruin by being willing to “give it a go”, perhaps refusing to admit to being out of their depth.

It is those adventurous, but potentially reckless, daredevils who may risk not only their own career, but potentially the safely and well-being of their team, or the organisation they work for, in the quest for opportunities to stretch themselves.