Ardern was not, as some critics seemed to assume, just flying a kite. She was responding to various ideas about how to boost domestic tourism. Like the hospitality industry, tourism has been economically ravaged by the COVID-19 lockdown, so her remarks received a lot of coverage.

But Ardern added a caveat that received rather less attention: “Ultimately, that really sits between employers and employees.”

This suggests it is unlikely to become official government policy, but rather something businesses might choose to adopt if it made sense.

The idea has already gained traction in Australia[2] and America[3], highlighting a widespread interest in new ways of organising work. Ultimately, Ardern was suggesting the end of lockdown might present organisations with a chance to do things differently.

But could it work? How would organisations do it? And what would be the benefits?

One company has shown the way already

In New Zealand, the four-day week was pioneered in 2018 by Andrew Barnes, now a champion of the concept after trialling and then adopting it for his finance company, Perpetual Guardian. Employees now work a four-day week on their previous five-day salary. They work normal eight-hour days, not simply longer hours to make up a normal 40-hour week.

Research showed employees reported significantly better well-being than before the trial, including a better work-life balance and lower job stress. They were more engaged and reported higher job satisfaction.

Overall it was a win for employees and their employer.

From my own research[5] I’ve identified a few key factors that determine success. Firstly, it needs leadership support. Having a leader who can champion the adoption of a four-day trial is vital.

Barnes recommends a trial as the first step to discovering whether it is an option for your organisation or not. As evidence of the benefits builds (for example, Microsoft[6] in Japan reported a 40% increase in productivity), employees might want to lobby their managers to give it a go.

My research also showed employees are central to making a four-day week work. Ultimately they have to create better ways to work – for example, collectively identifying what was previously wasted time and seeking solutions. In one case, a team told me they reduced a two-hour weekly meeting to 30 minutes a fortnight.

How to reschedule the week is another factor: organisations might adopt a fixed day off – such as Melbourne firm Versa, which chose Wednesday[8]. Or they might rotate the day off among team members.

The latter approach requires a strong creative focus on maintaining team productivity. But there is no one way to make it work. While Perpetual Guardian operates 32-hour weeks, Versa works a 37.5-hour week in four days.

What is most important is that workers are empowered to think about productivity and wastage and to make their work more efficient and effective. Even if an organisation trials the four-day week but chooses not to adopt it, it will still gain useful insights into working methods and productivity.

Beyond the benefits to employers (more focused and attentive staff, better customer relations) and employees (enhanced well-being and engagement), there are potentially wider social benefits too.

Reduced commuting times due to fewer days in the office mean fewer cars on the road, less congestion and lower CO₂ emissions. Offices use less power and, if an organisation is growing, potentially feel less pressure to expand if a rotating day off is in place. 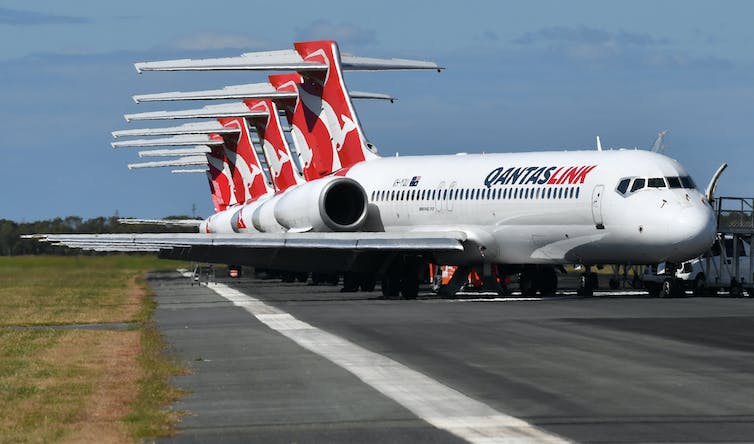 If supporting tourism is the goal, business owners might be encouraged to close for one day a week, ideally a Friday or Monday, perhaps in split shifts if they need to remain operating five days a week. This would maximise people’s ability to plan a three-day weekend of travel – potentially within a “trans-Tasman bubble”.

Read more: Why a trans-Tasman travel bubble makes a lot of sense for Australia and New Zealand[9]

Were Australian organisations to adopt a four-day week too it could significantly increase two-way traffic, enhancing both economies.

Paying workers 100% of their salary for 80% of a traditional working week while maintaining productivity would, in theory at least, increase opportunities for discretionary spending.

Combined with a patriotic call to use the extra time to support hospitality and tourism, it could align with the prime minister’s desire to find innovative ways to stimulate economic activity.

Healthier, happier and more productive workers helping other businesses stay viable? That sounds like a win-win for all.