“People of the same trade seldom meet together, even for merriment and diversion,” wrote Adam Smith in The Wealth of Nations[1] (published in 1776), “but the conversation ends in a conspiracy against the public, or in some contrivance to raise prices.”

With the coronavirus crisis, though, Australia’s competition watchdog has decided a little more conversation is in the public interest.

The Australian Competition and Consumer Commission is lightening up on its normal competition rules by giving interim authorisation for competitors to cooperate.

On Tuesday it authorised wholesalers of medicines[4] “to co-operate to facilitate distribution of essential medication and pharmacy products.

On Monday it authorised banks[5] "to co-operate to provide supplementary relief packages for individuals and businesses”.

And last week it authorised the major supermarket[6] chains (Woolworths, Coles, Aldi and IGA/Metcash) to coordinate their activities to ensure the supply of retail products, particularly those in short supply.

What is cartel conduct

Normally a competition watchdog guards against any collaboration or collusion between competitors. There are hefty fines and even criminal penalties to deter competitors talking to each other.

Cartel conduct[7] – agreements to fix prices, share markets, rid bids or control the amount of goods and services available to buyers – is arguably the biggest threat to a well-functioning competitive market.

Rather than competing on product quality, price and service, cartels maximise profits by agreeing to charge consumers more, pay suppliers less and putting the squeeze on other competitors. Competition officials have described cartels as “cancers on the open market economy[8]”.

But these are not normal times. The normal behaviour that allows markets to function has been thrown into flux. Panic buying of toilet paper, hand sanitiser, pasta and other staples has led to significant supply shortages. Video conferencing and streaming has led to a surge in broadband data use. 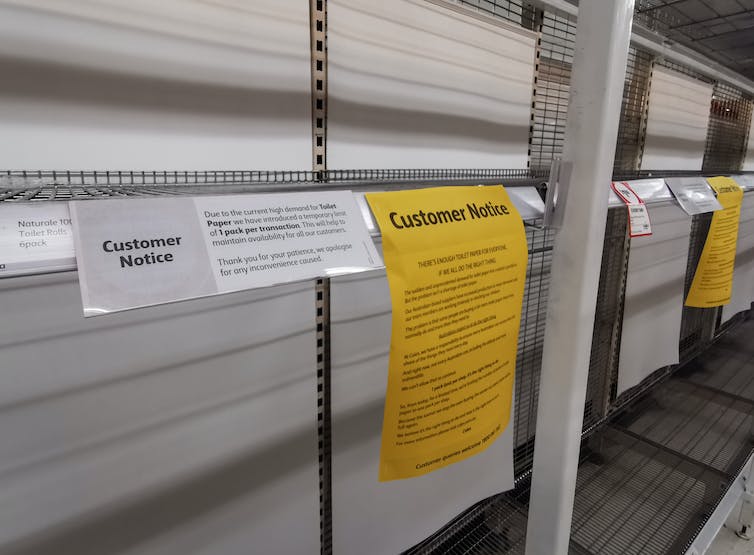 In these “unprecedented circumstances”, the watchdog has decided the benefits of permitting competitors to cooperate to secure the supply of essentials goods outweigh the risks.

History shows cartel conduct is tempting to companies in hard economic times. In fact, it’s even tempting to regulators. 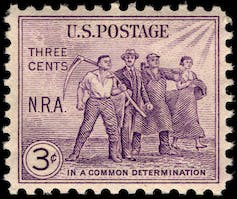 In 1933 the United States legalised cartel conduct with the National Industrial Recovery Act. The intention was to assist recovery from the Great Depression. Agreements to restrict output and fix prices were seen as a short-term solution to keep businesses afloat. It has since been argued the US law actually slowed the recovery[12] by converting “otherwise competitive industries into highly regulated, cartelised, and often inefficient industries”.

The US government’s mistake is not one the Australian Competition and Consumer Commission is making.

Its interim authorisations allow officials from the regulator and the federal government to monitor discussions. Every arrangement must be approved by the regulator. Everything is “out in the open”, eliminating a key feature for any cartel arrangement to succeed – secrecy.

Conditions now are also very different to those in 1930s America.

Then the issue was over-supply. Now it’s mostly a problem of undersupply, due to demand surges.

Read more: There's plenty of toilet paper – so why are people hoarding it?[13]

This is not a situation in which supermarkets, pharmaceutical companies and broadband providers have anything to gain through restricting supply.

They might have an interest in increasing prices. But the competition watchdog has expressly forbidden talk about retail prices.

European regulators are taking a similar approach to Australia. The European Commission has declared[14] it will not actively intervene against “necessary and temporary measures” to avoid supply shortage:

“Considering the current circumstances, such measures are unlikely to be problematic, since they would either not amount to a restriction of competition […] or generate efficiencies that would most likely outweigh any such restriction.”

Even so, there are risks. There are anti-cartel laws for good reason. The longer competitors spend working together, as Adam Smith noted, the greater the risk of conspiracy.

The competition watchdog will need to keep talks on a tight leash. Apart from price, it needs to ensure companies do not share information about operations and processes that would allow them to act independently in a mutually beneficial manner. This would give us exactly what cartel laws are meant to stop – higher prices.

Australia’s competition watchdog is arguably better equipped for this task than its European counterparts. But with more industry requests for competitors to cooperate likely, it will need to stay vigilant, making full use of its powers to monitor talks and ensure cooperation only goes on for as much, and as long, as absolutely necessary.