The worldwide pervasiveness of financial sector misconduct is an indication.

This is not a criticism of the Royal Commission as such. It had a limited mandate and limited time, although its approach of focusing on Australian case studies further limited its scope. And a broader investigation of economic and social underpinnings of financial sector misconduct would have required a different sort of Inquiry.

It’ll be hard to act on the report we had

Even then, any recommendations for fundamental changes to financial sector structure and activities needed to inhibit misbehaviour would have to run the gauntlet of gaining political support in the face of vested interests.

The response to, and government capitulation on, the Hayne recommendation regarding mortgage broking fees[2] starkly illustrates the point.

Why will the recommendations not be a lasting solution? An important reason is that the royal commission interpreted “behaviour consistent with community standards” in a limited way to refer to situations in which customers were actually harmed.

But much of community angst over financial sector conduct relates to the broader use of market power and superior knowledge to extract an “unfair” share of the benefits from transactions with customers.

And it missed the broader problem…

Customers don’t get a fair share of the benefits from transactions, competition doesn’t work to make sure they do, and customers are often unaware that they have been exploited.

Why is it happening? The answer lies partly in this comment of Royal Commissioner Kenneth Hayne on page 54 of his interim report[3]:

Economists will rightly argue that there is nothing inherently wrong with the pursuit of profit or self-interest. It facilitates the efficient allocation of resources.

But unless it is accompanied by a concern with fairness (“do unto others as you would have them do unto you”) in situations of market power and superior information, as typically occurs in financial markets, it will lead to vulnerable consumers being exploited.

…which is a grey zone of unfairness

It is difficult for (particularly large) institutions operating in that grey area, even if committed to “fairness”, to ensure their employees do not slide towards the boundary. Or over it.

Moreover, competition between financial institutions in search of profits can lead to a “race to the bottom” in terms of lower financial product quality. This is not always apparent to some (or many) consumers – at their expense.

The financial sector particularly vulnerable to this problem.

First, many financial products and services are “credence goods[5]” where the consumer needs them but is unable to assess their real worth either before or after the purchase.

A perfect example is a visit to the doctor. Often the reason we are visiting the doctor is because we don’t know what’s wrong with us. It makes it necessarily difficult or impossible to tell whether the doctor is good at her job.

Bankers sharpen their claws on each other

Second, much of the activity in financial markets is about trading and making profits (supposedly using superior information and expertise) at the expense of the another party in those markets.

Here’s how the Commission could have tackled these problems in order to achieve real, longer term benefits.

Yet we license them…

First, it could have considered whether giving financial institutions a valuable “social licence” to operate in important business areas under advantageous institutional structures should bring with it extra enforceable obligations.

It could have also considered whether, given the lack of misconduct found in the mutual and cooperative sector, banks and other financial institutions could be organised more like mutuals.

Second, it could have recommended changes that would have given stakeholders other than shareholders (such as depositors and employees) a greater say in running those organisations (perhaps at board level) and a say in shaping their culture.

…and we could change the way they’re run

Third, it could have recommended structural separation between the retail and wholesale arms of firms to reduce complexity and the risks of deficiencies in control systems.

Structural separation could have also reduced the risk that the culture of trading and position-taking, in which profits are made at the expense of another party, spilled over into other parts of the institution where it wasn’t wanted.

Finally, it could (and should) have concentrated more on consumer protection.

It is a much broader issue than deterring and penalising misconduct.

Until consumer financial literacy catches up with financial product innovation and complexity, there will continue to be a big “market for financial misconduct”.

Exhorting institutions to do no harm won’t take it away.

The arguments made in this paper are developed in more detail in “The Hayne Royal Commission and Financial Sector Misbehaviour: Lasting Change or Temporary Fix? Economics and Labour Relations Review[6], Vol 30 (2), June 2019. 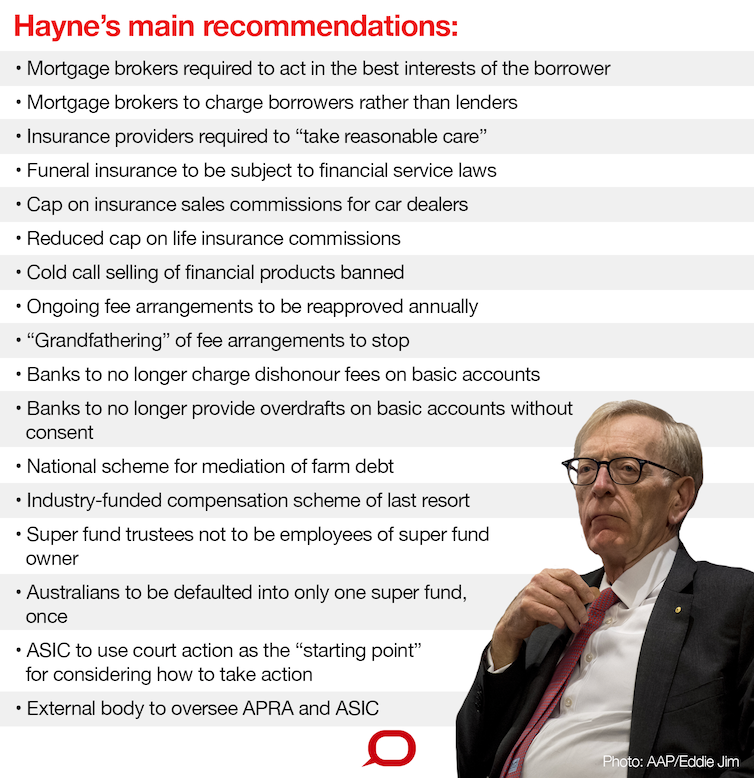