G20 leaders have pledged[1] to do “whatever it takes” to minimise the impacts of COVID-19.

Most of these nations are lumbered with welfare safety nets unfit for purpose. They are designed for last century, with a binary way of thinking about employment that’s no longer the experience of casual, contract and gig workers.

The limitations are being thoroughly exposed by a crisis further blurring the line between having or not having work.

A simple solution is a universal basic income – a regular payment to every adult, no questions asked.

Read more: Coronavirus: Why the UK needs a basic income for all workers[2]

The deficiencies of current welfare nets have been demonstrated in Australia over the past week. The nation’s social security system has been in meltdown as hundreds of thousands make new claims for government assistance.

There have been massive queues at Centrelink[3] offices. The government’s MyGov website has crashed and phone calls have gone unanswered. 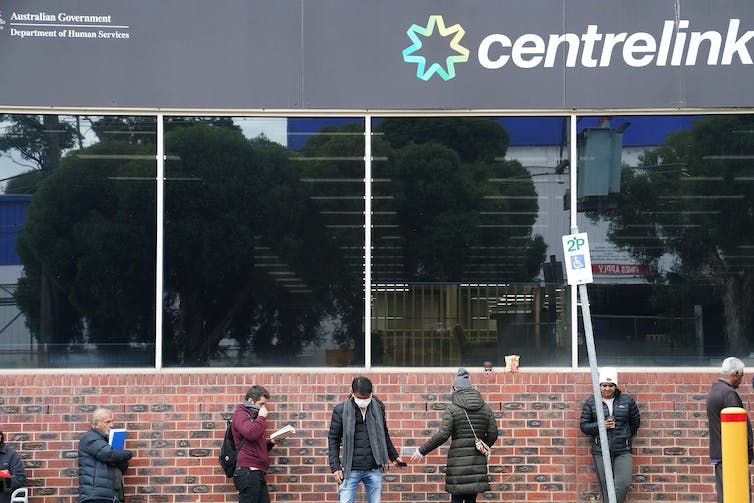 A queue outside a Centrelink office in Heidelberg, Melbourne, March 24 2020. Stefan Postles/AAP

These problems are more than logistical. They are also ideological, reflecting how the system has been conceived. It requires people to jump through bureaucratic hoops, filling in forms and providing documents and financial statements. It judges need according to a binary (employed-unemployed) way of thinking, with processes that are punitive and complex.

The universal basic income (UBI) is a well-developed idea to address these problems with existing social security regimes.

The basic idea is to make a regular cash payment to all adult individuals, no conditions attached. The intention is to ensure the welfare safety net reflects the fact many more people in informal, casual, part-time, portfolio, irregular and self-employed work face financial stress despite technically being employed. Everyone gets the means for a basic existence regardless of their employment situation.

Read more: Job guarantees, basic income can save us from COVID-19 depression[4]

Limited trials have occurred in Finland[5], Kenya[6] and Canada[7]. These have generally found recipients are happier and not disincentivised to look for work, a common criticism of the concept.

The most common criticism of the universal basic income is its cost. But now, with the need for income support spiking and governments adopting a “whatever it takes” approach to spending to keep economies afloat, this argument is not compelling.

The scale of the economic challenge is demonstrated by Australia’s unemployment predictions for the next six months jumping from 7% a week ago to 11%[8]. Government Services Minister Stuart Robert this week acknowledged the decision to close businesses had left “maybe a million people[9] unemployed overnight”. That million, on top of 700,000 already unemployed, would take the jobless rate above 12%.

In truth, much like the trajectory of the coronavirus, no estimates can be relied upon at this stage, other than to say unemployment levels will be very high. Along with pensioners and other welfare recipients, this means government financial support will be crucial for a significant proportion of households.

The advantage of a universal basic income scheme, especially now, is that it is simple and easily understandable.

It would be run through the Australian Taxation Office, not Centrelink. A direct payment would be made fortnightly into the bank account of all adult Australian citizens and permanent residents over 18 years and no longer at school.

The money would be taxable income, so the tax office would recoup a significant portion from higher earners. For now, it could exclude those over 65 years for whom long-standing pension and retirement systems exist and which we may not want to meddle with at this time.

But I’m going to make some ballpark calculations based on an emergency universal basic income payment of A$550 a fortnight.

This is equal to the bonus the Australian government is giving job seekers during the crisis (double their usual payment).

To extend this to 7.65 million[11] eligible Australians would cost about A$55 billion over six months. The government would recoup a portion of this, though, through income tax and being able to suspend some (but not all) existing welfare payments.

That compares with almost A$84 billion – about 3.5% of GDP – in spending already announced by the Australian government. About A$24 billion of this is for payments to welfare recipients, with the lion’s share directed to business and industry.

Read more: Scalable without limit: how the government plans to get coronavirus support into our hands quickly[12]

At a time of economic crisis unprecedented in our lifetimes, an innovative approach like a universal basic income could be an essential, simple, confidence-boosting and popular response.