Among the topics being investigated by the government’s retirement incomes review[1] is whether compulsory super contributions should be lifted from 9.5% to 12%.

Our research has identified two uncomfortable truths. One is that there is no “one-size fits all” correct contribution. The other is that 9.5% will be enough for most people, unless the aim is to replace the age pension.

It queries the need to lift lifting the contribution rate to 12%, and also the idea of having uniform compulsory contributions.

What our study did

We used what is known as a stochastic life-cycle model[2] to calculate the optimal level of super contributions for Australians at nine different income levels (ranging from A$30,000 to $150,000), applying existing tax, super and pension rules.

While necessarily limited, it is an advance on previous modelling that does not balance the loss of pre-retirement spending power against the income subsequently gained post-retirement. Household status, gender, assets outside of super and home ownership status also matter a lot, but are not directly modelled.

How much you need

The model produced a wide range of estimates[5].

Depending on income and other assumptions, the right amount of super contributions can be anywhere between about 3% up to 20%, although the higher levels typically assume away the age pension.

Some optimal super contributions by income level and objectives 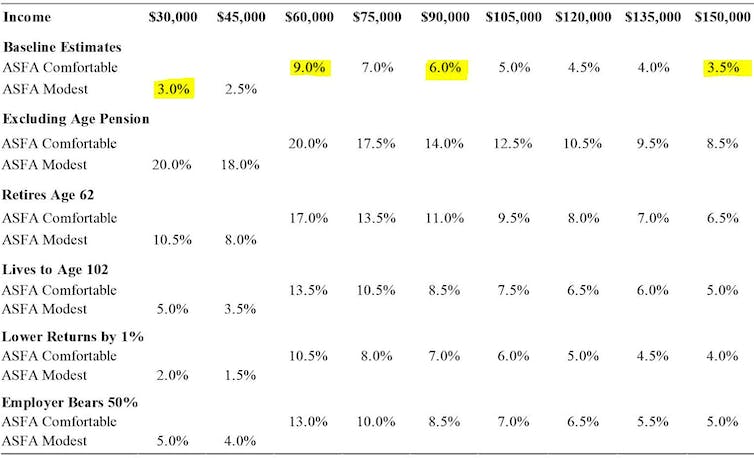 Source: The 'Right’ Level for the Superannuation Guarantee: A Straightforward Issue by No Means, Khemka and Warren, 2020[6] Two conditions could justify a higher contribution for all One condition that would justify a higher superannuation contribution would be a policy objective of replacing the age pension as far as possible. Our modelling reveals that even compulsory contributions of 12% might not even be enough to achieve this objective. The second is where super is used as a sort-of self-insurance mechanism in case things don’t go as planned. This could be because someone retires earlier than expected, lives longer than expected or gets lower than expected returns. Early retirement poses the biggest threat because it stops income before the pension becomes available, forcing retirees to use savings. The career breaks common among women have similar effects, although they have the chance to catch up on contributions later and may receive some income support during the break. Read more: Productivity Commission finds super a bad deal. And yes, it comes out of wages[7] The problem with saving more “just in case” is that it can result in over-saving if the feared risks don’t eventuate, unnecessarily forcing down pre-retirement living standards. There are other ways to addressing these risks, including through social security and various forms of insurance. The pension is one such mechanism, annuities are another. We would prefer to see policy makers explore insurance against risk rather than forcing everyone to save more.

Source: Australian Tax Office[8] The key point is that a “one-size-fits-all” contribution is a very blunt instrument, and an asymmetrical one. Employees can currently do nothing about an compulsory contribution rate that is set too high for them, but can add more if it is set too low. A higher compulsory contribution could help some if it was genuinely additional to wage increases and was paid for by employers (as is legally the case) rather than coming out of take-home pay via lower wage rises (as is often practically the case). We have no strong opinion on where the extra contributions would come from, but we note that the evidence is far from straightforward that employers will necessarily bear the cost. The retirement income review might try to find out. It might also like to consider our work, which calls into question the whole idea of a single contribution rate. Read more: 5 questions about superannuation the government's new inquiry will need to ask[9]