From Australian superstars such as Cate Blanchet, Russell Crowe, Chris Hemsworth and Nicole Kidman to Hollywood heavyweights including Ellen DeGeneres and Bette Midler, a lengthening list of celebrities are helping to shine a spotlight on Australia’s bushfires.

Some have donated large sums of money [1]and used social media to publicise their donations, encouraging fans to follow suit. Some have used their profile and platforms such as the Golden Globes awards to draw attention to the fires. Others are donating items for auction or appearing in charity events.

Read more: How to donate to Australian bushfire relief: give money, watch for scams and think long term[2]

For attracting attention and money to a cause, celebrity-driven attention is hard to beat. But there’s also a downside. If that interest is superficial and fleeting, it may actually hinder recovery efforts in disaster-ravaged regions.

Our research into disaster recovery efforts for Victoria’s Gippsland region[3] after the deadly “Black Saturday” fires in 2009 suggests celebrities’ best contribution needs to be in the weeks and months to come – and requires them putting “boots on the ground”.

Studies confirm the influence of messages from celebrities, be it brand choice[4], political opinion[5] or charitable giving[6].

It’s great that celebrities want to use their influence for good causes. Not all celebrity advocacy, though, should be applauded uncritically. One study has suggested it is less effective than sometimes supposed[7] for development causes, and can simplify a complex issue to a single outcome – usually giving money. This fails to address how people can make an ongoing difference in other ways.

In terms of natural disasters, a very practical way to help communities recover is the resumption of tourism. Perceptions play a big part in this, and celebrities can play a big part in forming images[8]. It’s why they have long featured in tourism campaigns, from Paul Hogan in the 1980s to Kylie Minogue and others in the humorously idealised imagery presented by Tourism Australia to Britons a few weeks ago.

Now these images are being replaced by the message globally that Australia is “on fire, literally[9]”, and that much of the country is an “apocalyptic nightmare[10]”.

Even if celebrities have the best of intentions, their emotional appeals and shared of images of red skies and smoke-filled cities along with heartbreaking images of devastation and loss can contribute to fans cancelling holidays plans, even while they’re donating to bushfire appeals.

There are already reports[11], for example, of tourists aborting plans for visits months away. The Australian Tourism Industry Council[12] says cancelled bookings in towns unaffected by the bushfires are up to 60%[13]. The Australian Tourism Export Council[14] estimates the loss of international bookings will cost the nation at least A$4.5 billion[15] in 2020, hurting regional areas the most. 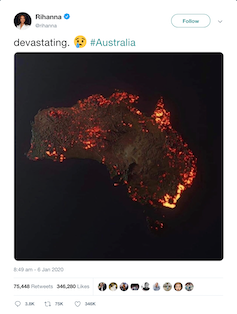 US singer Rihanna shared this graphic representation of the Australian bushfires, which was widely mistaken to be an image taken by a satellite. Twitter

It doesn’t help when misleading information[16] is spread, as the American singer Rihanna inadvertently did when she shared an image on Twitter[17] that exaggerated the size of the bushfires. This image suggested huge swathes of Australia were no-go zones.

Ellen Degeneres did something similar in telling her audience “nearly a third of their habitat has been destroyed[18]”. This was an exaggerated misstatement of Australia’s environment minister saying a third of koala habitat in New South Wales[19] had been destroyed.

Our research confirms[20] the further someone is from a destination in crisis, the more likely they are to be confused about the location and think a greater area is affected.

Read more: 6 things to ask yourself before you share a bushfire map on social media[21]

Fires in the Blue Mountains area of New South Wales, for example, were called “the "Sydney fires” elsewhere in Australia. Overseas they were referred to as the “Australian bushfires”, confusing domestic and international tourists.

Where celebrities can really help

So while celebrities might have the very best of motivations, their contribution in generating donations in the short term might be offset by the longer-term effect of amplifying the misconception that Australia is not safe for tourists. 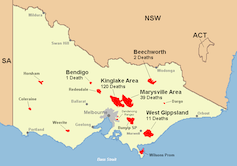 Affected areas and number of casualties from the 2009 Black Saturday bushfires. Gippsland covers all of Victoria east of Melbourne. Nick Carson/Wikipedia, CC BY-SA[22][23]

This is demonstrated by past experience. After Victoria’s 2009 Black Saturday fires, the the Gippsland region experienced a major tourism downturn, despite just 5% of the region being directly affected.

But celebrites can also use their mass-pull to aid tourism recovery.

Our research[24] suggests their star power is unmatched as a means to encourage tourists back to regions recovering from disaster.

In the case of Gippsland, we surveyed 691 people[25] with nine different advertising messages. Themes included solidarity, community readiness and even short-term discounts. We found celebrity endorsement made the greatest impression, with test subjects indicating it made them more likely to visit the region. 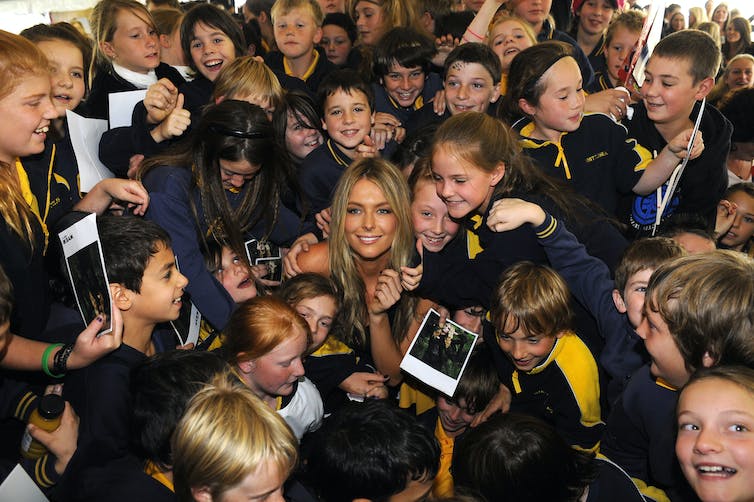 Model Jennifer Hawkins, Miss Universe 2004, poses with students in the town of Whittlesea, north of Melbourne, in May 2009, three months after the town was ravaged by bushfires . Julian Smith/AAP

So celebrities can definitely help in the coming weeks and months.

They can share positive stories about local communities’ resilience, and maybe even visit.

This is likely to do more for recovery efforts in the long term than helping to spruik for donations.