The Reserve Bank of Australia should follow the example of other central banks and be clearer about when and how rates will change, called “forward guidance”, to make its policy more effective.

At the moment the RBA follows an approach to implement monetary policy known as inflation targeting[1]. This means it has a numerical target for inflation (an average 2-3% inflation over the medium term) and a framework to achieve that target (how it thinks monetary policy affects the economy, and how it communicates policy decisions).

Australia’s cash rate is at a historical low of 1.5%. So if there’s any adverse shock to our economy (for example, a large correction in house prices), the RBA would have little room to reduce the cash rate before getting to 0% – the zero lower bound on nominal interest rates.

Read more: Can Australia stop interest rates from approaching zero? Only with a big shift in policy[2]

At that point, you can’t cut rates anymore. Research shows[3] economic shocks can have a more severe impact on economic activity when the policy rate is at, or near, zero.

Instead the RBA should be more explicit about the conditions that would lead to a rate change. Research shows[4] this has stimulated economic recovery before.

How rates work at the moment

To understand forward guidance it helps to understand conventional thinking about monetary policy. The RBA controls inflation by adjusting the cash rate, which is the interest rate on overnight loans in the interbank market.

Changes in the cash rate change longer-term interest rates in the economy. These then influence households’ and businesses’ spending and investment plans. These decisions also determine demand and inflation.

For example, suppose inflation is below target. A cut in the cash rate reduces longer-term interest rates, which encourages people to buy goods and services (falls in long-term deposit rates and government bonds reduce the incentive to save) and invest (commercial and mortgage loans are cheaper). Rising demand sends prices up, which brings inflation back to target.

Read more: Should banks be compelled to pass on interest rate cuts?[5]

As with other central banks around the world, the RBA also explains the rationale for its policy decisions. For example, in the Statement of Monetary Policy[6], released four times a year, the bank sets out its assessment of current domestic and international economic conditions, along with an outlook for Australian inflation and output growth.

The purpose of these announcements is to enhance the credibility of the inflation target. If people trust the RBA will implement policy to achieve the inflation target, they will make plans around what they spend and how they price goods and services based on this. This makes inflation easier to control.

How being clearer about rates helps

While the RBA might not be able to influence the current cash rate, it can still influence longer-term rates by making announcements about its future policy decisions. Long-term interest rates usually change depending on what people expect of future cash rate changes.

So if monetary policy can influence these expectations, it can move long-term rates.

Of course, words are cheap. To make these declarations credible the RBA would need to communicate its plans for the future cash-rate, with modelling and forecasts justifying those plans.

Economists could then judge whether the RBA is meeting its objective through good luck or good policy. If it’s through good policy, it enhances the RBA’s credibility and, in a virtuous circle, this gives the bank policy more influence over expectations.

A prominent example of forward guidance comes from the United States’ central bank, the Federal Reserve. In December 2008, when the federal funds rate (the US equivalent of the Australian cash rate) was first at the zero lower bound, the Federal Reserve announced[7]:

The committee anticipates that weak economic conditions are likely to warrant exceptionally low levels of the federal funds rate for some time.

Translated, the Fed anticipated keeping the federal funds rate at zero for a considerable time. This communication was meant to influence the public’s expectations about the future course of US monetary policy, and to have consumers and businesses expect an expansionary monetary policy for some time.

During the recovery, the Fed refined its communication strategy to become more explicit about the economic circumstances that would lead to a change in policy. For example, in June 2013, the committee that sets rates anticipated that[8]:

…this exceptionally low range for the federal funds rate will be appropriate at least as long as the unemployment rate remains above 6-½%.

This type of announcement gives people more information about the strategy the Fed will take with rates, rather than simply providing forecasts about what it expects future economic conditions to be like (which doesn’t need to have any information about policy strategy).

Recent evidence[9] confirms this had an impact on businesses’ expectations. Right after the June 2013 announcement by the Federal Reserve, there was an increase in the number of quarters until businesses expected the US policy rate to increase above 25 basis points. 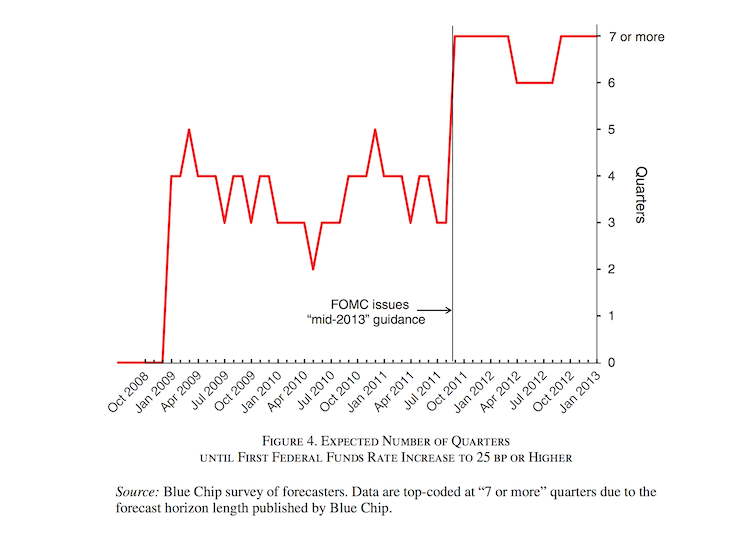 At the moment, the RBA doesn’t produce statements about future monetary policy and how this would change if the economic environment changed. But the bank could do this.

The RBA has the luxury to develop its communications policy during a time of economic calm, unlike the Federal Reserve, which was forced to experiment with new policies during the worst recession since the Great Depression.

If the RBA waits until a future crisis, it would limit the power forward guidance could have in our economy.