“Fake news”, the chief executive of Lufthansa has called it[1]. But his counterpart at Air France calls it the airline industry’s “biggest challenge[2]”. So does the president of Emirates[3]: “It’s got to be dealt with.”

What they’re talking about is “flight shame[4]” – the guilt caused by the environmental impacts of air travel. Specifically, the carbon emissions. 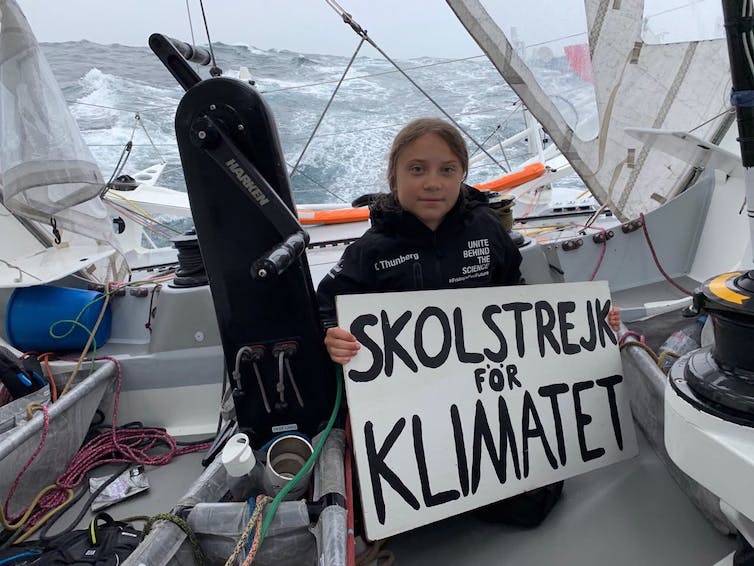 A publicity photo of Greta Thunberg on her way to New York aboard the yacht Malizia II in August 2019. The phrase ‘skolstrejk för klimatet’ means school strike for climate. EPA

In Thunberg’s native Sweden, flight shame (“flygskam”) has really taken off, motivating people to not take off. Last year 23% of Swedes reduced their air travel to shrink their carbon footprint, according to a WWF survey[6]. Swedish airport operator Swedavia reported[7] passenger numbers at its ten airports in October were down 5% on the previous year.

The potency of this guilt is what put Lufthansa’s head, Carsten Spohr, on the defensive at an aviation industry conference[8] in Berlin in November.

“Airlines should not have to be seen as a symbol of climate change. That’s just fake news,” he declared. “Our industry contributes 2.8% of global CO₂ emissions. As I’ve asked before, how about the other 97.2%? Are they contributing to global society with as much good as we do? Are they reducing emissions as much as we do?”

Does he have a point? Let’s consider the evidence.

How bad are aviation CO₂ emissions?

The International Council on Clean Transportation[10] (the same organisation that exposed Volkwagen’s diesel emissions fraud[11]), estimates commercial aviation accounted for 2.4% of all carbon emissions from fossil-fuel use in 2018.

So it’s true many other sectors contribute more[12].

It is also true airlines are making efforts to reduce the amount of carbon they emit per passenger per kilometre. Australia’s aviation industry, for example, has reduced its “emissions intensity” by 1.4% a year[13] since 2013.

However, the ICCT estimates growth in passenger numbers, and therefore total flights, means total carbon emissions from commercial aviation have ballooned by 32% in five years, way faster than UN predictions[14]. On that trajectory, the sector’s total emissions could triple by 2050.

A revolution in aircraft design could mitigate that trajectory. The International Air Transport Association suggests the advent of hybrid electric aircraft propulsion (similar to how a hybrid car works, taking off and landing using electric power) by about 2030-35 could reduce fossil fuel consumption by up to 40%. Fully electric propulsion after that could eliminate fossil fuels completely.

Read more: Get set for take-off in electric aircraft, the next transport disruption[15]

Even with the advent of electric airliners by mid-century, the huge cost and long lifespan of commercial jets[16] means it could still take decades to wean fleets off fossil fuels.

A shorter-term solution might be replacing fossil fuels with “sustainable aviation fuels” such as biofuels made from plant matter. But in 2018 just 15 million litres of aviation biofuel[17] were produced – less than 0.1% of total aviation fuel consumption. The problem is it costs significantly more than standard kerosene-based aviation fuel. Greater use depends on the price coming down, or the price of fossil fuels going up. 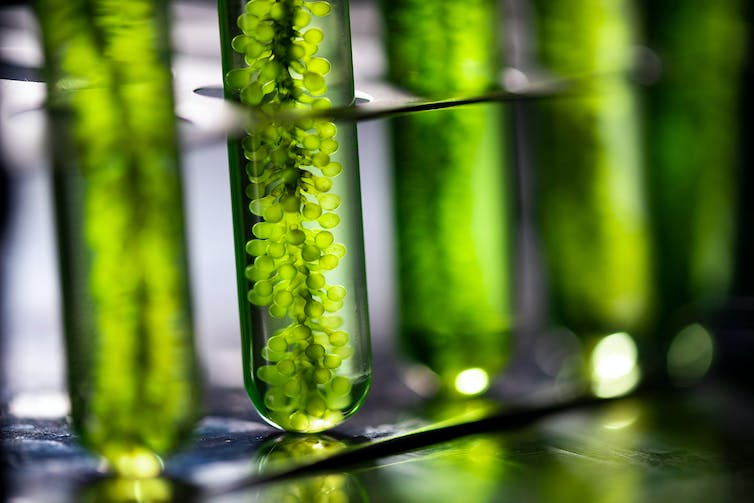 Research into biofuels made from algae and other plant matter could prove a viable alternative to fossil fuels. Right now, though, cost is a major hurdle to uptake. www.shutterstock.com

This brings us to the role of economics in decarbonising aviation.

An economist will tell you, for most goods the simplest way to reduce its consumption is to increase its price, or reduce the price of alternatives. This is the basis of all market-based solutions to reduce carbon emissions.

One way is to impose a tax on carbon, the same way taxes are levied on alcohol and tobacco, to deter consumption as well as to raise revenue to pay the costs use imposes on society.

The key problem with this approach is a government must guess at the price needed to achieve the desired reduction in demand. How the tax revenue is spent[18] is also crucial to public acceptance.

In France, opposition to higher fuel taxes[20] led the government to instead announce an “eco-tax[21]” on flights.

This proposed tax will range from[22] €1.50 (about A$2.40) for economy flights within the European Union to €18 (about A$29.30) for business-class flights out of the EU. Among those who think this price signal is too low to make any real difference [23] is Sam Fankhauser, director of the Grantham Research Institute on Climate Change and the Environment[24] in London.

Greater outcome certainty is the reason many economists champion an emissions trading scheme (also known as “cap and trade”). Whereas a tax seeks to reduce carbon emissions by raising the price of emission, a trading scheme sets a limit on emissions and leaves it to the market to work out the price that achieves it.

One advantage economists see in emissions trading is that it creates both disincentive and incentives. Emitters don’t pay a penalty to the government. They effectively pay other companies to achieve reductions on their behalf through the trade of “carbon credits”.

The European Union already has an emissions trading scheme[25] that covers flights within the European Economic Area[26], but it has been criticised for limiting incentives for companies to reduce emissions because they can cheaply buy credits, such as from overseas projects such as tree-planting schemes. 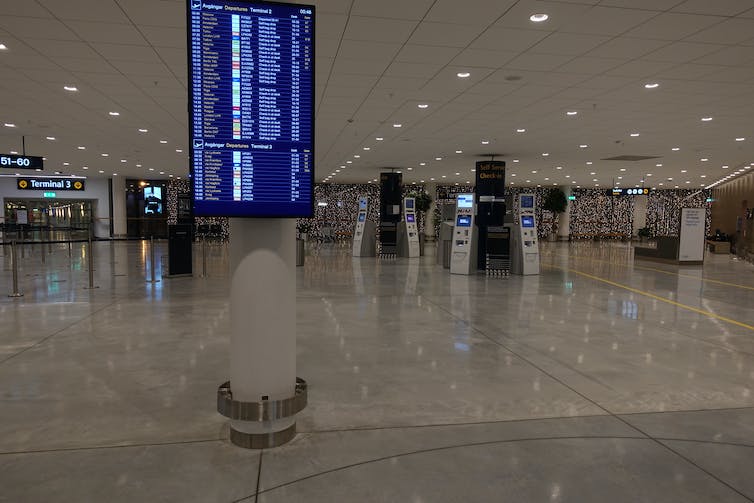 This led to the paradox of scheme delivering a reported 100 million tonnes[27] of “reductions/offsets” from Europe’s aviation sector between 2012 and 2018 even while the sector’s emissions increased[28].

A better solution might come from a well-designed international trading scheme. The basis for this may be the global agreement known as the Carbon Offsetting and Reduction Scheme for International Aviation[29]. Already 81 countries, representing three-quarters of international aviation activity, have agreed to participate[30].

What seems clear is that guilt and voluntary action to reduce carbon emissions has its limits. This is suggested by the data from Sweden, the heartland of flight shame.

Behind the 5% reduction in passenger numbers reported by Swedavia is a major difference between domestic passengers (down 10%) and international passengers (down just 2%). That might have something to do with the limited travel alternatives when crossing an ocean.

For most of us to consider emulating Greta Thunberg by taking a sailboat instead, the price of a flight would have to be very high indeed.