The banning of a Sportsbet advertisement featuring a “foolish” blonde beauty pageant contestant is a rare win against sexism and stereotypes in advertising.

Ad Standards[1], which adjudicates complaints about adverts, has ruled the “foolproof[2]” advert contravenes the Australian Association of National Advertisers’ Code of Ethics[3] by depicting material in a way that discriminates against or vilifies a section of the community on account of gender. 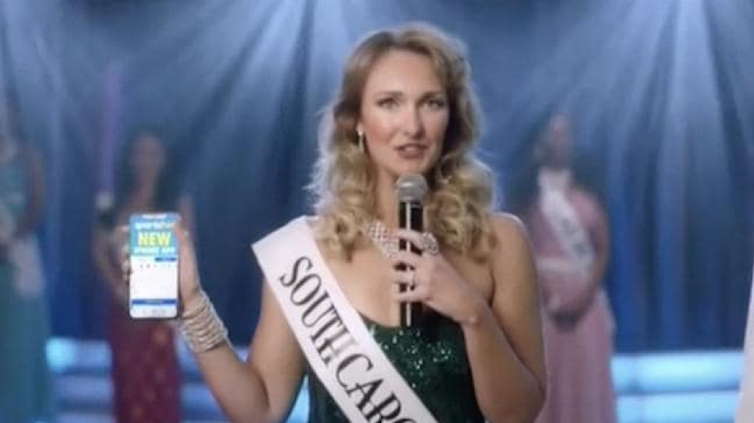 Our research suggests the advertising industry’s standards for judging sexism are, like the world depicted in the television series Mad Men, stuck in the past.

We showed advertisements to ordinary men and women who agreed the adverts traded in outdated and undesirable sexism and gender stereotypes. Yet many of those adverts were cleared by Ad Standards as conforming to the industry’s ethical code.

One of the biggest problems is the code only considers ads in isolation. It doesn’t take into account their cumulative effect.

In our research, a partnership between RMIT University and Women’s Health Victoria, we explored community responses[5] to gender portrayals in advertising by holding ten focus groups with 46 women and 28 men in metropolitan and regional Victoria. As part of the process we asked participants to discuss advertisements that had attracted complaints or media attention.

An example is the 2016 “Fit In” advert from General Pants Co, showing young women in states of undress alongside fully clothed young men.

Australia’s advertising industry code permits sexualised poses if women are shown to be ‘confident and in control’.

Such imagery, as one woman in our study put it, suggests “women aren’t good enough on their own, like they need to show some sexualisation”.

Yet Ad Standards dismissed complaints against the “Fit In” ad because the industry code does not consider sexualised poses degrading if women are shown to be “confident and in control[7]” – and in this case the women were “standing in a confident manner[8]”.

Read more: Honey Birdette and the changing attitudes to sex in advertising[9]

This is despite more than 130 studies over the past 20 years[10] indicating sexualised or idealised images of women in advertisements damage women’s self-esteem and satisfaction with their bodies, and that this can occur[11] even when women are shown as sexually powerful and in control.

Further, experimental studies suggest[12] exposure to sexualised images of women leads both women and men to have “a diminished view of women’s competence, morality and humanity”.

Our focus group participants noted the pervasiveness of gender stereotypes in advertising. Women are shown as homemakers, mothers or sex objects. Men are portrayed in more action-oriented roles and associated with leadership and power.

A perfect example is this ad for Sofitel Brisbane showing a couple eating breakfast in bed. He is reading the Australian Financial Review. She is reading a Chanel coffee table book. 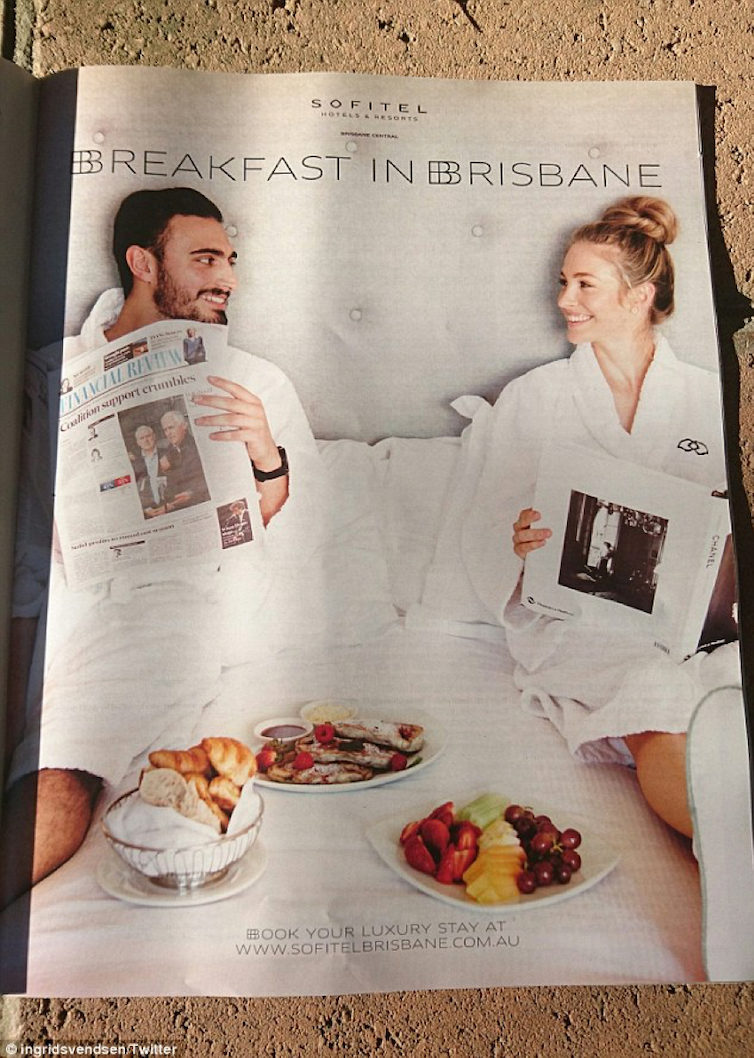 Sofitel Brisbane made a meal of its marketing by misreading community expectations with this advert.

There was a swift backlash against this ad when it was published in October 2018. As a result Sofitel Brisbane apologised and withdrew it.

But had it gone to Ad Standards adjudication, more than likely complaints about it would have been dismissed.

This is because the industry code[13] accepts using gender stereotypes to “simplify communications” so long as they “are not always associated with that gender, the only options available to that gender, or never carried out or displayed by another gender”.

The reason[15] was because “the woman in the advertisement wasn’t seen to represent all adult women, rather it was an exaggeration of a cliché of hairdressers being full of advice”.

In contrast to the Australian code, Britain’s Advertising Standards Authority[16] is now obliged to consider the cumulative health impacts of portrayals. This recognises the pervasiveness of these types of portrayals perpetuate problematic gender norms.

As one woman in our study stated: “I think one ad itself cannot be harmful, but when you see thousands of these ads, especially for young girls and boys […] they see what the standards are for when they grow up.”

This means the British regulator is more likely to ban ads perceived to objectify women, such as this example from British air-conditioning company Not Just Cooling[18]. 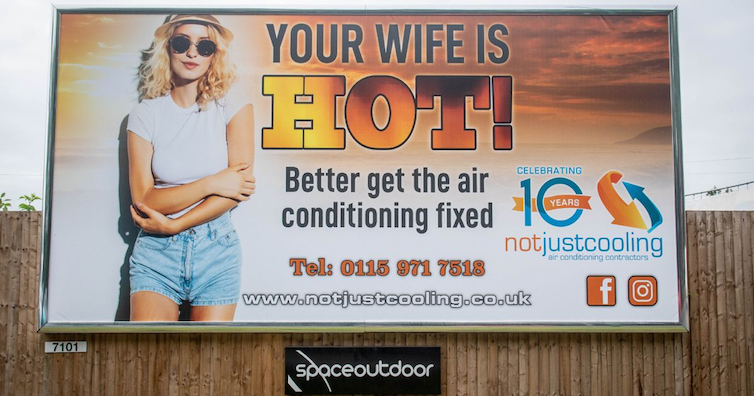 Britain’s advertising regulator decided this advert breached its rules on social responsibility and harm and offence.

Our research highlights that people want more responsible advertising. The industry has acknowledged a need to review its code of ethics[19]. That’s a start. But something else to learn from Britain to address sexist advertising[20] is the value of a co-regulatory system that doesn’t leave the industry to set its own rules.

In the 1960s advertisers were blissfully unaware of the impacts of casual sexism and stereotypes. We now have ample evidence it’s not just harmless fun. It’s time for the industry to show it’s not living in the past.