Skilled migration, a mainstay of Australia’s economic and population policies, should be a win-win.

But our research suggests[1] the skilled migration program is failing to achieve its full economic potential, dashing personal dreams in the process. Many skilled migrants are simply not finding the opportunities they anticipated.

Read more: Australia's jobs and migration policies are not making the best use of qualified migrants[2]

Our survey of more than 1,700 skilled migrants living in South Australia found 53% felt they were not utilising their skills and abilities, with 44% working in a job different to what they nominated in their visa application.

About 15% reported being unemployed at the time of the survey or for most of their time in Australia – double the South Australian jobless rate. This was despite having skills deemed by government planners to be in short supply.

Our results indicate a big mismatch between the expectations of new migrants and the reality of the labour market – in the jobs available and in employer expectations. In short, the skilled migration program simply isn’t working the way it is supposed to.

The majority of Australia’s immigration intake is intended to benefit the economy. Out of about 178,000 permanent visas granted in 2017–18[3], about 111,000 were for migrants with skills. (A further 64,000 skilled migrants were granted temporary visas.)

Of those 111,000 visas, about 35,000 were employer-sponsored, meaning visa holders had a guaranteed job. About 7,000 were business investment visas, meaning migrants were bringing enough money to employ themselves and others.

The majority – about 68,000 – were part of the General Skilled Migration (GSM) program, based on having skills deemed in short supply. The federal government’s “Skilled Occupation List[4]” now covers more than 670 occupations, from “Aboriginal and Torres Strait Islander Health Worker” to “Zoologist”.

Aspects of the GSM program[5] are designed to attract migrants to areas other than Sydney, Melbourne and Brisbane. One way it does this is through the State-Specific Regional Migration scheme, where state or territory governments can nominate a migrant for a visa. The scheme requires living in a defined area within that state or territory (for at least two years).

Read more: Migrants want to live in the big cities, just like the rest of us[6]

In 2017-18, 27,400 of the 68,000 points-tested visas were state/territory-nominated visas – an increase from less than 24,000 the previous year. Thus these visas, channelling migrants towards the smaller cities and regional areas, are an increasingly significant part to the skilled migration intake.

Between 2010 and 2014, some 7,500 migrants came to South Australia on such visas. Our survey collected information about the employment experiences on more than 2,000 of them (culled down for various reasons). We did in-depth interviews with 20 participants.

In our survey sample nearly 70% had professional qualifications. This compares to just 20% of the general South Australian population. There was also a high rate of technical and trades skills.

Despite this, success in getting a job matching their qualifications was mixed. The unemployment rate, as noted, was twice the state average. A further 15% reported being underemployed, working fewer hours than they would have liked.

For those who found a job, 44% reported not being in the occupation in which they had experience, and 54% said they were in a role that did not fully utilise their qualifications. 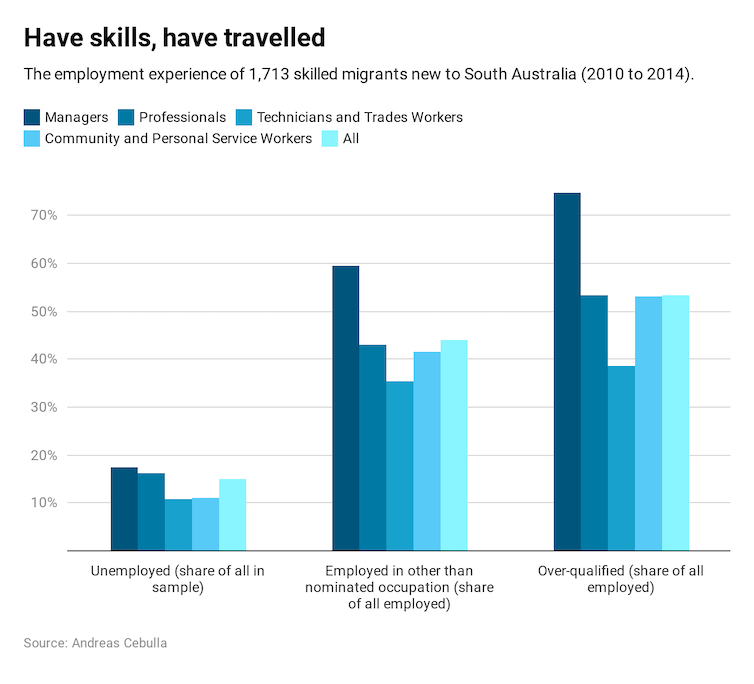 CC BY-NC-SA[7] In the interviews we did, many expressed frustration and disappointment about how things had turned out. Given the expense and ordeal of obtaining a GSM visa and then moving to Australia, many had expected the visa would lead automatically to a job. There was also a widely held view that Australian employers discriminated against hiring anyone who didn’t have have local experience. Migrants thus found themselves in a classic Catch-22 situation – they couldn’t get local experience because they didn’t have local experience. 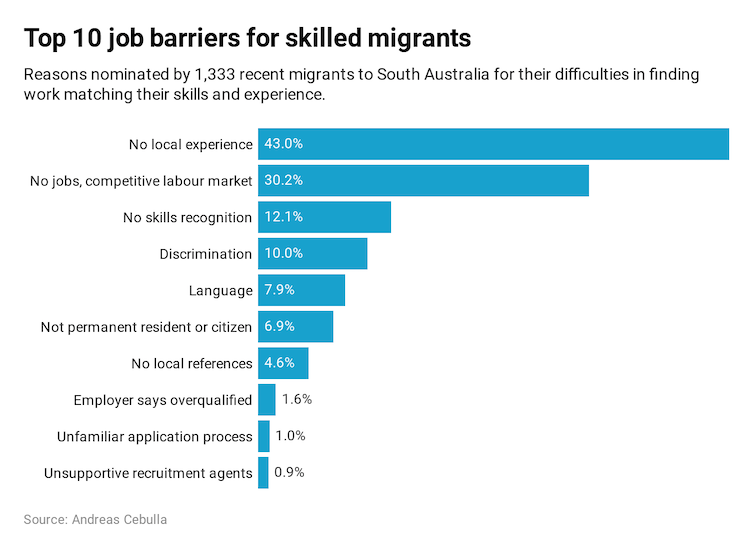 CC BY-NC-SA[8] Other perceived barriers were that the jobs simply didn’t exist, that employers did not recognise overseas qualifications, or were reluctant to hire them because they were foreign and lacked fluency in English. A clear disconnect These findings point to a clear problem with the General Skilled Migration Program. Migrants are being drawn to Australia on the basis their skills are needed, but many are finding employers reluctant to hire them. The whole methodology that underpins the program – with state and territory sponsorships that implicitly encourage aspiring migrants – needs to be revisited. This is effectively acknowledged by the South Australian government, which warns that “State nomination does not guarantee employment in South Australia and applicants must compete in the local job market”. Read more: The regions can take more migrants and refugees, with a little help[9] For the program to work as intended, federal and state governments need to face up to the disconnect between their identification of skill shortages and employers’ unwillingness to employ new migrants.