For most people the second week in October probably doesn’t hold much promise.

Longer days for some, perhaps. But for those is us in the economics profession, come the second week of October we’re furiously compiling lists and discussing odds - about who is likely to win the coveted Nobel prize in Economics.

More formally known as the “Sveriges Riksbank Prize in Economic Sciences in Memory of Alfred Nobel”, the prize has been awarded since 1969 for outstanding contributions to the field of economics.

The puzzle of who receives the novel prize is in itself a bit like an equation.

It often depends on who else is in the running and the chosen field is cyclical. It’s highly unusual for the prize to be awarded to theorists from the same field several times in a row.

Age plays a factor too, both because the prize cannot be awarded posthumously and because the younger you are, the less likely you are to be in contention because you’ve got years more in which to make a contribution.

Which makes this years’ winners remarkable.

At 46 (ten days shy of 47) Esther Duflo is the youngest recipient of the award in its 51 year history and only the second female.

This year’s trio of winners – Abhijit Banerjee, Esther Duflo and Michael Kremer[2] received the Nobel for “their experimental approach to alleviating global poverty”.

By designing experiments at a small level, they were able to provide real world answers about what works in alleviating poverty.

In doing it they sought to actually understand the lives of the people they were trying to help.

He found that the impact on test scores from the textbooks (and the induced enrolment of students) was zero[3].

Duflo and Banerjee spell out what works and explain how small interventions can create lasting change in their important book Poor Economics: A Radical Rethinking of the Way to Fight Global Poverty[4]. 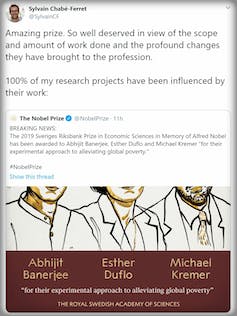 Along the way they’ve created a movement. Their work with the Abdul Lateef Jameel Poverty Action Lab[5] (J-PAL) inspired a new generation of economists to see, and search for, impact in their research. During my own time in economics, I have lost count of the number of students who said they wanted to work in development economics in part because of J-PAL. Some took to Twitter to say it was the only reason[6] they took up development economics. And women matter Beyond that the prize is going to inspire a generation of female economists who have long been sidelined in university economics departments, both as students as academics. It is well known that the often harsh and abrasive way academic economists treat each other and confront each other in seminars is unhelpful to the image of the profession. And it is likely that we are seeing this reflected in the low take-up of economics by women[7]. The pipeline of female economists is leaky at all stages – graduate studies, assistant professorships, tenure and beyond. As a result, not many women make it to the top of their professions, and even fewer are recognised. It’s is not only an American problem. Analysis I have conducted of economics departments across Australia[8] finds very low proportions of women on academic staffs. Read more: Why women in economics have little to celebrate[9] At one major university only one in 16 professors was female – a mere 6.25%. The ratio improved further down the promotion ladder. If you were to Google economists in Australia, the images that would come up would be mainly men[10], even more so than in economics departments themselves. The Australian economics profession could learn a lot from those overseas where there is growing recognition that the combative nature of the field puts off minorities (including women) who could make valuable contributions. This does economists, and the entire field of economics, a huge disservice.