Australia’s gender pay gap is diminishing, says a new report, but some contributors to it seem harder to overcome than others. For me, the finding hit close to home.

The report breaks down the economics to some very specific factors. Overall, two-thirds of the decline is credited to diminishing industrial and occupational segregation.

Proving harder to erode is “gender discimination” (which the report defines as that portion of the pay gap unexplained by other factors) and the impact of career interruptions. For women, time out of the workforce is generally to care for young children or other family members, the report states, with such interruptions being “gendered and highly persistent”. 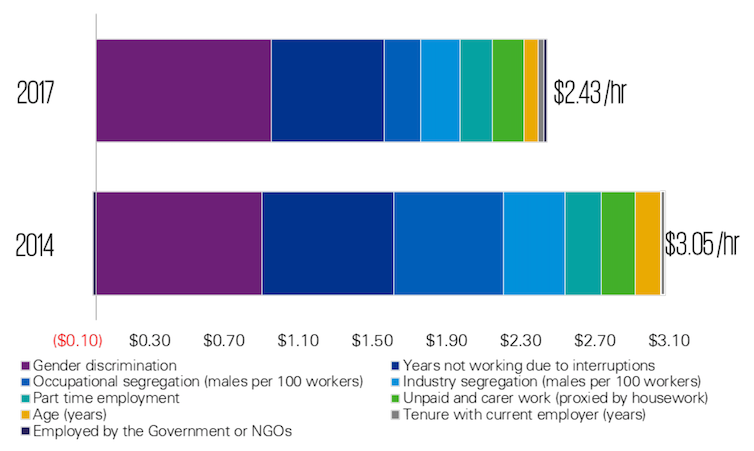 As an academic, working architect and chair of a national committee for gender equity[2], I’ve been engaged with discussions and research about what holds women back in their careers. The data shows[3] many women leave the profession in the their late twenties or thirties and never return. This is hardly unique.

There is a lot of talk about what can be done through government and corporate policy to welcome women back to the workforce. That’s all good, but I’ve also been thinking about how we can address the issue more holistically.

I have been reflecting on the sudden gender divide that happened when I gave birth to my first child. My husband and I had gone to university together and worked together. We both considered ourselves fierce feminists. Yet when we started our family it was an almost instant shift to gendered roles: I gave up full-time work, and he stayed in full-time work.

At the time if seemed the efficient thing to do. We both thought it was just a phase. But it has been harder to shift than we first imagined.

I see four traps we can easily fall into at home and work that reinforce the gender pay gap. 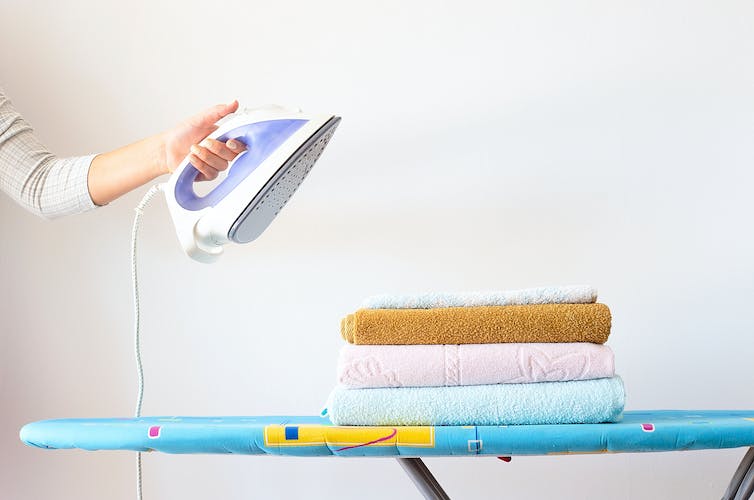 www.shutterstock.com 1. Being the home-maker Breastfeeding binds women and children and ensures we stay close. But when not performing this miracle of sustenance, we are often looking for other ways to be the perfect mother and home maker. We turn our attention, energy and intelligence to conquering the domestic situation in full. Cooking, cleaning, washing and ironing slowly but surely become our responsibility as the person who is at home the most. The pattern once set is hard to change. Studies in countries with paid parental leave, such as Sweden[5], show that when housework and child care are divided more evenly at the beginning of a child’s life, that division is likely to be maintained at a more equitable rate in the longer term, and be associated with women having a higher participation rate in paid work. 2. Counting childcare costs Returning to work is usually preceded by weighing the relative costs and benefits of time away from the baby with a desire for meaningful paid work. Most of us will also factor in the costs of childcare. But comparing the cost of childcare and associated domestic assistance against the amount of money the woman will earn is one of the biggest mistakes we, and our partners, can make. This isn’t something that should be considered just as an immediate cost. It’s a long-term investment[6] in ensuring both parents have the chance to progress their careers. 3. Devaluing part-time work Many women I know have returned to work part-time or started their own small business because they want the flexibility to fit their work around looking after children. Their partner meanwhile maintains the consistent full-time role as main financial provider. The danger for those of us in this position is that we the ones who drop everything. Our work is thus disproportionately affected and devalued. Read more: Women aren't better multitaskers than men – they're just doing more work[7] 4. Reverse sexism The last trap is thinking only mothers need support to balance the demands of working and parenting. Fathers need it to – just in different ways. Organisations like the Workplace Gender Equality Council help ensure there is now a lot of fantastic support to women to take maternity leave, return to work when they are ready, and have flexible work arrangements. We need more support for men to unshackle themselves from the demands of full-time jobs – often working overtime and sacrificing time with their family for the sake of the family. Our kids don’t just need mothering. They need parenting. Until paternity leave and flexible workplace arrangements are not only available but taken by both women and men, the gender pay gap will persist. By avoiding these traps we might help dismantle some persistent contributors to the gender pay gap. It’s not wholly in the hands of individuals, or families, or companies, or governments to change these dynamics. For the social good, it’s a project we should all be working on.