There is consensus among New Zealand policymakers and researchers that GDP is not a good measure of a nation’s well-being. But the debate about what metric should replace GDP is ongoing.

Last week’s well-being budget[1] was based on the Livings Standards Framework (LSF[2]), a set of well-being measures that include cultural identity, environment, income and consumption, and social connections. But these provide no overall index of the nation’s performance.

Our research uses the Genuine Progress Indicator (GPI[3]). It shows[4] that by that measure, New Zealand may be only half as well off[5], compared to conventional measures such as GDP.

Read more: New Zealand's well-being approach to budget is not new, but could shift major issues[6]

Accounting for costs and benefits of economic activity

Globally, the GPI is the most widely used method to replace GDP[7]. It is essentially a macro-scale analysis of the costs and benefits of activities associated with economic activity. It includes personal consumption of goods and services as one of the largest benefits, but it balances this with costs, which may include social factors such as income inequality and environmental factors such as water pollution and the emission of greenhouse gases.

We show that overall, on a per capita basis, New Zealand’s GDP has increased by 91% since 1970. But the GPI gives a more accurate measure of the nation’s well-being, an increase of only 53%.

Personal consumption is the highest value in both GPI and the GDP during the 1990s. It grew strongly with an improving economy, but there is a widening gap between GDP and GPI because of the increasing cost of environmental problems and other externalities, such as the high cost of increasing commuting time.

Read more: It's time to vote for happiness and well-being, not mere economic growth. Here's why:[8]

Sustainability as the beacon

The struggle to find something better than GDP has a long history in New Zealand. The first attempts to find a GDP replacement were heavily influenced by the idea of sustainable development as an overarching concept of societal progress. In 2002, the Ministry for the Environment[9] commissioned a review of headline indicators[10] for tracking progress towards sustainability. This identified seven factors that were considered critical for successful indicators of progress. Of the 33 indicators reviewed, two were eventually implemented: the ecological footprint[11] and the genuine progress indicator.

In 2008, towards the end of the Labour government term, Stats NZ[12] developed a conceptual framework for measuring progress towards a “sustainable development approach[13]”. This substantive work did not come up with a replacement for GDP, but instead listed trends under 15 topic areas, grouped under the themes of environmental responsibility, economic efficiency and social cohesion. From an analytical standpoint, it was hard to see how this laundry list of indicators explicitly linked to the concept of sustainable development, which this tool set was purportedly measuring.

With the National Party coming to power in 2009, sustainability literally became a banned concept. All the work on sustainability was halted and, in many cases, annihilated. The Ministry for the Environment removed commissioned reports on ecological footprints[14] from its website.

From 2011, Treasury began developing the Livings Standards Framework (LSF[15]) as an alternative to GDP. Many took notice as Treasury, one of the last true believers in GDP, was questioning its usefulness as the indicator of national progress. The framework[16] is based on the idea that four capitals – human, financial, social and natural – provide the basis for “intergenerational well-being”. It includes 12 measures of well-being. 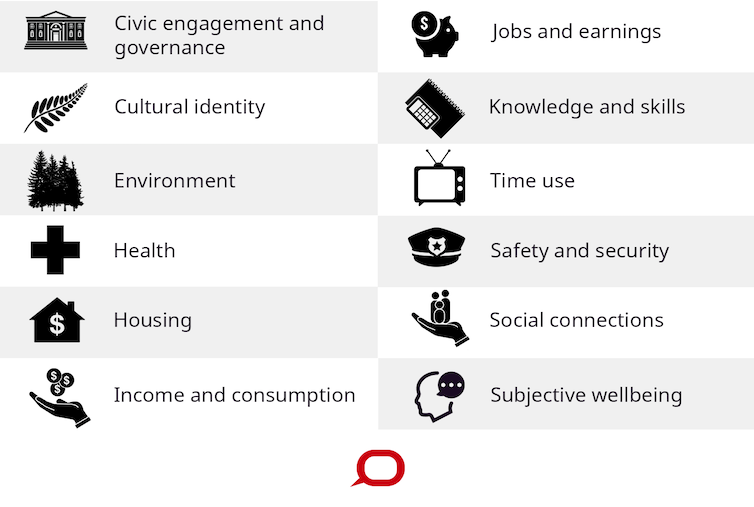 CC BY-SA[17] The theoretical underpinnings of this framework are diverse, drawing on concepts of sustainability as well as a capabilities framework, as outlined in economist Amartya Sen[18]’s 1985 book Commodities and Capabilities[19]. Treasury released the well-being indicators last year. Unfortunately, when you drill down into the detail of these indicators, you realise that, in many cases, they are very subjective and dependent on how survey questions are framed. For example, there are subjective questions like “the perceived state of New Zealand’s environment on a 1 to 5 scale”. In my view, that could be much better answered if hard environmental data, like water quality indicators, were used. The living standards indicators also provide no guidance on whether the country is worse off or better off in an overall sense. The data is deliberately disaggregated and there is no attempt to come up with an overall index of the nation’s performance. Progress indicators for the regions From 2007 onwards, there were a number of useful attempts by central and local government to develop workable progress indicator systems. The Waikato Regional Council, developed a composite index for their region[20], covering economic, social and environmental aspects of progress. The Wellington Regional Council’s index[21] was derived by adding up 85 equally weighted indicators covering economic, environmental, social and cultural well-being. The struggle to find a replacement for GDP has not led to any firm conclusions, and one can’t ignore the role of politics at both a government and inter-departmental level. Governments of various persuasions have attempted to impose their own view of what a GDP replacement would look like. Until this situation stabilises, and there is an enduring and robust replacement that is accepted by all, then by default GDP will continue to be the pre-eminent indicator of the nation’s progress.