Over the past decade the profits of 160-odd regional and rural publications that make up the former Fairfax business division known as Australian Community Media (ACM) have fallen steeply[1].

Nine Entertainment Co acquired the division with its $3 billion takeover of Fairfax Media last year. It has been keen to get rid of it ever since[2].

There are grounds for some optimism about the long-anticipated sale[3]. It may signal better fortunes for regional publishing. But any optimism must be tempered by ongoing concerns about the viability of the local news business model.

What’s in the deal?

ACM’s new owner is a 50:50 partnership between real estate advertising mogul Antony Catalano and Thorney Investment Group. They are paying Nine A$125 million for the 160-odd mastheads and 130 associated websites. The deal involves Nine getting $10 million of advertising space, and content and printing sharing arrangements for a period of time.

Thorney Investment Group has established itself over the past 25 yeas as one of the most profitable investors in Australian property and resources. Its foray into local news may appear somewhat peripheral to its general investment profile, despite an ongoing investment in Domain, Fairfax’s real estate brand, which was listed as a separate entity on the Australian Stock Exchange[4] in 2017.

Catalano, on the other hand, has a long and colourful history with Fairfax’s real estate classifieds business. He is expected to chair the new company.

A one-time property editor at The Age, he was made redundant in 2008 and went on to found, with the backing of major real estate brokers, the free property magazine The Weekly Review.

The magazine took off, winning business away from The Age’s real estate pages. In 2011 Fairfax bought half of Catalano’s Metro Media Publishing business for A$35 million[5]. It bought the other half in 2015 (for A$72 million[6]). It then merged the business with Domain, putting Catalano at the helm.

He left his role with Domain in January last year, just two months after its successful listing[7] on the Australian Stock Exchange. Reportedly his resignation came amid complaints of a party-boy culture[8] in the Domain workplace. 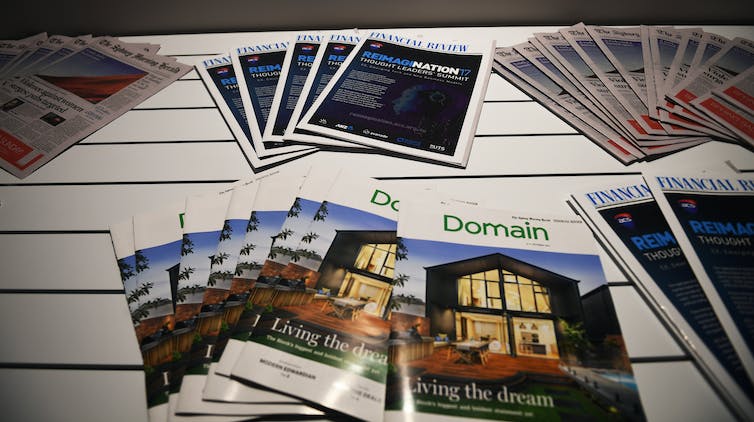 Catalano’s successful bid for Domain is a particular coup. He attempted to thwart Nine’s takeover bid[9] of Fairfax at the 11th hour by proposing to buy 19.9% of Fairfax shares.

Bidding against him and Thorney were private equity giants Anchorage Capital Partners and Allegro Funds. Seven West’s regional TV affiliate, Prime Media Group, and News Corp were also rumoured to have been interested.

A few months ago Crikey labelled ACM’s impending sale a “blueprint for disaster[10]” regardless of who won the bid, describing closures and consolidation of some local papers as “almost certain”.

Catalano, on the other hand, has talked up the potential of the larger daily regional mastheads. These include The Canberra Times, The Newcastle Herald, The Border Mail (based in Albury), The Illawarra Mercury (in Wollongong), The Ballarat Courier, The Examiner (in Launceston), and the Bendigo Advertiser. Between them, these papers reach about half ACM’s total audience of up to eight million[11] people.

Catalano says he is looking to invest “aggressively[12]” in these areas.

Without offering much detail, he has intimated[14] there were ways to monetise ACM’s audience that didn’t happen under Fairfax, due to it having “bigger priorities in the face of very significant structural decline in the newspaper business”.

“Under us, it’s our only priority,” he said.

However, when pushed on whether there would be efficiencies, including redundancies and closures, he conceded there was likely to be some “consolidation” in print operations[15].

The state of local journalism

It would be naive to be overly hopeful about a new dawn for regional newspapers given the broader context of the Australian news industry.

According to the journalists’ union, the Media Entertainment and Arts Alliance, at least 3,000 journalism jobs[17] have been lost since mass redundancies began about seven years ago. Cutbacks, the union says, have seen “rural and regional audiences lose their "voice” and their access to local information".

At the regional daily with the largest readership, The Newcastle Herald, the editorial staff has been cut from about 100 to less than 24.

Read more: What a local newspaper means to a regional city like Newcastle[18]

Workloads have escalated in consequence. Veteran journalist and union rep Ian Kirkwood told ABC’s Media Watch[19] that journalists, perhaps once expected to produce one or two news stories a day, were now required to produce six, including headlines and photographs.

The New Beats study, a comprehensive longitudinal study[20] of redundancies in Australian journalism since 2012, calculates the total revenue of Australian newspapers fell[21] from A$6.2 billion in 2007-08 to A$3 billion in 2016-17.

The New Beats researchers say the “market failure of regional journalism” is that local advertising is simply insufficient to make a local newspaper financially viable. How Catalano is going to change that, given his stated opposition to paywalls[22], is an open question.

But given the unrelenting bad news faced by newspaper newsrooms over the past decade, it’s no surprise journalists are hoping for the best. The ABC reports[23] that sources within the Canberra Times regard the deal as the best of available options. The Media Entertainment and Arts Alliance has expressed cautious optimism, tempered by concerns[24] investment in the larger regional mastheads will come at the expense of smaller publications.

Only time will tell whether it is the hopes or the fears that are the most prophetic.