Right now Greg Combet is arguably the most powerful man in Australia.

Earlier this month the former trade unionist and federal politician declared his intention[1] to transform Australian business. His radical idea: to promote the concept of “long-term value”.

Combet is chairman of Industry Super Australia, which represents 16 of Australia’s biggest industry funds and thus the vast bulk of the A$630 billion[2] saved by more than 11 million Australians.

These super funds would use their massive clout as investors to transform corporate culture, Combet told the Australian Financial Review. He wants business to focus on long-term sustainability, not be “hostage to the short-term share price or six-monthly profit announcements”.

Read more: With a billion reasons not to trust super trustees, we need regulators to act in the public interest[3]

“The energy sector is an example of where long-term thinking is needed,” he said. “We have to start making a significant transition from old coal-fired power plants to renewable energy generation and distribution.”

But his ambition is much broader than this one controversial issue.

Not everyone is happy about the idea of industry super funds, which have strong links to trade unions, pushing companies to focus on environmental, social and governance performance.

Heather Ridout, a former head of the Australian Industry Group who now chairs the AustralianSuper fund, has told Frydenberg to stop politicising super[5].

Combet says his agenda has nothing to do with “activism”.

He’s right. His ideas really aren’t that revolutionary. In other parts of the world they would simply be regarded as responsible investor behaviour. 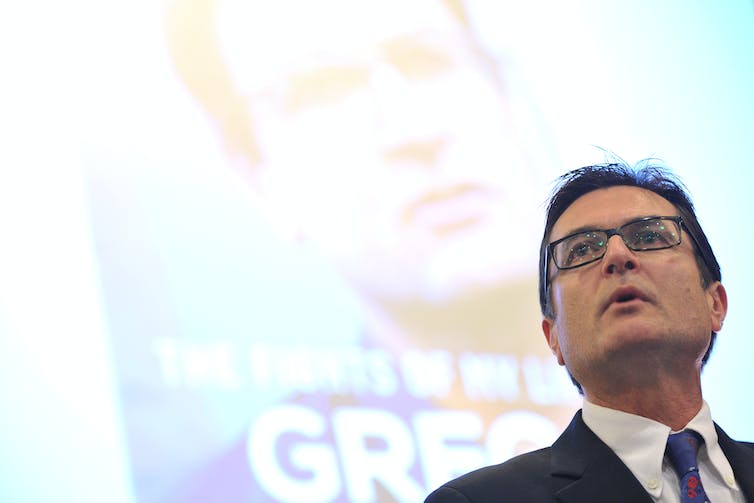 Greg Combet at the launch of his political memoir, The Fights of My Life, in July 2014. Paul Miller/AAP

Australian super funds have a legal obligation to manage their members’ funds for the long term.

Up to now this has not necessarily translated into funds directly and consistently communicating their long-term interests to company boards. Combet’s declaration signals this is going to change.

There is plenty of research[6] to suggest this will be a good thing.

Investors who help companies focus on the long term thus help themselves. It is a virtuous circle.

According to the ASX Corporate Governance Council[7], not known for revolutionary subversion, the issues that effective boards must now take into account include “culture, conduct risk, digital disruption, cyber-security, sustainability and climate change”. There are others coming.

In the wake of the revelations of the banking royal commission, it would be irresponsible for the heads of superannuation funds to sit by as passive observers and not direct boards to these issues.

Globally, institutional investors, governments and companies are working together to move beyond solving specific issues such as corporate social responsibility, sustainability reporting and ethical investment.

Read more: What is corporate social responsibility – and does it work?[8]

In fact, the United Nations Principles of Responsible Investment initiative, boasting more than 7,000 corporate and investor signatories, exhorts[9] investors to go beyond “strictly financial benefits” and engage with companies on environmental, social and governance factors. Integrated approaches[10] are at the forefront of practice.

Australia has been lagging behind. So for Combet to spell out a clear ambition to harness the power of the superannuation sector for long-term thinking is significant.

Perhaps he senses the opportunity to lead changes to the Australian economy, and society, that were out of reach during his 19 months as federal industry minister.

He wields immense power in a sector with even greater latent power. Superannuation assets now total A$2.7 trillion[11], and funds own about half of Australian shares[12]. If Combet can leverage Industry Super Australia’s fund bloc to get the ball rolling, the momentum could be truly ground-breaking.

We will now see which of Australia’s economic elite join his mission and collaborate in building global momentum. Those who want to resist, or who cannot organise themselves to participate, should know the clock is now ticking.