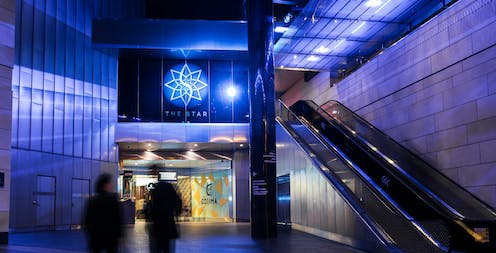 The independent inquiry[1] into Star Entertainment Group, operator of The Star casino, has found it “not suitable” to hold a New South Wales casino licence.

This follows a similar finding against Crown Resorts in NSW in 2021 (and in Victoria and Western Australia since).

Star is also facing an inquiry in Queensland[3], where it operates two casinos, with a third – at Queen’s Wharf Brisbane – on the way.

The litany of malfeasance at its Sydney casino is on par with (and perhaps even greater than) Crown’s, with the inquiry overseen by Adam Bell SC finding it threw its doors open to irresponsible gamblers and criminal infiltrators for years.

The chief of NSW’s new casino regulator, Philip Crawford, said Star’s “institutional arrogance[4]” was “breathtaking”. It had knowingly facilitated money laundering, and made no effort to work out what it needed to fix about its organisational culture.

Whether Star can now satisfy him it can learn now may determine if it gets to keep its licence.

But just as important as it fixing its culture is the wider issue of fixing the failed regulatory and political culture that has allowed institutional corruption to flourish.

The report cites a litany of failures by the company to adhere to anti-money-laundering and counterterrorism regulations.

One was allowing A$908 million over seven years to pass through the casino in contravention of anti-money-laundering rules, fabricating receipts to hide the truth.

This involved allowing guests at the complex’s hotel to buy casino chips using China UnionPay credit cards and recording the transactions as hotel-related expenses. This breached China UnionPay’s ban on its cards being used for gambling.

The Star also appeared to deliberately mislead its banker, NAB. When the bank queried such transactions, including at the request of China Pay, Star executives made “false, misleading and unethical communications”.

Another breach of anti-money-laundering rules was to allow a junket operator, SunCity, to run a private gaming room (known as Salon 95) with its own “cage” (where cash is exchanged for casino chips).

The cage operated from 2018 until 2021 – ending only after the arrest in China of SunCity’s principal, Alvin Chau, in December 2021[5]. The report says Star knew enough to close Salon 95 and end its relationship with SunCity at least three years earlier.

The report concludes Star’s risk-management processes were deficient, and the overall culture poor.

Executives failed to take issues seriously and communicate them promptly and accurately to the board of directors. The board in turn failed to properly address issues of which directors were aware.

Among the report’s recommendations is introducing a gaming smart card that will enable the casino (and authorities) to track all gambling activity.

Crawford said all options were on the table, and that the Independent Casino Commission would not hesitate to close The Star down if it does not show cause for keeping its licence.

The commission replaced the Independent Liquor and Gaming Authority[6] as casino requlator only last month. The regulatory overhaul[7] also includes higher penalties for breaches (to a maximum of $100 million) and clarifies the regulator’s powers to suspend or cancel a casino licence.

Victoria introduced similar legislation[8], and a new gambling regulator[9], in the wake of its royal commission.

But is this enough?

What about the regulatory culture?

This inquiry, as with the others, further exposes a culture of gambling regulation bent to the influence of gambling operators.

The activities of Star (and of Crown) took place over many years, under the nose of regulators. None of revelations triggering these inquiries came from regulators. They came from whistleblowers and investigative journalists, with the assistance of concerned politicians such as Andrew Wilkie.

Regulators have been nobbled by limited resources, lack of political support and even bullying by gambling operators.

Read more: Responsible gambling – a bright shining lie Crown Resorts and others can no longer hide behind[10]

Donations[11], revolving door appointments[12], relationship-building (with promises of significant state revenue) and, in some cases, outright political campaigning[13] has beaten politicians into submission.

From cosy lunches[14] with a power media figure and a NSW premier[15], to opaque preferential deals[16] for prime real estate, and repeated “memoranda of understanding[17]” between NSW’s pokie clubs and the state government, Australian political culture needs major reform