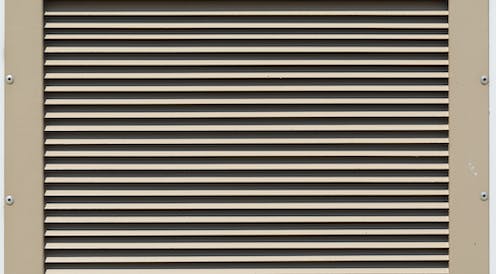 If COVID-19 had taught us anything it surely must be that poorly ventilated buildings can be a health hazard. Yet due to a weakness in current rules they continue to be built.

This is because the Code requires windows that can be opened for natural ventilation, but nothing requires them to be opened in service.

And where the Code requires mechanical ventilation (fans or air conditioning) it is possible to build a hospital where the air that is supplied to patient rooms travels back to the air conditioning unit via corridors. A recent design in Footscray[2] is typical.

This means that visitors, patients and health care workers have to travel through airborne effluent from unwell people to reach them.

Rules for water, few for air

The Code’s revised Indoor Air Quality Handbook[3] is now out for consultation[4].

The handbook is a guide for practice that is meant to go beyond the bare bones of the Code.

The revisions include nothing that would ensure indoor air was free from particulates, carcinogenic gases such as nitrogen oxide and benzine, pathogens such as bacteria, mould and fungal spores, or viruses – such as COVID-19.

Read more: Poorly ventilated schools are a super-spreader event waiting to happen. It may be as simple as opening windows[5]

The Code and Handbook say buildings can be “deemed to satisfy” air quality requirements if they provide one of two things:

But no law or regulation prevents the construction of a naturally-ventilated building that can be operated with its windows shut.

In a home, opening and shutting windows is within the control of the occupant.

But in a publicly accessible building, occupants normally are unable to control windows, and in winter or summer they are often shut to control the temperature.

Worldwide, pre-COVID, acute respiratory illnesses such as colds and influenza caused an estimated 18 billion upper airway infections and 340 million lower respiratory infections every year, resulting in more than 2.7 million deaths[7] and economic losses in the billions.

More broadly, tiny particles with widths as small as small as 2.5 microns[8] (PM 2.5) were responsible for more than four million[9] deaths each year.

Read more: I live in an apartment. How can I cut my risk of getting COVID?[10]

Good ventilation and high-efficiency particulate absorbing filtration could have prevented much of it.

This ought to be fixed at the top, with national indoor air quality standards that progressively apply to all buildings accessed by the public.

Ideally, the standards would include upper limits for all contaminants, down to and including a width of 2.5 microns.

These contaminants include bacteria, viruses, pollen and spores as well as particulates from bushfire smoke, vehicles and combustion processes.

Ventilation should also be sufficient to ensure that gaseous contaminants generated by building contents and indoor activities stay at safe levels.

Relatively inexpensive and reasonably accurate handheld devices[13] are now available to measure contaminants and could be used to monitor compliance.

Portable CO2 meters are not expensive.

Schools ought to be the first priority.

Many schools operated by state and Catholic education systems suffer from a massive shortfall in capital spending, contrasting with Rolls-Royce provisions at many high-fee private schools.

Nearly all state and low-fee schools operate in buildings in which heating, ventilation and air conditioning is an overlay on a natural ventilation.

Usually, these systems just recirculate air, or worse, in the case of unflued gas heaters, pollute it. Teachers ought not to be placed in the position of having to choose between thermal comfort and good ventilation.

This should not mean windows are set so they are always open. It should mean the building is safe even if the windows are shut.

This will cost money[14], but the benefits to children are likely to outweigh the costs.

The revision of the Indoor Air Quality Handbook is an opportunity for the Building Codes Board to start reforming the code so it takes health into proper account, rather than continuing to kick the can down the road.