Price is the most delicate element[1] of the marketing mix, and much thought goes into setting prices to nudge us towards spending more.

There’s one particularly cunning type of pricing strategy that marketers use to get you to switch your choice from one option to a more expensive or profitable one.

Imagine you are shopping for a Nutribullet blender. You see two options. The cheaper one, at $89, promotes 900 watts of power and a five-piece accessory kit. The more expensive one, at $149, is 1,200 watts and has 12 accessories. 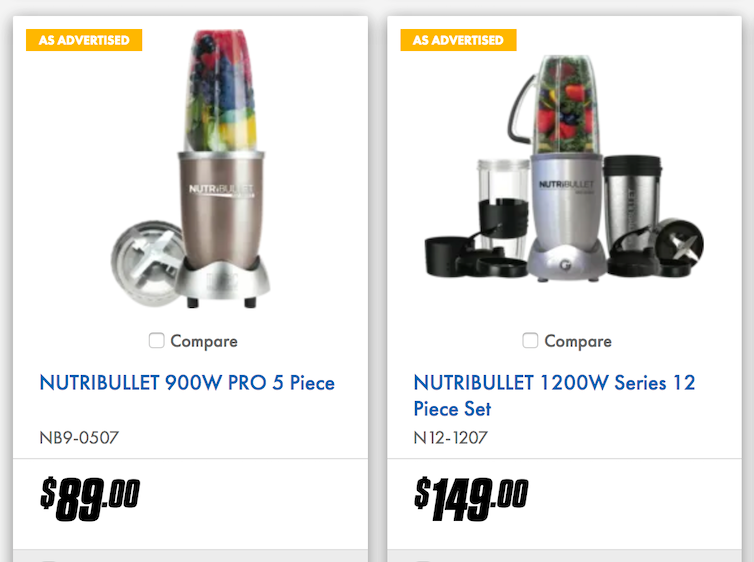 Which one you choose will depend on some assessment of their relative value for money. It’s not immediately apparent, though, that the more expensive option is better value. It’s 50% more powerful but costs almost 80% more. It does have more than twice as many plastic accessories, but what are they worth? Now consider the two in light of a third option.

This one, for $125, offers 1,000 watts and nine accessories. It enables you to make what feels like a more considered comparison. For $36 more than the cheaper option, you get four more accessories and an extra 100 watts of power. But if you spend just $24 extra, you get a further three accessories and 200 watts more power. Bargain! You have just experienced the decoy effect. Asymmetric dominance The decoy effect is defined as the phenomenon whereby consumers change their preference between two options when presented with a third option – the “decoy” – that is “asymmetrically dominated”. It is also referred to as the “attraction effect” or “asymmetric dominance effect”. What asymmetric domination means is the decoy is priced to make one of the other options much more attractive. It is “dominated” in terms of perceived value (quantity, quality, extra features and so on). The decoy is not intended to sell, just to nudge consumers away from the “competitor” and towards the “target” – usually the more expensive or profitable option. The effect was first described by academics Joel Huber, John Payne and Christopher Puto in a paper[3] presented to a conference in 1981 (and later published in the Journal of Consumer Research[4] in 1982). They demonstrated the effect through experiments in which participants (university students) were asked to makes choices in scenarios involving beer, cars, restaurants, lottery tickets, films and television sets. In each product scenario participants first had to choose between two options. Then they were given a third option – a decoy designed to nudge them toward picking the target over the competitor. In every case except the lottery tickets the decoy successfully increased the probability of the target being chosen. These findings were, in marketing terms, revolutionary. They challenged established doctrines – known as the “similarity heuristic[5]” and the “regularity condition[6]” – that a new product will take away market share from an existing product and cannot increase the probability of a customer choosing the original product. How decoys work When consumers are faced with many alternatives, they often experience choice overload – what psychologist Barry Schwartz has termed the tyranny[7] or paradox of choice[8]. Multiple behavioural experiments have consistently demonstrated[9] that greater choice complexity increases anxiety and hinders decision-making. In an attempt to reduce this anxiety, consumers tend to simplify the process by selecting only a couple of criteria (say price and quantity) to determine the best value for money. Through manipulating these key choice attributes, a decoy steers you in a particular direction while giving you the feeling you are making a rational, informed choice. The decoy effect is thus a form of “nudging[10]” – defined by Richard Thaler and Cass Sunstein (the pioneers of nudge theory) as “any aspect of the choice architecture that alters people’s behaviour in a predictable way without forbidding any options”. Not all nudging is manipulative, and some argue that even manipulative nudging can be justified if the ends are noble[11]. It has proven useful in social marketing to encourage people to make good decisions[12] such as using less energy, eating healthier or becoming organ donors. Read more: 'Nudging' people towards changing behaviour: what works and why (not)?[13] In the market We see decoy pricing in many areas. A decade ago behavioural economist Dan Ariely[14] spoke about his fascination with the pricing structure of The Economist[15] and how he tested the options on 100 of his students. In one scenario the students had a choice of a web-only subscription or a print-only subscription for twice the price; 68% chose the cheaper web-only option. They were given a third option – a web-and-print subscription for the same price as the print-only option. Now just 16% chose the cheaper option, with 84% opting for the obviously better combined option. In this second scenario the print-only option had become the decoy and the combined option the target. Even The Economist was intrigued by Ariely’s finding, publishing a story about it entitled “The importance of irrelevant alternatives[16]”. Subscription pricing for The Australian[17] today replicates this “irrelevant alternative”, though in a slightly different way to the pricing architecture Ariely examined. 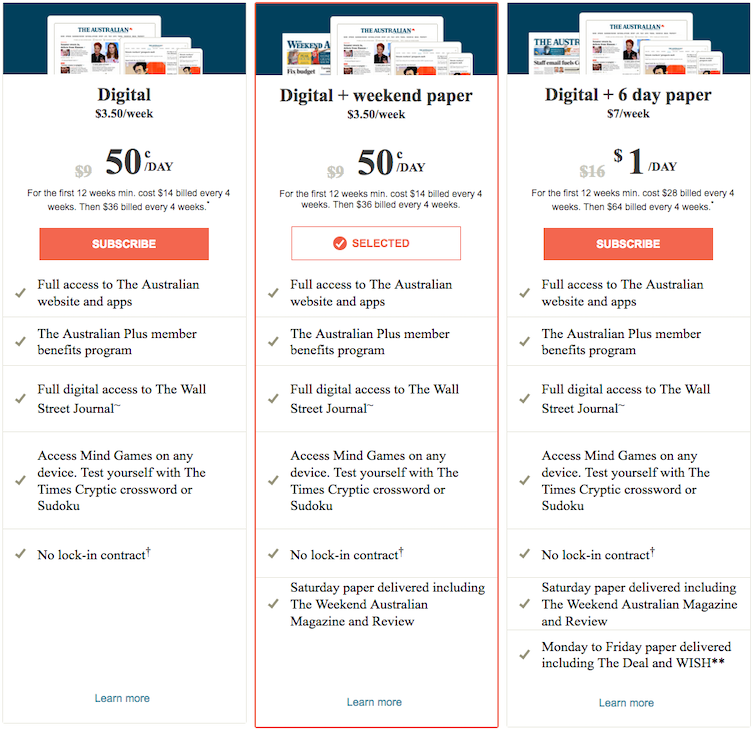 Why would you choose the digital-only subscription when you can get the weekend paper delivered for no extra cost? In this instance, the digital-only option is the decoy and the digital+weekend paper option is the target. The intention appears to be to discourage you from choosing the more expensive six-day paper option. Because that option is not necessarily more profitable for the company. What traditionally made print editions profitable, despite the cost of printing and distribution, was the advertising they carried. That’s no longer the case[18]. It makes sense to encourage subscribers to move online. Not all decoys are so conspicuous. In fact the decoy effect may be extremely effective by being quite subtle. Consider the price of drinks[19] at a well-known juice bar: a small (350 ml) size costs $6.10; the medium (450 ml) $7.10; and the large (610 ml) $7.50. Which would you buy? If you’re good at doing maths in your head, or committed enough to use a calculator, you might work out that the medium is slightly better value than the small, and the large better value again. But the pricing of the medium option – $1 more than the small but just 40 cents cheaper than the large – is designed to be asymmetrically dominated, steering you to see the biggest drink as the best value for money. So have you just made the sensible choice, or been manipulated to spend more on a drink larger than you needed?