It’s been an enormous year for the financial services industry.

First there was a Productivity Commission report[1] calling for major changes to superannuation, then a Senate inquiry into financial services targeted at Australians at risk of hardship[2], and now the final report of the Royal Commission into Misconduct in the Banking, Superannuation and Financial Services Industry[3].

And it’s only February.

Yet all three investigations either missed something big or failed to take it sufficiently seriously.

It’s the plight of Australians in remote Indigenous communities.

As if to inoculate himself against such criticism, Commissioner Kenneth Hayne made it clear in his preface that it would have been impossible to hear every case and that inevitably there would be disappointment.

As a consequence, the (relatively privileged) voices that were heard didn’t properly reflect the hardships, vulnerabilities and lives of those far away from the centres of finance, yet increasingly dependent on them as their lives become ever more financialised.

There is not always an understanding within remote Indigenous communities – whether because of language or financial literacy skills - that ATMs attract a A$2.50 fee every time they are used, including to check balances. This often isn’t the case in cities where ATMS are operated by banks.

But in remote locations with only one or two ATMs, they are usually third-party operations, run for profit. It is not uncommon for people waiting for funds to appear in their accounts to check multiple times, draining the account until they find something there. 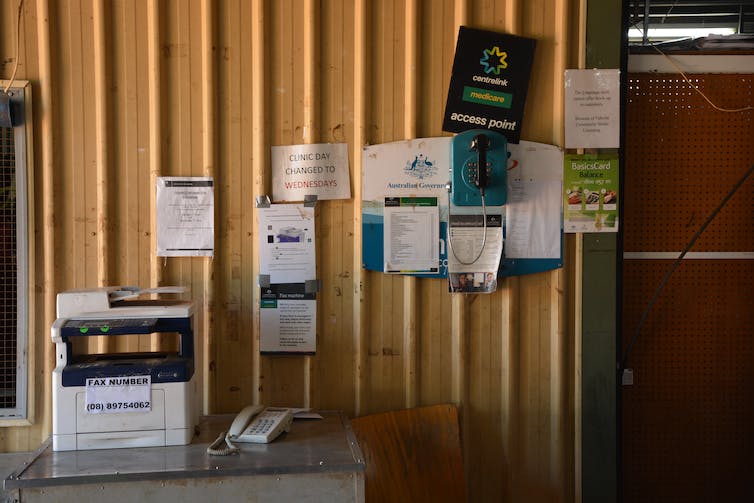 The only government access point and only phone and only internet service in Urapunga, Northern Territory. J. Louth

While the main report makes generic reference to ATM fees, it is only in the appendices where the question is touched upon.

The Bankers Association is well aware of it.

It conducted a limited two-year trial of free ATMs that concluded at the end of 2017, and was then extended[4].

It raises a telling question: if there was a recognisable problem and a recognisable solution, why extend the limited trial instead of making it universal?

It is a question about which the Royal Commission was silent.

And then there is super. The Productivity Commission’s earlier 722-page report on super (widely cited in the royal commission report) only twice makes explicit reference to issues faced by Aboriginal people.

This for a product where preservation age for a male is 60 years, yet the average life expectancy for an Indigenous male in the Northern Territory is 63.6[5].

While it raised the idea of a lower preservation age or releasing superannuation early for medical and associated expenses, the idea was relegated to the appendices.

Yet superannuation is a vital lifeline in remote communities. One Elder in the Northern Territory community of Wadeye made it clear to me that she uses access to super to get their children out of “town”, onto their country and away from social problems.

While the Productivity Commission does note the need to universalise access to hardship payments, it does not acknowledge that the capped amount of A$10,000 is taxed at up to 22%.

It’s an excellent idea – one that would have carried more weight had he made it a formal recommendation. 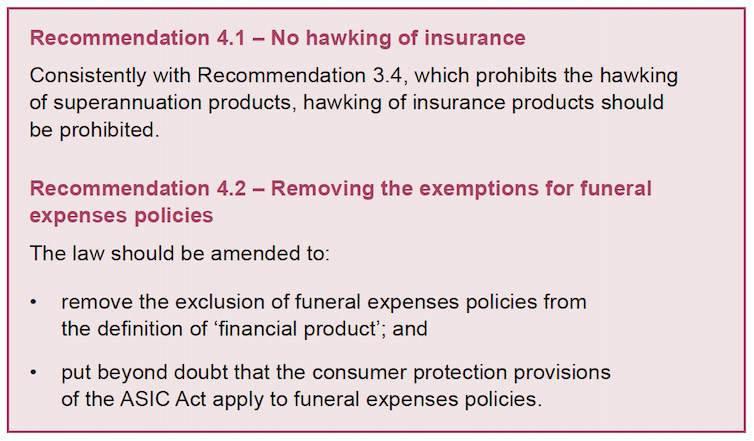 Final Report, Royal Commission into the Misconduct in the Banking, Superannuation and Financial Services Industry, Vol. 1.

There’s nothing wrong with these recommendations, but they only deal with a small portion of the range of financial abuses that take place in remote communities or when community members visit larger towns and cities.

Indeed, while I was conducting an interview with an Elder in Wurrumiyanga in the Tiwi Islands, the Elder asked about the text message he received while we were speaking. It was from a payday lender offering immediate access to funds.

Read more: Banking Royal Commission: no commissions, no exemptions, no fees without permission. Hayne gets the government to do a U-turn[8]

The Senate inquiry is examining some of these exploitative and predatory practices, but the royal commission’s terms of reference appeared to exclude consideration of them.

In the Northern Territory, where 25% of the population identifies as Aboriginal or Torres Strait Islander, they are not so easily excluded.

My research in the NT[9] suggests that financialisation[10] reinforces the systemic disadvantage introduced by white settlement and transmits it across generations.

Any effort to improve financial well-being in remote communities has to take into account the ways in which an imposed economic system has torn at the heart of the one it replaced.

Many of us seem unwilling to accept that an economic world existed prior to European settlement, that (international[11]) trade routes and agriculture[12] were sustained for millennia.

Working through this isn’t simple. It requires spending time with and listening to remote Indigenous communities. Yet as one Elder out past Timber Creek put it:

Government don’t ask, they just tell us. They don’t like to talk to Aboriginal people about what needs to happen, what needs to be done.

This brings us to recommendation 1.8: 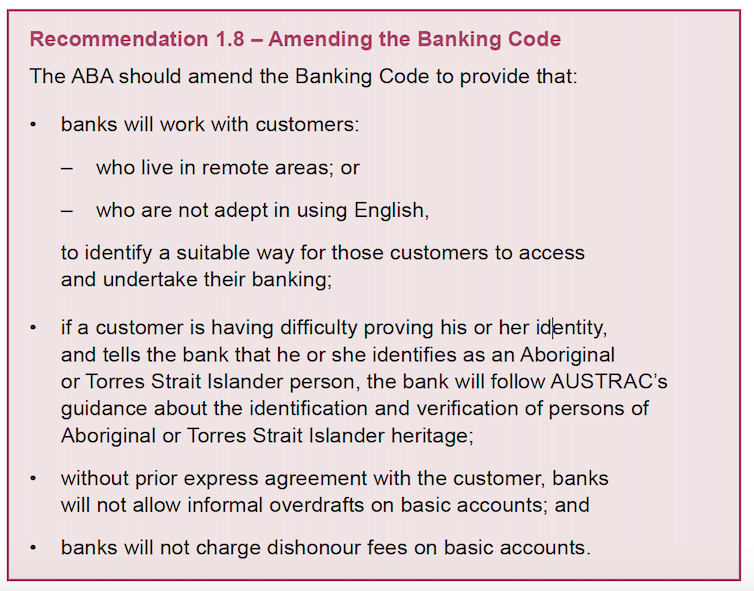 The need to “identify a suitable way for those customers to access and undertake their banking” is vague, but important.

It ought to mean having financial counsellors – who are Indigenous – trained in and able spending time on communities.

It will need commitment and ongoing funding from both industry and government.

But it’s more of a thought bubble than a worked-through proposal. At best, it’s a start.