The seat of World Bank president is becoming vacant[1]. Its president, Jim Yong Kim[2], will step down[3] on January 31, three years earlier than his term formally ends.

His move – described as “sudden[4]” and a “shock[5],” particularly since the World Bank has been going through significant internal restructuring[6] – gives US president Donald Trump the chance to appoint a replacement more aligned with his outlook.

This is because, since the World Bank’s establishment in 1945, the United States has had outsized influence[8] as its largest shareholder[9]. Its president has always been an American[10] citizen nominated by the US government. Kim was chosen by the Obama administration in 2012.

Rumours circulated early on that Trump was considering his daughter Ivanka[11] for the job. Even though that has since been denied, it’s likely he will choose a candidate sympathetic to his worldview.

This may mean a substantial change in the World Bank’s priorities. In particular, in two areas the bank has played an important and positive role: funding sustainable projects to deal with climate change (“climate resilience[12]”); and encouraging robust international connectivity through trade[13].

The World Bank has put substantial emphasis on funding projects in developing countries that address climate change. Last financial year 32% of its financing – a total of US$20.5 billion[14] – was climate-related.

Recently approved World Bank projects included climate resilient transport in the Oceania region (such as in Tonga[15] and Samoa[16]), and solar projects across Sub-Saharan Africa[17]. This is all part of a detailed five-year Climate Change Action Plan[18] underway since 2016.

This concern about the consequences of climate change stands in marked contrast to the Trump administration’s record[19].

Trump’s disregard of climate science is reflected in the defunding or reorganisation[20] of climate-related research projects and institutions. His appointee to head[21] the US Environmental Protection Agency, Scott Pruitt, played a key role in the US withdrawing from[22] the Paris Climate Agreement and energetically worked to gut pollution protection regulations[23].

So there’s good reason to believe the Trump administration’s pick for the World Bank will reflect its hostility to climate security, and that the bank’s priority towards funding climate resilience will change as a result. 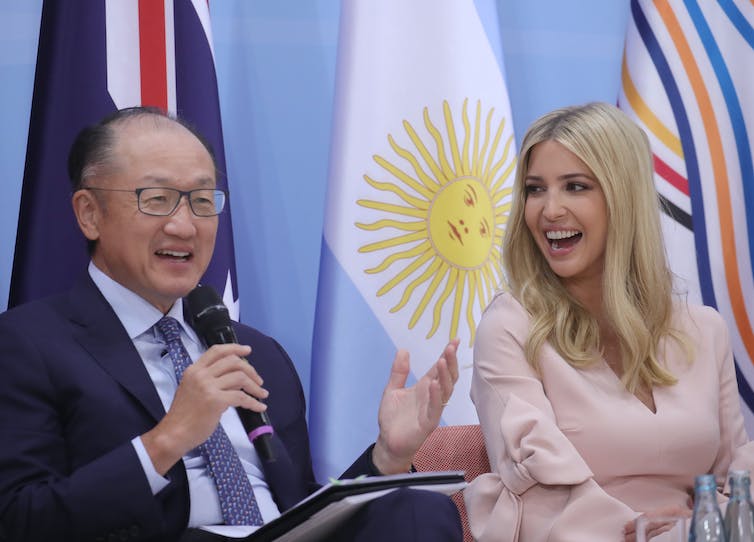 This is part of a wider “antipathy towards multilateralism[26]” that includes institutions such as the United Nations[27] and the World Trade Organisation[28].

Read more: Australia has to prepare for life after the World Trade Organisation[29]

Trump’s belief that free trade has hurt the US is at odds with the World Bank’s long history of facilitating reforms[30] designed to promote international trade.

Part of the original logic for the World Bank was that trade was seen as a means to create interdependence[31], and thus reduce economic conflict[32] that might lead to war.

The Trump administration has shown it is more than willing[33] to revert to an old-fashioned trade war.

Its tariff contest with China (which joined the WTO in 2001 with the World Bank’s help[34]) is already hurting global manufacturing[35], with the International Monetary Fund downgrading its global economic growth forecasts[36] as a result.

Though a Trump appointee might not upend the World Bank’s commitment to free trade in principle, the result might be an organisation less active in promoting multilateralism in practice.

Ironically a Trump-compliant World Bank might result in promoting its sidelining to the advantage of China.

China is planning through its Belt and Road Initiative[40] to spend US$1 trillion on international infrastructure projects over the coming decade. Much of these are focused on Eurasian[41] and African[42] regions where the World Bank has struggled most to promote sustainable prosperity.

China has also has built a rival to the World Bank in the form of the Asian Investment Infrastructure Bank[43] (AIIB), which has a sizeable balance sheet and a proactive approach to funding projects, including those in sustainable development[44].

Read more: US sparks new development race with China – but can it win?[45]

But in climate resilience and global economic integration, the World Bank still retains the mantle of global leader. Thus far it has welcomed cooperation with the AIIB, signing a memorandum of understanding in 2017[46].

Blunt its work in these two areas and the World Bank becomes more irrelevant. Combined with the organisation’s serious governance problems[47], which are most unlikely to be addressed by a Trump appointee, the future for the World Bank is not bright.