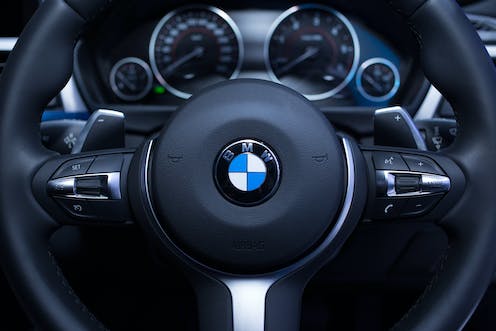 Having conquered the software market – where it gets its own acronym, SaaS (Software as a Service) – the subscription model is now moving into hardware.

Car makers are among the first cabs off the rank, using software to turn on and off optional extras.

German auto maker BMW is offering “in-car microtransactions[1]” to access options for car buyers in Britain, Korea, Germany, New Zealand and South Africa. A heated steering wheel, for example, has a monthly cost of NZ$20 in New Zealand, and £10 in the UK.

In the UK, seven of 13 “digital services” – from heated seats to automatic high beam and driving assistance – are now available in subscription form.

“Welcome to microtransaction hell” is how one headline[3] put it.

But that’s probably overselling the onset of a corporate dystopia where “you will own nothing”. BMW’s motives are pretty straightforward – as is most of what’s driving the subscription economy.

What is the subscription model?

The subscription model means paying a fee for periodical access to a service or product. Until a decade or so ago, it was largely confined to a few select industries, such as the delivery of milk, newspapers and magazines.

From milk and magazines, subscription services have proliferated with digital technology. Shutterstock

Other business models had similarities – such as rental businesses – but the point of the subscription model was different.

It was not about meeting a demand for a service someone only wanted to use temporarily or could not afford to own outright. It was about locking in a continuing relationship, to maximise “customer lifetime value”.

As Investopedia puts it[4], the subscription model’s focus is on customer retention over customer acquisition:

In essence, subscription business models focus on the way revenue is made so that a single customer pays multiple payments for prolonged access to a good or service instead of a large upfront one-time price.

This in large part explains why subscription services are now being adopted in markets outside their more obvious fit for things such as streaming news and entertainment.

In a broad sense, consumers can now be divided into two groups. One group comprises the “transactional shopper”, who interacts with the vendor once or twice, then disappears.

The other group comprises customers whose connection and “investment” in the brand is maintained through their subscriptions.

Consultant firm McKinsey has estimated the subscription e-commerce market is doubling in value[5] every year – though that was before the pandemic. It could be well be more now.

The market for subscription-based e-commerce delivery services has been doubling every year, according to consultant firm McKinsey. James Ross/AAP

The other part of the market is represented by BMW’s approach, offering extra features to customers that can only be accessed for a fee.

In some cases this may involve standard “upsell” techniques. For example, when you buy a new Peloton exercise bike you’ll be enticed with subscription offers[6], such as virtual classes and “customised” training programs, to “reach your goals”.

Or increasingly, as with BMW’s heated seats and steering wheels, it can be done with software turning actual bits of hardware on or off.

What is BMW’s game?

Is BMW’s purpose to gouge its customers for more money through getting them to pay an ongoing fee for something instead of owning it outright?

This is not what its subscription structure indicates. The opposite, in fact.

These prices represent a strong signal – that the cost of outright ownership is the most economical. It’s unlikely BMW expects anyone to sign up for the annual or three-yearly options. These are probably just to make the outright cost look more attractive.

Read more: The decoy effect: how you are influenced to choose without really knowing it[9]

The monthly offering, on the other hand, may lure owners to try out a feature they would otherwise have rejected buying outright at the time of purchase.

Indeed, car makers argue the reason they offer so many options as extras is because most owners don’t want them. So this mostly looks like BMW offering a “try before you buy” option.

That said, companies don’t need to have sinister motives for us to have concerns about the spread of the subscription model.

The more things we pay for with “micro-payments”, the harder it becomes to keep track of payments.

Many of us continue to pay for products and services we don’t use. A survey of 1,000 Australian adults in 2021, for example, found about a third wasted money on unused subscriptions or memberships – losing an average of about A$200 a year[10].

Deep psychological associations can influence these decisions. Experiments by US marketing professors Jennifer Savary and Ravi Dhar suggests people with lower “self-concept[11]” are less likely to sign up for subscriptions – but also less likely to cancel subscriptions they are not using.

Read more: What makes us sign up to subscription boxes[12]

We may see the subscription model increasingly used in other sectors – including the health and justice systems.

For example, a subscription payment may provide a better level of nutritious food for a resident in an aged care facility, or a hospital or even a prison. This is not dissimilar to the way private health insurance premiums are managed, but still presents important justice and equity concerns.

So while there’s no reason to exaggerate the dangers of the subscription economy, it’s also prudent for consumers, advocacy groups and governments to ask “What next?”.