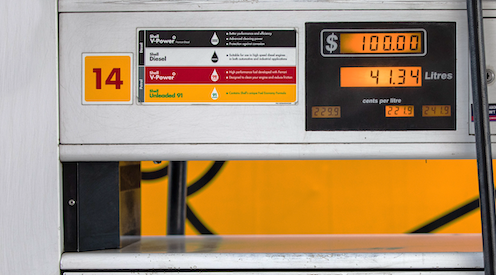 One government, in New Zealand[1], has already cut its fuel excise, by 25 cents per litre for the three months it hopes will be the worst of the oil price crisis, and in the United States[2] and Australia[3] there’s talk of the same sort of thing.

Before considering whether it should be cut, temporally waived, or removed in this month’s budget, it’s worth reacquainting ourselves with what it is.

As is the case with the goods and services tax, it isn’t explicitly quoted when we buy petrol or other fuels; it is rolled into the advertised price.

At the moment the excise on standard unleaded petrol is 43.3 cents per litre[4], an impost which itself is subject to the goods and services tax. This brings the total to 47.6 cents per litre, something that would have been significant a year ago when the price of petrol was lower, accounting for one third of the price.

It is now less important, accounting for 22% of the price of petrol.

Since then, it has generally been available for any sort of spending – although the impression remains that it is a crude form of user fee for roads and associated government-funded infrastructure, and for maintenance of that infrastructure.

The excise is collected at the points of distribution from local refineries and importers rather than at the petrol pump, making it easy to administer.

Making it much more difficult to administer are the substantial rebates[7] offered to off-road users of petrol and diesel, which have the effect of making it a charge for using roads. They cut the total takings from about A$20 billion[8] to A$11 billion[9].

Read more: It's hard to find a case for a cut in petrol tax – there are other things the budget can do[11]

These taxes also go into general revenue, and with no specific link to state government decisions on road infrastructure and maintenance or the provision of services such as traffic police and hospitals.

Taken together, the Commonwealth’s takings from fuel excise and the states’ takings from special motor vehicle taxes appear to roughly equal[12] their spending on roads and associated infrastructure and fall short of the total costs imposed by road users on others including the costs of noise, pollution and policing.

There are better ways to do it

In an ideal world we would charge explicitly for road use, pollution and congestion in the cities during peak hours.

Fuel excise is an increasingly inappropriate way of charging for road use because more and more cars (including hybrids) are using less fuel per kilometre, and some (including all-electric vehicles) are using none.

Some states, including Victoria, charge electric vehicles per kilometre travelled. Owners are required to provide a photo of their odometer and the fee is added to the cost of their registration[13].

While in the spirit of user charging, what Victoria and other states are doing is a limited first step.

Ideally, and subject to considerations of simplicity and operating costs, the user charge would vary by weight per axle, aggregate weight and distance travelled, and perhaps by road type. Given the fixed cost of much road investment and maintenance, a modified version of current annual registration fees should continue. The combustion of petrol and diesel generates external pollution costs not considered by businesses and individuals in their use of motor vehicles. Read more: High petrol prices hurt, but cutting excise would harm energy security[14] External pollution costs include particulates with adverse effects on health and smog, and emissions of carbon dioxide that contribute to climate change. A pollution fee that is much smaller than the current 43.3 cents per litre excise should be imposed on fuel used for both off-road and on-road purposes as part of a comprehensive price on greenhouse gas emissions associated with the combustion of fossil fuels. Congestion causes costs estimated to be in the tens of billions in terms of lost time, uncertainty, and extra fuel use, with only a small portion borne by the road user concerned. An important part of the reform package should be a congestion charge for peak hours along the lines suggested by the Grattan Institute[15]. This ideal set of changes would be imposed independent of the price of oil. References^ New Zealand (www.beehive.govt.nz)^ United States (www.businessinsider.com.au)^ Australia (www.smh.com.au)^ 43.3 cents per litre (www.ato.gov.au)^ Constitution (www.aph.gov.au)^ earmarked (www.aph.gov.au)^ rebates (www.ato.gov.au)^ A$20 billion (budget.gov.au)^ A$11 billion (budget.gov.au)^ A$11.3 billion (www.abs.gov.au)^ It's hard to find a case for a cut in petrol tax – there are other things the budget can do (theconversation.com)^ roughly equal (www.pc.gov.au)^ cost of their registration (www.vicroads.vic.gov.au)^ High petrol prices hurt, but cutting excise would harm energy security (theconversation.com)^ Grattan Institute (grattan.edu.au)Authors: John Freebairn, Professor, Department of Economics, The University of Melbourne