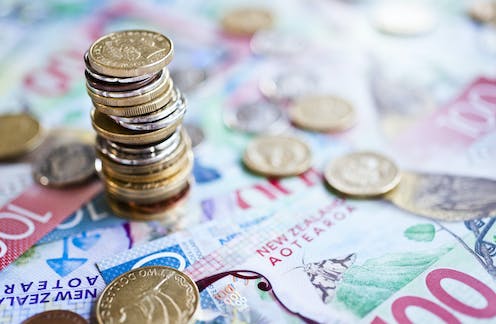 Tax has again become an election issue[1], more than 12 months before voters go to the polls. Part of the current debate centres around tax brackets and whether the current cut-off points are fair[2].

“Fiscal drag”, sometimes known as “bracket creep[4]”, occurs when an increase in a taxpayer’s income takes their highest slice of income into a higher tax bracket without an increase in real income. This often happens when wages rise to compensate for inflation but tax bands are not adjusted.

The return of inflation

Addressing fiscal drag was an important policy focus in the last decades of the 20th century[5] as countries tried to manage persistent inflation. But since 2000, most economically developed countries have experienced no or low inflation, putting fiscal drag on the back burner.

The COVID pandemic, however, led to supply chain interruptions and labour shortages. As a consequence, many countries are experiencing rates of inflation not seen for decades.

Arguments for linking income tax brackets to rising costs of living, also known as index linking, didn’t disappear in the era of low or no inflation[6] but have recently been revived, including by the National Party[7].

While fiscal drag could be considered tax increase by stealth, when the Tax Working Group[8] delivered its final report in 2019 the authors noted that “whether fiscal drag is of sufficient concern is a value judgement”.

Years of low inflation have meant governments have not had to address fiscal drag. Getty Images[9]

While the decision to address fiscal drag may be a value judgement, it’s worth understanding what it is and why successive governments have not fixed what intuitively appears to be an unfairness in the tax system.

Governments have long relied on inflation to reduce the real value of government debt. This allows them to take advantage of fiscal drag in times of economic rebuilding – notably when debt is high in comparison with gross domestic product, as they are now in many countries (though not currently in New Zealand[10]).

However, if a government considers fiscal drag to be of sufficient concern, the most direct ways of overcoming the problem are to have a flat rate of income tax or to link tax brackets to an inflation measure, such as a consumer price index.

Read more: Inflation is 2022’s boogeyman. How can we address rising living costs, while helping bring it down?[11]

A flat rate of income tax would skew the overall tax system away from the usual expectation of ability to pay, with the wealthy benefiting the most. But index linking is, in effect, a tax cut that reduces a government’s capacity to provide public services.

The National-led government of John Key considered changing tax bands but recognised this would affect the funding of public services. In effect, they opted for fiscal drag[12]. At the same time, Key’s government increased the rate of GST. If consumers keep spending during periods of rising inflation, the government’s GST take will also increase.

Current revenue minister David Parker has a different approach. He opposes readjustment of tax brackets in favour of identifying untaxed income[13], although it’s not obvious these are mutually exclusive.

Focusing on the middle

Different taxpayers are affected differently by tax increases, including fiscal drag[14]. While many people will focus on their marginal tax rate – the tax rate paid on every extra dollar they earn – the focus should lie with average tax paid.

Compare this with Bella who earns an income of $65,000 – placing her under the upper limit of $70,000 for the 30% tax bracket. Her marginal rate is also 30% but her average rate is 20.76%. So, crossing a bracket threshold and having more of your income taxed in a higher band increases your average tax rate. Fiscal drag affects both.

Employees have little scope for reducing their taxable income and so may be affected more than some other earners. Research into tax bunching around so-called “kink points”[16] (income levels just below a higher tax rate) indicates that non-employees – business people and contractors – are able to manipulate their incomes to ensure they fall below a higher tax bracket.

A tradie, for example, may inflate their expenses. A company director may retain funds within the company which is taxed at a flat rate of 28%.

From a policy perspective, therefore, it’s important to understand who is most affected by fiscal drag. Such an understanding might lead to increases in lower tax bands but not higher ones.

Why do many employees not seem to care about fiscal drag? Perhaps it’s because, psychologically, it doesn’t feel the same as an overt tax increase. Even if the real value of your pay decreases, the amount you take home is stable.

Conversely, index linking may not feel like a tax cut. People understand that prices are rising but they may not necessarily link inflation to their tax levels.

We may hope for full transparency on the part of government, but some obscurity is inherent in the tax system. As Louis XIV’s finance minister Jean-Baptiste Colbert once observed[17], “the art of taxation consists in so plucking the goose as to obtain the largest possible amount of feathers with the smallest possible amount of hissing.”