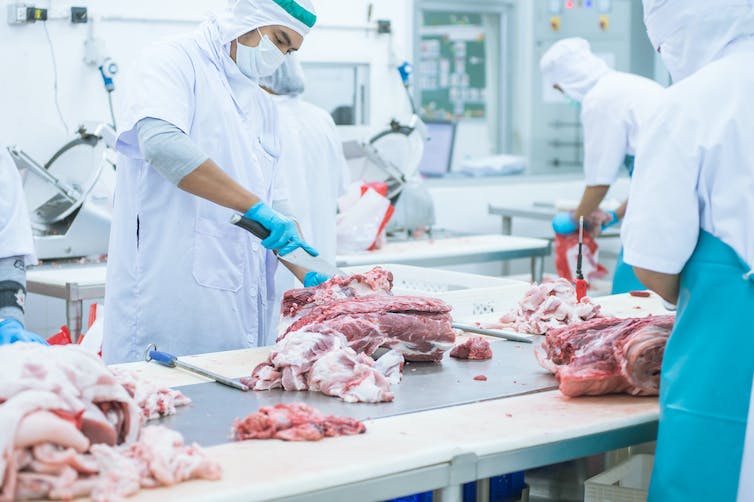 Most off the menu are chicken dishes. Australia’s biggest poultry processor Ingham’s (with a 40% market share[2]) has had to stop producing some items and curtail production of others. It’s affecting clients such as KFC[3], and supermarket meat shelves are largely bare. The Australian Chicken Meat Federation said last week breast fillets, drumsticks and chicken wings will be hard to find for at least several weeks.

The response of employers and government has been to relax health protocols for meat workers, reducing isolation times and keeping them on the line if they have been in contact with someone infected with COVID-19, or indeed even if they have the virus themselves.

Teys Australia told COVID-positive staff at its Naracoorte beef abattoir in South Australia on January 9 they were required to work “as normal unless you are feeling unwell[4]”.

The Australian Meat Industry Employees Union warned this would see all 400 workers[5] at the site infected. Woolworths, concerned about the bad look, suspended supplies from the abattoir (which resumed last week[6]).

This crisis in the industry was entirely predictable. Employers and the government should have seen it coming. Now, having failed to pursue reforms that could have helped mitigate it, they are grasping at quick fixes that compound the underlying problem.

It’s as if nothing has been learned from the outbreaks of COVID-19 in meat-processing facilities in Australia and elsewhere since 2020.

In 2020, meat-processing facilities ranked alongside cruise ships and health-care facilities as hotspots for COVID-19 transmission in Australia. Abattoirs were the major initial source of infections for the June infection wave in Melbourne that led to Victoria’s 112-day lockdown[8].

Things were the same elsewhere. In the US, researchers have estimated[9] meat-processing plants were associated with 6-8% of COVID-19 cases and 3-4% of deaths from early 2020 to July 2021. This is a highly disproportionate number given the industry employs less than 0.15% of the US population.

In that time, according to an analysis published by Reuters this month[10], 90% of the plants owned by the five biggest meat-processing companies had COVID-19 cases.

The experience in other countries reflects this to a greater or lesser degree – with infection outbreaks in Brazil[11], Canada[12], France[13], Germany and Spain[14].

The low temperatures and low humidity[16] of food-processing facilities increase viral transmission, while the poor air quality increases the prevalence of respiratory disorders, which means workers are more susceptible to illness if infected. The rate of asthmatic symptoms among chicken-processing workers, for example, has been estimated as being four times[17] that of all adults.

These risks are heightened by working in close proximity to others on production lines where the work is physically demanding and the pace hectic.

The low temperature and low humidity of abattoirs increase the risk of viral transmission. Shutterstock

The poor working conditions are exacerbated by the prevalence of labour-hire practices that make it difficult for workers to stand up for their rights.

Few workers are employed as permanent employees. Statistics from a 2015 report[19] by the Australian Meat Processor Corporation put the percentage of the workforce on casual contracts at 20%, with no sick leave benefits and the ability to be sacked “on any given day part-way through a shift”. The rest were “daily hires”, able to be sacked with a day’s notice.

Submissions to the Senate’s select committee inquiry into job security[21] suggest industry employment practices have not improved since then.

The submission from the Australasian Meat Industry Employees Union argues Australian processors have sought to replicate the industry in North America in using a migrant workforce to undermine wages and conditions, on the basis non-English-speaking migrants are vulnerable to exploitation, and to manipulation and intimidation over visa status concerns.

Putting meat workers in greater jeopardy should not have been the solution to the poor working conditions and practices that have made meat-processing facilities high-risk vectors for COVID-19 transmission.

These conditions were well-documented and understood. This current crisis should have been foreseeable, even allowing for the Omicron variant.

Other major meat-producing countries have taken structural legal reforms and collaborative initiatives to address these risks.

In Denmark[22], sub-contractors and casual workers are paid the same wages as directly employed staff, and meat plant workers receive up to five weeks paid holidays a year.

In 2020, Germany banned[23] the subcontracting of workers for core businesses in the meat processing industry in 2020.

It’s not too late for Australia to follow these examples and make meaningful reforms that can reduce the likelihood of this mistake being repeated, by ensuring better working conditions across the meat industry.