This week we’re exploring the state of nine different policy areas across Australia’s states, as detailed in Grattan Institute’s State Orange Book 2018. Read the other articles in the series here[1].

You might think that being a state (or territory) treasurer is a boring job. The federal treasurer gets all the media attention and controls many of the big economic levers, including income and company tax, massive Australia-wide spending and trade and competition policy.

But you would be wrong.

Grattan Institute’s State Orange Book 2018[2] shows that if state treasurers relied less on taxes that hurt the economy and more on the ones that are the very best they could provide a huge boost to their economies.

Almost every tax hurts economic growth, but some hurt more than others.

Our state treasurers know this, yet they continue to make poor choices.

Taxes on transactions, such as stamp duties on real estate purchases, are particularly inefficient.

Read more: To make housing more affordable this is what state governments need to do[3]

With the typical stamp duty bill now above A$40,000 in Sydney and Melbourne, this is more than just an idle theory.

In contrast, taxes on land are extraordinarily efficient[4], and council rates equally so.

ACT is showing the way

The Australian Capital Territory has Australia’s most efficient tax base – every dollar of revenue raised costs the economy just 21.9 cents.

New South Wales has the least efficient – every dollar of revenue raised costs the economy 29.7 cents. 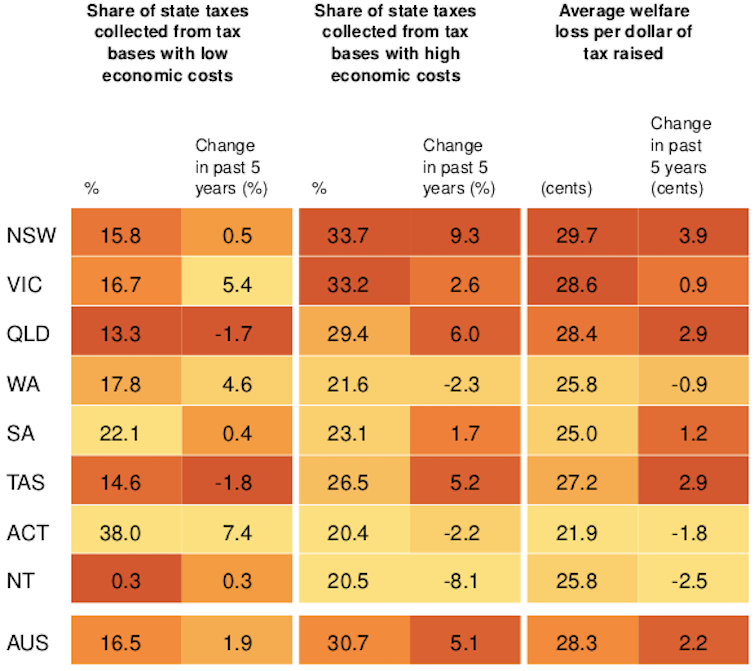 Grattan Institute Orange Book 2018[5] While most states are going backwards Unfortunately, in most states taxes have became less efficient over the past five years. Booming property prices in Sydney and Melbourne inflated stamp duties, giving them a growing share of the tax base in NSW and Victoria. 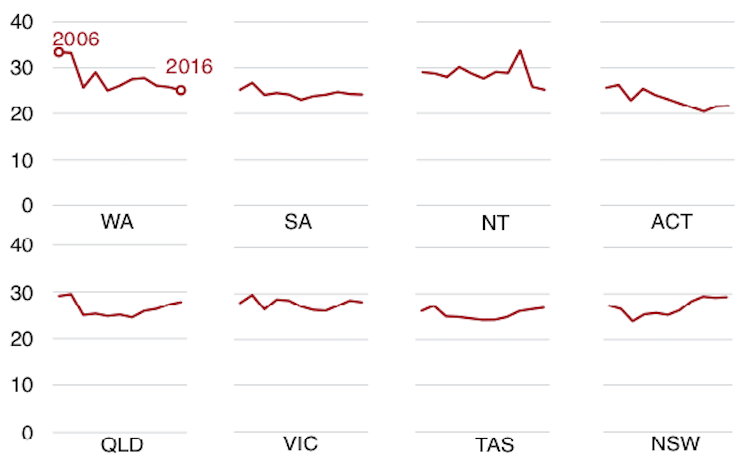 Average excess burden of taxation cents per dollar of tax revenue collected in each state and territory (2006-2016) Grattan Institute Orange book 2008[6] They should copy the ACT All state treasurers should follow the lead[7] of the ACT and replace stamp duties with broad-based property taxes. Our calculations suggest that doing so could make Australians up to $17 billion a year better off, while also making housing more affordable[8]. And stamp duties are unfair. They make some families pay more tax than others simply because they move home more often. Read more: Infrastructure splurge ignores smarter ways to keep growing cities moving[9] An annual flat tax set at between A$5 and A$7[10] for every A$1,000 of unimproved land value would be enough to fund the abolition of property stamp duties. Which won’t be easy Proposals to make the switch have stalled because the politics is hard[11]. Recent purchasers would be reluctant to pay an annual tax so soon after paying stamp duty. A property tax would pose difficulties for people who are asset-rich but income-poor, especially retirees. And property taxes cause angst: quarterly property tax bills remind people that they are taxpayers more often than does a one-off stamp duty with each purchase. So state treasurers should make the switch gradually, as in the ACT[12]: slowly wind back stamp duty and ramp up broad-based property tax over time. Read more: Australia's dangerous fantasy: diverting population growth to the regions[13] It would provide the states with an increasingly stable revenue stream while reducing the disparity between those who bought a home just before the change and just afterwards. To ensure that asset-rich but income-poor households could stay in their homes, state treasurers would have to allow them to defer paying the levy (with interest) until they sell their properties. And they should axe insurance tax State treasurers should also replace state taxes on property, life, health and motor vehicle insurance with a broad-based property levy. Most states have already abolished insurance levies to fund fire and emergency services. Insurance taxes deter[14] people and businesses from buying adequate insurance, leaving them exposed to risks[15] such as flood or fire damage to their home, or motor vehicle theft. And charge for rezoning And state treasurers should follow another ACT lead[16] and introduce explicit “betterment taxes” to capture some of the windfall gains from rezoning of land. Government permission to build higher-density housing, or convert farmland into greenfield housing land, generates large unearned windfall gains for landowners. Taxing these windfall gains would be a particularly efficient form of taxation, would reduce the opportunities for corruption[17] in the planning system, and would enable state treasurers to reduce other more economically harmful and regressive taxes. And apply payroll tax widely Finally, state payroll taxes should be broadened by abolishing carve-outs for small businesses. This would enable state treasurers to cut payroll tax rates across the board. Generous thresholds and exemptions have weakened states’ payroll tax bases and increased[18] the economic costs of the tax. Read more: Grattan Institute Orange Book 2018. State governments matter, vote wisely[19] Astoundingly, around 90% of NSW businesses are exempt[20] from payroll tax. We believe that, taken together, this set of reforms would make a big difference to economic growth. Voters might even reward the treasurers and their premiers.