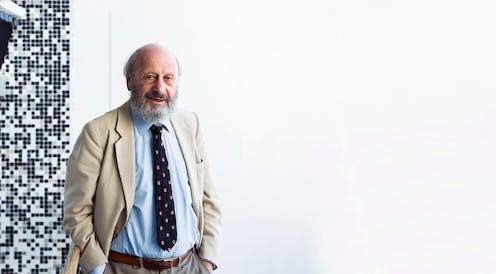 Australian economics has lost one of its most internationally renowned scholars with the passing of Geoffrey Harcourt AC[1] at the age of 90. He was also one of its most prolific.

eminent service to higher education as an academic economist and author, particularly in the fields of post-Keynesian economics, capital theory and economic thought.

He was a distinguished fellow of the Economic Society of Australia in 1996 among numerous other honours.

An historian of ideas

Geoff gained his first class honours degree at the University of Melbourne. It was there he made a life-long commitment to work toward alleviating poverty and against social and racial discrimination.

As he later wrote[2], “I became an economist because I hated injustice, unemployment and poverty”.

He then moved to Cambridge where he got his PhD. He was supervised by economics greats Nicky Kaldor[3] and Ronald Henderson[4]. He taught for many years at the University of Adelaide.

He was not just an ivory tower academic. He worked with some colleagues on the very practical 1974 “Adelaide Plan”, which proposed disallowing tax deductions for wage increases above a certain level as a means of reining rampant inflation.

Read more: Geoff Harcourt: Why treasurers should go back to economics school[5]

Another part of the plan was trading off wage increases for personal income tax cuts. It was not adopted, but later found an echo in the prices-wages accords[6] of the Hawke government.

He declined an offer by Jim Cairns[7], briefly treasurer in the Whitlam government, to be appointed Governor of the Reserve Bank.

Geoff Harcourt with students in the 1970s. Family[8]

When Whitlam was dismissed, Geoff’s son (the economist Tim Harcourt[9]) recalled his father speaking at a protest rally just as he had at anti-Vietnam war rallies a few years earlier.

In 1979, during the term of the Fraser Coalition government, he drafted an economic policy programme for a future Labor government. He later joked that Hawke followed it for “at least a good half-hour”.

He was president of Jesus College[10] for most of the period 1988 to 1992. He was on the University Council for eight years.

Some of his best-known work revolved around Cambridge. He wrote on the “Cambridge controversies[12]”. This refers to an argument about the nature of capital between economists from the University of Cambridge and the Massachusetts Institute of Technology.

He co-wrote the definitive intellectual biography of famous Cambridge economist Joan Robinson[13]. (Geoff, like many others, thought she should have been the first woman to win the Economics Nobel Prize.)

Geoff described himself as an “all-rounder” with a range of research interests. He is probably best remembered for his work on what is now termed “post-Keynesian economics[14]”.

Both authors of this hastily-written obituary remember Geoff with great affection.

Harry Bloch, the incoming co-editor of History of Economics Review[15], remembered Geoff as “the beating heart of the history of economic thought in Australia”.

The review will feature a tribute to Geoff in due course.