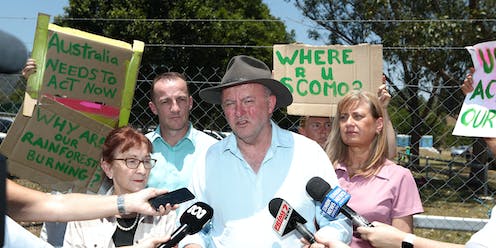 The Australian Labor Party is set to announce its target for cutting greenhouse gas emissions today.

But it lost those elections. So up to now Labor has refused to say what policies it will take to the 2022 election. We should know by the end of the day.

The Coalition’s position is clear – sort of.

But Prime Minister Scott Morrison is having a bet each way, by also saying the government will do better. As he said on November 15[3]:

This leaves Labor, which has consistently taken a stronger stance than the Coalition, with three broad options.

Option 1 is to match the 35% reduction but make it a formal target, not a prediction.

Option 2 is to go a little higher with a prediction – say 40% – and claim this is achievable given announced Labor policies such as electric vehicles and upgrading the electricity grid (“rewiring the nation”).

Option 3 is set a more ambitious target – perhaps 45%, as Labor did at the last election, along with a change to the so-called “safeguard mechanism” introduced by the Coalition[4] in 2016 as part of its alternative to a price on carbon.

At the 2019 election Labor proposed to cut the eligibility threshold for the cap from 100,000 to 25,000 tonnes of carbon dioxide a year, and extend it to more emitters.

The difference between now and 2019 is that this time the business community is behind the approach.

In fact, the Business Council of Australia’s climate plan[6], published in October 2021, is to do exactly this.

Business Council of Australia[7] Pitfalls abound Each one of these options have pitfalls. Option 1 looks weak, and gives the government a free pass on climate. It’s hard for Labor politicians to campaign on the government not doing enough if they aren’t willing to do more themselves. Option 2 (perhaps the most likely) is a hedge: Labor will do more because it cares about the planet, but not too much more because, you know, politics. Option 3 is the bravest of the likely targets. It’s a bigger number that would make for more meaningful change. It also now has air cover from the Business Council of Australia. But it’s also the option taken to the last election, which Labor lost. Maybe that was due to other reasons, such as the retiree tax, but it still seems politically risky. No talk about a carbon price One option you can bet Labor will not adopt is a price on carbon. That’s the best way to balance what’s good about emissions (economic growth and development) with what’s bad about emissions (climate change). This has been off the table with Labor since it lost government in 2013 – in no small part due to Tony Abbott exploiting the issue with his “great big tax” campaigning.

Future prime minister Tony Abbott campaigning in September 2012 against a carbon price, which the Coalition claimed would ‘drive up the price of everything’. But a funny thing has happened on the way to the 2022 election. A few months ago the Coalition inserted a price on carbon into its own plan. As The Conversation’s Peter Martin[8] put it, the plan assumed emissions reductions “the same as what would be expected if Australians faced a carbon price (or tax) that climbed to A$24 per tonne of carbon dioxide equivalent by 2050”. If Energy Minister Angus Taylor is trying to hide this, he is not being particularly stealthy about it. Read more: How government modelling found net-zero would leave us better off[9] Page 6 of the government document[10] outlining the modelling and analysis behind the plan acknowledges it models voluntary emissions reductions “as an abatement incentive which is taken up across the economy and rises to $24/t CO2-e in 2050”. It says behaving “as if[11]” there was a carbon price of A$24 per tonne in place would get emissions down by 85%. To get them down further to net zero would require an even higher carbon price[12]: about A$80 per tonne on the model’s logic. Labor could take its cue from the Coalition So why doesn’t Labor do what it knows to be right – announce a price on carbon? It could say it will start at the government’s own figure of $24/tonne, and take any needed subsequent increases to future elections. That won’t happen on Friday. Or any time soon. We should reflect on why. References^ 2016 (www.theguardian.com)^ 2019 (theconversation.com)^ November 15 (www.pm.gov.au)^ introduced by the Coalition (www.aph.gov.au)^ ​The government's net-zero modelling shows winners, we've found losers (theconversation.com)^ climate plan (www.bca.com.au)^ Business Council of Australia (www.bca.com.au)^ Peter Martin (theconversation.com)^ How government modelling found net-zero would leave us better off (theconversation.com)^ government document (www.industry.gov.au)^ as if (www.industry.gov.au)^ an even higher carbon price (www.afr.com)Authors: Richard Holden, Professor of Economics, UNSW