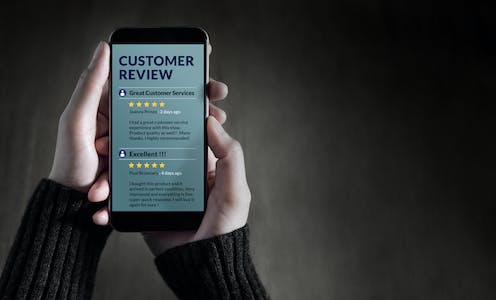 Whether you are booking a hotel room, choosing a restaurant, deciding on what movie to see or buying any number of things, it is likely you have read online reviews before making your decision.

What makes a consumer review persuasive, though? No matter how short, it tells a story in much the same way as a novel does. Yet, like a journalism report, it starts with its takeaway rather than saving that to the end.

These are among the key findings of research my colleagues and I have done into what gives consumer reviews their power to influence consumer choices.

In view of the influence reviews have, there is considerable interest among marketers, social media influencers and software developers in knowing the qualities that make them compelling and persuasive. So it’s smart for you as a consumer to understand them too.

In a recent article[2] in the Journal of Consumer Research, my colleagues Jennifer Escalas, Stephan Ludwig, Ellis van den Hende and I argue that persuasiveness lies in the experience of “transportation”. The level of this transportation depends on the degree and power of narrative offered.

Our theory was that the same elements that grip the reader of a novel might also exist in reviews, because reviews are essentially short stories too. To test that theory, we developed a new computerised technique for measuring a text’s degree of “narrativity”. We then conducted three studies.

Showing who, where, and when

In the first, we analysed almost 200,000 reviews from the “things to do in Las Vegas” category on the travel-related review site TripAdvisor. Our computerised technique showed the relationship between combinations of words used and the helpfulness of reviews, as measured by reader ratings.

We found the more a review offered insight into the writer’s state of mind, the greater its helpfulness. Take, for example, this extract from a review of Kà, a circus show in Las Vegas:

There was a lot of action. That I love in this show. I would totally go see it again.

Conveying a sense of place and a sequence of events were also elements that contributed to greater helpfulness. For example, this is a review of the musical Vegas! The Show:

The first half seemed to drag on until the bird trainer and his buddies came on. Because they were hilarious and their performance seemed to add life to the show and energise the crowd. The second half of the show was a lot of fun!

We also used our computerised technique to tally how many positive and negative words each review contained and where they featured. This analysis tested the effect of the emotional thread in the stories.

Reviews that exhibited emotional curves in their story line, moving from positive to negative and back for example, were rated as more helpful than those that provided a linear narrative. An example is the following review of Mystery Adventures, a live action role-playing game organised in Las Vegas:

This is definitely an unusual thing to do in Las Vegas, but can be a wonderful change of pace. Max seemed nervous at first with lots of ‘uhhh’s and ummmms, but warmed up quickly. Very exciting and worth the effort we put into it.

As mentioned above, reviews starting with their takeaway, or most dramatic revelation, tended to be more helpful too. The following opening of a Graceland Wedding Chapel review is an example:

I was so upset, I did not get married at Graceland Chapel! On our wedding night, there we were….

In the second study, panellists on Amazon Mechanical Turk, a crowdsourcing platform, were asked to rate the transportation and helpfulness of a selection of reviews. In the third study, we asked 156 students to read reviews about a trip to Agra, India. As before, the participants were asked to rate how transporting and helpful the reviews were, as well as how much they wanted to travel to Agra after reading them.

We confirmed in those two studies that the more narrative elements were present, the more the reviews were regarded as captivating and persuasive. We concluded that the most persuasive reviews tell who did what, where, when and why, and have their emotional transitions and climaxes at the beginning.

Read more: How to split the good from the bad in online reviews and ratings[3]

Our results show that what story is being told as well as how it is being transferred affect you. If you are aware of this influence, you can make more conscious choices.

When reading online reviews, you should consider what the reviewers’ state of mind was, where and when their experience took place, how emotions flow across the review, and where the climax is. In that way, you consider who is writing the texts and what their helpfulness really is.

Reading critically is a practice we should all adopt, no matter the publication. Narrative qualities are among the hardest ones to fake – so looking out for them minimises the chance that fake reviews sway your opinion.

Read more: From dating profiles to Brexit – how to spot an online lie[4]