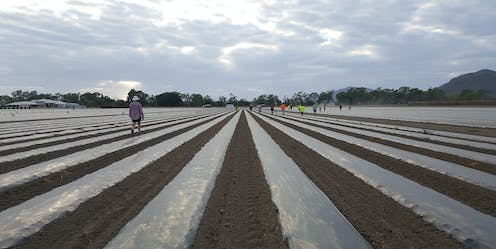 I met Elisabeth the day she learned she was being sent back to Vanuatu.

She had arrived in Shepparton, in north-central Victoria, two months earlier. She was meant to stay for six months, working in a packing shed as part of the Seasonal Worker Programme, which provides temporary visas to workers from nine Pacific Island countries and Timor-Leste (East Timor).

But her employer had decided she wasn’t productive enough. So Elisabeth’s contract had been cancelled. She had hoped to save a few thousand dollars from her time in Australia, enough to buy a small plot of land on which to build a house and transform her family’s life. Instead she was taking back a plastic shopping bag with chocolate Easter eggs she had bought that afternoon at the supermarket in a nearby town.

Read more: If Australia cares about Pacific nations, we should also invest in their care givers[1]

More that 80% of workers in Australia’s horticultural industry industry are migrants on temporary work visas (or undocumented). The Seasonal Worker Programme is often regarded as one of the better pathways to this work.

It is, for example, more highly regulated than the larger (pre-pandemic) Working Holiday Maker scheme, which provides the industry with backpackers. In 2020-21 it provided about 12,000 of the roughly 80,000 strong (formally employed) seasonal workforce.

But the regulations are a double-edged sword, also working as mechanisms of control[2].

CC BY[3] Unlike the Working Holiday Maker scheme, Seasonal Worker Programme visas are typically arranged by labour-hire companies, who recruit and then place workers on client farms. Under the condition of the visa, workers can only work for that employer. Employers in turn are obliged to provide things like accommodation. But this can be become an opportunity to exploitation, through overcharging workers for rent[4]. If the employer is dissatisfied with a worker, as in Elisabeth’s case, they can be sent home, or refused a place in subsequent years. But if the worker is dissatisfied with the employer, it’s even worse. Tying workers to their employers stymies their capacity to act in the face of poor conditions. Backpackers who find themselves being underpaid[5] or exploited at least have the option of leaving. Those in the Seasonal Worker Programme can’t do the same. Campaign against ‘absconding’ This is the context for the federal government’s concerns about seasonal workers “absconding” – a word more typically associated with escaping from custody. Government figures provided to media outlets suggest 1,181 workers absconded[6] in the past financial year, up on 225 the year before. A campaign warning visa holders not to leave their designated employer and seek work elsewhere warns of consequences including visa cancellation; not being allowed to work in Australia again (“this may include your family and community members”), and bringing “shame to your family’s reputation”.

Shame: the Australian Government’s response to Pacific Islanders breaching the condition of their Seasonal Worker Programme visa. Australian Government It’s a characteristically patronising and insulting message that ignores – and abdicates responsibility for – the conditions that drive SWP workers to abscond. During the pandemic, vulnerabilities[7] for workers have intensified. The experience of Anne, another worker from Vanuatu, is illustrative. When COVID-19 hit in March 2020, Anne was working in a fruit-packing shed in regional Victoria. This was her sixth placement. She had been due to go back to Vanuatu in July, but had her visa extended under special COVID-19 provisions. This was not lucrative for her, though. When I spoke to her in October last year she working on a farm in NSW. Her labour-hire agency had placed her there (with no input from her). Crossing the state border, she spent two weeks in quarantine, during which time she had to cover her living costs, eating into the savings she was hoped to take back to her family. Isolated and missing her children, she felt desperate about how little money she had been able to save. Shifting responsiblity There are indeed, as the government campaign states, unscrupulous labour contractors spreading misinformation and encouraging people to abscond, particularly under these pandemic circumstances. But this is not the case of a few bad apples. It is the very conditions of horticultural labour that produce vulnerability and insecurity, and drive absconding. Nor are Pacific workers who do abscond dupes; they are people navigating circumstances that often leave them with no good choices. The government’s campaign obscures these things. It instead places responsibility on Pacific workers themselves. This moralising and patronising discourse is consistent with an established pattern of Australian engagement with the Pacific. Think, for example, of then Deputy Prime Minister Michael McCormack’s 2019 dismissal of Pacific Island nation’s concerns about climate change. “They’ll continue to survive,” he said[8], “because many of their workers come here and pick our fruit.” Meaningful reforms Undocumented workers provide as much as one-third[9] of Australia’s national seasonal horticultural workforce. A visa amnesty – something advocates have long called for and a handful of federal National Party MPs have already endorsed[10] – would support and protect these communities. Beyond this, the Fair Work Commission’s decision last week to guarantee farm workers a minimum wage[11] is a good step in improving working conditions. But there’s more to be done. Read more: Closing the loophole: a minimum wage for Australia's farm workers is long overdue[12] All workers on seasonal visas need a right to return in subsequent seasons. This would enable them to complain about mistreatment with less fear of being punished. They also deserve to make their own choices about accommodation and other living conditions. There needs to be capacity to move between employers, and meaningful consequences to hold labour-hire contractors to account for mistreatment. There should also be pathways to permanent residency, as there are for other temporary migration visas. Migrant workers are critical to Australia’s farming sector and food security. What is shameful are the conditions leading so many to abscond. References^ If Australia cares about Pacific nations, we should also invest in their care givers (theconversation.com)^ mechanisms of control (rai.onlinelibrary.wiley.com)^ CC BY (creativecommons.org)^ overcharging workers for rent (www.theaustralian.com.au)^ underpaid (mckellinstitute.org.au)^ 1,181 workers absconded (www.theguardian.com)^ vulnerabilities (unitedworkers.org.au)^ he said (www.theguardian.com)^ one-third (www.sydney.edu.au)^ have already endorsed (www.smh.com.au)^ minimum wage (theconversation.com)^ Closing the loophole: a minimum wage for Australia's farm workers is long overdue (theconversation.com)Authors: Victoria Stead, Senior Research Fellow, Alfred Deakin Institute for Citizenship and Globalisation, Deakin University