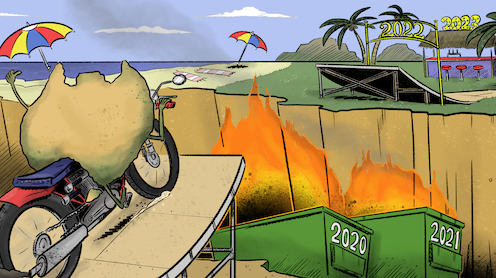 At the risk of being political – and politics is important, it will determine how we are governed for the next three years – economic conditions could scarcely be better for a government seeking re-election.

The economic things that matter most to most people are, in my view:

Other things are said to matter, but I am less than convinced; among them are the state of the federal budget (whether it is “back in the black[1]”), tax cuts (once granted they are forgotten – Julia Gillard gave back more than the carbon tax and wasn’t thanked for it[2]) and esoteric concepts such as government debt.

Total hours worked fell during the lockdown months. But in those states without long lockdowns (those other than NSW, Victoria and the ACT) hours worked kept climbing to still-higher all-time highs. It’s an indication of what’s likely in NSW and Victoria now their lockdowns are over, something the Reserve Bank says it can already see happening[6] in NSW.

The proportion of those working who say they’re underemployed (working fewer hours than they want) dived to an eight-year low[7] before the mid-year lockdowns.

I haven’t mentioned the unemployment rate (officially 4.6%) because at the moment the rate can’t be taken seriously.

It is that low mainly because to be counted as unemployed you need to be actively looking for work, and many workers stood down during the lockdowns and available to work were not searching[9], and also because of an oddity in the way the Bureau of Statistics counts non-resident workers[10].

Regardless, absent any lockdowns, in practical terms it is set to be easier to keep and find a job than it has been for a long time going into an election.

Last year’s recession brought with it a collapse in wage growth as employers froze or cut wages, something that’s now being unwound[11] as the economy picks up, albeit, as the Reserve Bank notes with apparent disapproval, “weighed down by more muted public sector wages growth”.

The bank’s latest forecasts, released on Friday, have wage growth climbing from 1.7% to almost 3%[12] over the next two years, which will be the fastest growth in a decade.

But it holds out the prospect of an improvement[14] at a time when private sector wages are already improving, which is what matters for the way people feel.

Economic growth – the catch-all measure for what’s happening in the economy – is set to climb out of the lockdown slump and accelerate[15] throughout next year before settling back to the 2-3% that was common before the recession.

It also won’t be good enough, but it will be moving in the right direction, and accelerating strongly next May, at the time we are likely to be asked to vote.

These forecasts matter because similar ones (prepared by the Treasury instead of the Reserve Bank) will underpin the economic statement or budget released before the election and the Pre-election Economic and Fiscal Outlook[16] released by departmental secretaries without political input during the campaign.

They will become the accepted narrative.

After soaring a frightening 21% in the past year to barely affordable highs, there’s every chance home prices will ease off. On Melbourne Cup Tuesday, the Reserve Bank withdrew[17] its support for the near-zero three year bond rate that banks had been using to fund ultra-cheap fixed rate mortgages.

It’s no longer possible to get a three-year fixed rate mortgage for less than 2%.

A few weeks earlier the Australian Prudential Regulation Authority instructed lenders to refuse mortgages to borrowers who couldn’t withstand an increase in mortgage rates of three percentage points[18] (such as an increase from 3% to 6%).

APRA expects the instruction to cut the maximum that can be borrowed by 5%. By election day price rises might have slowed or stopped.

And low rates for some time yet