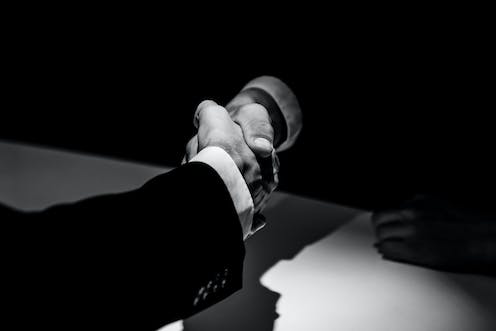 “We look after our mates,” Australia’s new prime minister, Scott Morrison, has declared[1]. He’s said it on several occasions, in fact. So it must be a value he thinks important. Meanwhile the man he defeated for the top job, Peter Dutton, has been embroiled in controversy[2] over allegedly using his powers as immigration minister to do favours for “mates”.

Where do we draw the line between looking after a mate and being corrupt?

The line, like beauty, is often in the eye of the beholder. As recently noted in The Conversation[3], many people regard corruption as being more than illegal acts like taking bribes or misappropriating funds. They also include actions that are technically legal but still morally suspect.

This understanding mirrors the definition from the anti-corruption group Transparency International: the abuse of entrusted power for private gain.

Some research suggests Australians believe corruption is getting worse[4].

Read more: Australians think our politicians are corrupt, but where is the evidence?[5]

Other evidence, however, suggests perceptions of corruption are only slightly more than a decade ago. This data comes from the World Happiness Report[6], published by the United Nations and edited by economist Jeffrey Sachs and colleagues.

This means it paints a wider picture than Transparency International’s annual Corruption Perceptions Index[7], which reports only people’s perception of political corruption.

With survey results now available for the past 12 years, we can see how perceptions differ both over time and between countries. We can also assess what drives those changes. Do they reflect particular events? Or is something more fundamental going on?

For simplicity, let’s just look at the data for Australia, Britain and the United States, given their relatively similar legal and cultural values.

The data show some significant differences in the way perceptions of corruptions have shifted over the past decade.

The most obvious detail is that Americans have significantly higher perceptions of corruption than the other two countries. Those perceptions seem to have been increasing steadily. Some 60% of Americans felt corruption was widespread in 2005; this has now climbed to 70%.

By contrast, perceptions of corruption in Australia and Britain seem to rise and fall, with little difference in 2017 compared with 2005.

What is responsible for these shifts in sentiment? In Britain, perceptions of corruption were greatest between 2008 and 2010. The Global Financial Crisis may have played a part, with disgust at politicians bailing out bankers while ordinary people suffered. The MP expenses scandal of 2009 would also certainly have reinforced the belief politicians were exploiting the system.

Read more: From our ancestors to modern leaders, all do it: the story of corruption[8]

Thankfully, the Global Financial Crisis did not affect Australians that much. This might explain why perceptions of corruption here peaked in 2007. That peak is probably related to two developments; the oil-for-wheat scandal and the Howard government’s introduction of WorkChoices, which was widely seen as being unfair.

The Global Financial Crisis might have contributed to American jaundice about the cosy relationship between politicians and bankers. But the steady increase in the US corruption measure points to more than specific events influencing perceptions. The national mood Donald Trump captured so well with his promise to “drain the swamp” attests to underlying social factors.

One of those factors is a society’s level of inequality.

This second graph shows the combination of inequality and corruption perception in OECD countries. Inequality is measured by the standard Gini coefficient, which runs from 0.0 (everyone has the same income) to 1.0 (one person has all of a country’s income). The line running through the dots is a trend line. It shows that, on average, perceptions of corruption rise as inequality increases.

This is perhaps not surprising. In their ground-breaking book “The Spirit Level”, Richard Wilkinson and Kate Pickett showed that in less equal societies people have less trust in others. The belief it’s a “dog-eat-dog” world, or that “everyone’s out for themselves”, is more prevalent.

The relationship goes both ways. It is also likely societies with more corruption will become less equal.

Directly tackling corruption is therefore important. As well as restoring faith in public governance, it builds trust more generally, and has economic benefit.

But robust anti-corruption institutions, rules and processes should not be our only tools. Measures to address inequality can also help.