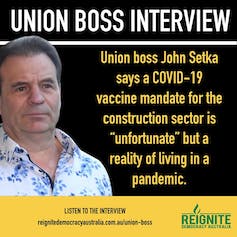 After violence on Monday outside the Melbourne offices of the Construction, Forestry, Maritime, Mining and Energy union, the Victorian government ordered a snap two-week shutdown of the construction industry. Yesterday these protests continued, with up to 2,000 demonstrators holding up traffic around Melbourne’s CBD and clashing with police.

The shutdown of building sites is a perverse outcome for those protesting primarily over vaccination mandates but who also oppose lockdowns.

So why were they directing their fury not at the government that imposed the mandate, nor the employers who will enforce the rules, but the union that represents construction workers? Let’s work through it.

What was Monday’s protest about?

The ostensible catalyst was the Victorian government’s announcement on September 16[1] that by Friday (September 23) all construction workers must show their employer:

The government also announced new site rules that include the closure of tearooms and a ban on consuming food or drinks indoors. This led to workers on sites around the city setting up tables and chairs[2] in the street last Friday, causing minor inconvenience to motorists. The CFMMEU was sympathetic to these protests.

So why the protest against the union?

In the days before[3] the vaccination mandate was announced, the CFMMEU’s state secretary, John Setka, said the union did not support mandatory COVID-19 vaccinations.

An example of memes about John Setka being shared on social media. Twitter

But in a radio interview on Thursday[4] he described the mandate as a unfortunate reality of living in a pandemic. “Extreme circumstances sometimes call for extreme measures,” he told 3AW radio host Tom Elliott. “It’s unfortunate, but it is what it is.”

These comments were turned into memes and shared by social media activists on platforms such as Telegram, fomenting anger against Setka as a traitor.

What is the CFMEU’s position on vaccines?

But the union has also opposed mandatory vaccination — particularly vaccine mandates imposed by employers. Its public position has been it will “always advocate for safety, jobs, and freedom of choice”. That includes freedom of choice about whether to be vaccinated. It has threatened action against any employer seeking to make vaccination a job requirement without a government-imposed mandate.

In August, for example, the union’s NSW state secretary Darren Greenfield said[6]: “We call on the government to release the pressure on members that do not want to get the vaccination, never will get the vaccination because that’s their personal choice, and allow them to get back to work.”

However, the union sees a government-imposed vaccine mandate as something it can’t do much about — nor one it wants to expend energy on.

Is this the same or different to other unions?

Each union has its own leadership and there are different positions being adopted. But the construction union’s approach has been broadly the same as the Australian Council of Trade Unions, which has supported vaccination but also consistently opposed individual companies having the power to mandate vaccines.

The ACTU and the Business Council of Australia have issued a joint statement[7] that vaccination “should be free and voluntary” and that “for the overwhelming majority of Australians your work or workplace should not fundamentally alter the voluntary nature of vaccination”.

They have called on governments to “ensure that where mandatory vaccination requirements are necessary (in a small number of high-risk workplaces), they are implemented through the use of nationally consistent Public Health Orders”.

Read more: Why unions support vaccination — but not employer mandates[8]

What do the protesters want the union to do?

The protesters’ agenda appears straightforward. They want the union to oppose the government’s vaccine mandate at all costs, by any means at the union’s disposal.

What exactly the union could do even if it wanted to, though, isn’t all that clear. Industrial action — that is, striking — is not an option.

So who organised this protest?

Read more: 'It's almost like grooming': how anti-vaxxers, conspiracy theorists, and the far-right came together over COVID[11]

There is evidence that notable anti-lockdown activists were in the crowd, as well as at least one far-right organiser[12].

Anti-vaccination and fringe political groups have also previously sought to foment protests and other action by aged-care workers, truck drivers and teachers.