It surpasses the A$32 billion[1] European commercial real estate giant Unibail-Rodamco agreed to pay for Frank Lowy’s Westfield Corporation in 2017.

The deal marks an extraordinarily successful journey for Afterpay, a company founded in 2014 and listed on the Australian Stock Exchange in May 2016 at $1 a share.

At the close of last week, before this deal was announced, its share price was A$96.66, giving it a market capitalisation of about $27.5 billion.

Square, which at the end of last week had a market cap of about US$123 billion, may pay 1% of its buyout offer in cash, but the rest will be in stock, giving Afterpay shareholders 0.375 shares of Square for each Afterpay ordinary share.

The stock swap means the implied price Square is paying for Afterpay share is about A$126.21 — a premium of about 30.6% to its closing price last Friday.

That’s to do with the profitability of the “Buy Now Pay Later” (BNPL) market, in which Afterpay has been a pioneer. The market has become even more profitable due to the COVID-19 pandemic, which has accelerated the use of online and cashless payments as well as leaving more people short of money.

BNPL companies are so-called because they work differently to traditional credit companies. The reason they emerged first in Australia can be attributed both to “the inventiveness of Australia’s retail and finance sectors[2]” as well as a quirk in Australia’s credit regulation laws.

Under Australia’s National Consumer Credit Protection Act[3], credit is defined (in line with the dictionary definition) as a method of paying for goods with the credit provider making their profit through charging interest.

Afterpay does not charge consumers interest. The majority of its revenue instead comes from merchant fees, charging a commission of 4-6% on the value of the transaction plus 30 cents for every purchased. The rest of its revenue comes from charging late fees when customers fail to make repayments on time.

Afterpay’s standard repayment plan is four equal instalments every fortnight over two months. A missed payment incurs an initial $10 penalty. If you still have an outstanding balance after one week a further $7 is charged. 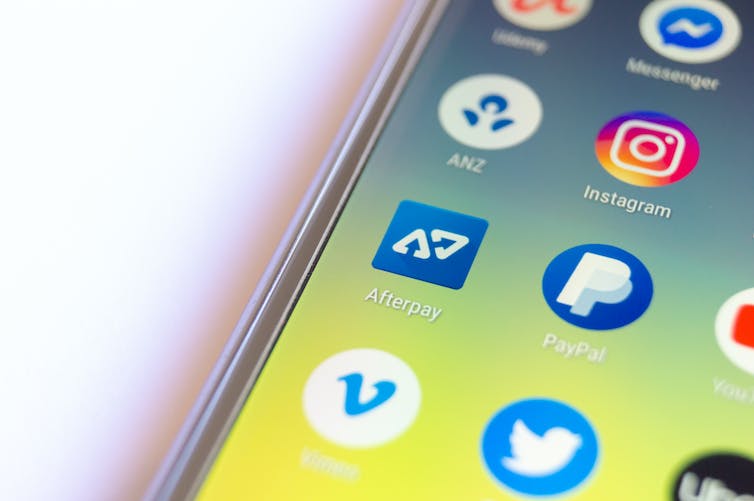 Afterpay has made it very easy to buy now, pay later. It charges merchants a commission on the transaction as well as late fees if customers miss their scheduled payments. Sam Bianchini/Shutterstock

It could be argued these late fees are the equivalent of charging interest — and a hefty interest payment at that. One $10 late fee on a debt of $150 translates to an effective interest charge of 6.67% per fortnight.

But because they don’t explicitly charge interest, Afterpay and other BNPL companies are not covered by credit laws.

This has led to concerns about BNPL providers profiting at the expense of the most financially vulnerable consumers. In 2018 the Australian Securities and Investments Commission[4] called for reform to close the legal loophole. It wanted BNPL providers to operate under the same rules as credit providers — including the same responsible lending obligations to perform a credit check and verify that customers could afford to take on the debt.

However, this has not happened. A Senate inquiry decided last year[5] no regulation was necessary, instead endorsing self-regulation. Afterpay and its rivals signed a voluntary code of conduct[6] earlier this year.

Read more: What's the difference between credit and debt? How Afterpay and other 'BNPL' providers skirt consumer laws[7]

Despite these concerns, the ease of Afterpay’s technology has made it a very convenient way to buy things. Its logo is becoming ubiquitous. Over the year to June 30 the number of merchants offering it as a payment option increased by 77% to 98,200, and number of customers by 63% to 16 million.

With the BNPL market proving to be so lucrative, credit card companies, banks and tech companies have been looking to muscle in. Visa announced its BNPL plans in July 2019[8], and it is just now rolling out its technology[9] to merchants. Commonwealth Bank of Australia is also in the process of establishing its “StepPay[10]” offering. Paypal launched its “Pay in 4[11]” service last month. Apple last month also announced its own plans[12].

Read more: How to know if your online shopping habit is a problem — and what to do if it is[13]

Square, co-founded by Dorsey and Jim McKelvey in 2009, has gone the simpler route by buying the pioneer in the market.

Afterpay’s board has unanimously recommended shareholders accept the offer. Both Afterpay and Square shareholders still need to approve the deal. So too does Treasurer Josh Frydenberg, under Australia’s foreign investment laws.

But this is all likely to be a formality. It’s an offer too good to refuse.