“Wherever I look I see not just bad conduct but illegal conduct, improper conduct, unacceptable conduct and it permeates the whole organisation,” Ray Finkelstein, the royal commissioner into Crown Resorts’ Melbourne casino said this week.

That was when Xavier Walsh, Crown Melbourne’s chief executive, was in the stand. Then came his boss, Crown Resorts’ chief executive Steve McCann, who started his role only on June 1. He reportedly almost burst into tears[1] during questioning.

But a far more revealing performance was to come — from Crown Resorts’ executive chair, Helen Coonan, the former federal minister who has been on Crown’s board[2] since 2012.

A litany of bad behaviour

Revelation after revelation has flowed from Victoria’s royal commission into the casino.

Before this week, evidence from Crown staff and submissions by counsel assisting had revealed shocking inadequacies[3] in “responsible service of gambling” (RSG) practices. This included the case of a woman who gambled for four days without leaving the casino, napping at the poker machines[4].

Crown Resorts reduced its tax bill by hundreds of millions of dollars[5] by claiming the cost of freebies to gamblers in its poker machine loyalty scheme.

It breached the Casino Control Act by allowing credit and debit cards to be used to buy casino chips.

On top of this, ABC’s Four Corners[6] program this week reported that five former inspectors with Victoria’s gambling regulator, the Victorian Commission for Gambling & Liquor Regulation, believed their attempts to investigate criminal activities and money laundering at Crown had been thwarted by the regulator.

All of this, and more, comes after the NSW casino inquiry[7] headed by Patricia Bergin revealed extensive money laundering and criminal infiltration of Crown’s existing operations. This evidence was sufficient for the NSW regulator to find Crown not suitable to operate its new Barangaroo casino.

Read more: How Sydney's Barangaroo tower paved the way for a culture of closed-door deals[8]

On Tuesday McCann said he wasn’t informed of the tax avoidance issue until he had been in the job for a week. He is yet to complete probity checks, but assured Finkelstein he had a track record of “turning things around”.

He has his work cut out, based on Coonan’s evidence yesterday[9].

Coonan told the commission that until February, when the NSW casino inquiry published its report, changing Crown’s culture was very difficult. Even though she was the board’s chair, she reported being blocked in her attempts to override the combative approach Crown took to inquiries into its operations.

In answer to questions from counsel assisting, Adrian Finanzio SC, Coonan said the board lacked independence, and pushing back against the company’s “defensive” strategy would have involved leaving it.

It was the “wrong course”, she said, but the legal advice was that changing strategy was not advisable. 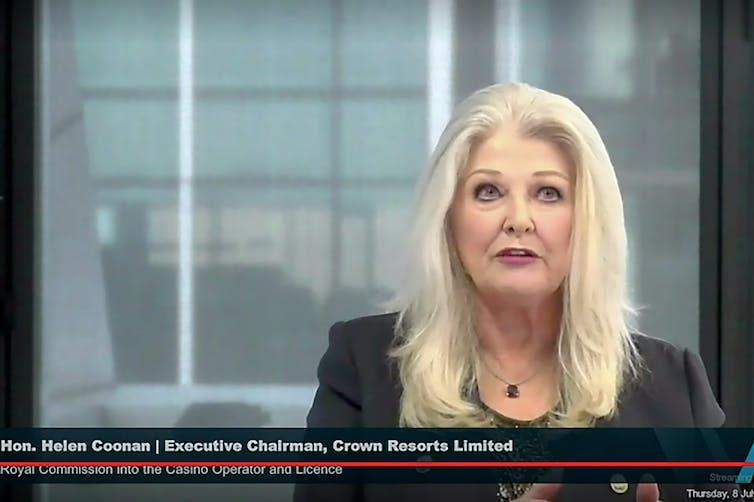 Management also, apparently, failed to disclose all necessary information to the board, which became clear only after May 2019, when the Victorian gaming regulator provided the board its draft report into the arrests of 19 Crown staff in China in 2016 for allegedly illegally promoting Crown’s casinos. Yet even after media reports in mid-2019, the board did not pursue any independent investigations into the issues raised.

Between late December 2020 and the start of the royal commission in mid-May, Coonan said she met with officials from the Victorian gaming regulator five times to improve their relationship. At the first meeting, Coonan said she conveyed her “absolute commitment” to a more cooperative approach.

But that commitment, she explained to the commission yesterday, was “personal”.

When the regulator subsequently prepared a statement of factual information on the China arrests, Crown responded in January 2021 with a combative 31-page rebuttal signed by Coonan.

That response, she told the commission, was symptomatic of the “old Crown”.

It wasn’t easy to turn around a board or a senior management team, she explained. The royal commission provided a great opportunity to get to the bottom of things.

Commissioner Finkelstein asked whether it might not have been better for directors to acquit their duties and scrutinise, explore and be curious – in other words, to do the job they were meant to perform.

Coonan agreed that might be the case in “textbook terms”. But in practice the “old regime” prevented this, via legal advice, a lack of transparency, and the stance of the company’s management.

Until last month Crown argued its approach was “world leading”. This ceased after Crown Melbourne’s general manager for responsible gambling, Sonja Bauer, admitted to the commission this was not so[11].

Read more: Responsible gambling – a bright shining lie Crown Resorts and others can no longer hide behind[12]

After extraordinary revelations from the royal commission about the company’s lack of care — including examples such as a patron being allowed to gamble for 34 hours straight without a break[13] — Crown announced changes to its policies[14].

Yesterday Coonan said that, having not been on the company’s responsible gambling committee until recently, she had not previously pursued information about these issues.

To this point Coonan’s evidence was the “Old Crown” was gone. The “New Crown” would acquit its responsibilities properly. She said she wanted to vacate her seat by the company’s annual general meeting in October, having put that “New Crown” into effect.

Yet less than two weeks ago, on July 2[15], Crown’s law firm, acting for the directors of Crown Resorts, wrote to the Victorian Government seeking a meeting. The letter stressed it was “not in the public interest for Crown to fail”.

Commissioner Finkelstein suggested yesterday the intention behind the letter was “to avoid a particular finding that the commission might make”. Coonan denied this, saying she was only “trying to look after the broader interests of the company”.