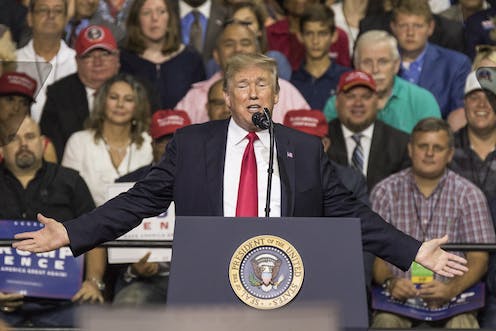 The Trump administration’s economic policy[1] is rapidly breaking down the World Trade Organisation (WTO) system and shattering the rules-based international order[2]. On top of imposing tariffs[3], the United States is blocking[4] the appointment of new judges to the body that interprets and enforces WTO rules, decisions and agreements.

If this continues, the WTO will virtually cease to function by the end of 2019.

This will cause a gradual breakdown of the multilateral trading system and lead to a new international economic order that is no longer anchored in liberal democratic values, nor fully constrained by the rule of law.

Australia must plan for a change in the globalised economy that has underpinned our 27 years without a recession[6].

In other words, Australia urgently needs a plan B should Donald Trump’s trade agenda[7] lead to further protectionism.

This could include a so-called “border adjustment tax[8]” – a flat tax on imports with a corresponding rebate on exports – or more emphasis on trade with noncompetitive economies such as India and Indonesia.

The US blocking of new judges to the WTO’s Appellate Body[9] has caused a large backlog of disputes.

The Appellate Body is an international trade court of appeal typically composed of seven judges. They have the final say on the interpretation and enforcement of WTO rules, decisions and agreements.

The WTO is a member-driven, consensus-based organisation[10]. Thus, the appointment of new Appellate Body judges can only occur[11] “if no Member, present at the meeting when the decision is taken, formally objects”.

This is not exactly an equal veto power for all WTO members from mighty China to tiny Vanuatu. The larger economies can easily sway the minnows. The reverse is not true.

In practice, it takes the opposition of only one very powerful country to block any WTO process.

Read more: Why Trump's tariffs will have little impact on Australia and a trade war is unlikely[12]

From October 2018 there will be only three Appellate Body judges left, the minimum required to form a valid dispute settlement panel. Crucially, two more judges will conclude their quadrennial term in office on December 10 2019, thus reducing the Appellate Body to only one member.

This effectively means the WTO rules can no longer be implemented and enforced. A paralysed Appellate Body is the death knell for the multilateral trading system.

This is what Trump really meant when he said that “trade wars are good and easy to win[13]”. They are indeed for countries allowed to act unilaterally without the constraints of enforceable multilateral rules.

Diminishing the Appellate Body is just the latest in the smash-and-grab tactics used by the Trump administration[14] to counter globalisation.

The WTO Appellate Body crisis[16] is a canary in the coalmine. Australia must act without delay to limit any damage from disrupted trade flows and to chase opportunistic gains from trade diversions[17] in emerging regional value chains.

For example, Australian beef producers will be much more competitive in exporting to China[18] as their American competitors have to grapple with a 25% tariff on their beef.

On the other side, Japan recently struck a deal with the European Union[19] to drop tariffs on food imports in exchange for concessions on car exports hit by the US-China trade war. Australian food exporters will face stiffer competition from the EU in the Japanese market.

Life after the WTO

Australia should refocus diplomatic efforts[22] towards bilateral ties within the Indo-Pacific region rather than the developed economies that are further away.

A new generation of bilateral trade and investment partnerships is better suited[23] than dwindling WTO instruments to maximise Australia’s economic and security outcomes in a less-than-liberal international order[24].

Strengthening Australia’s bilateral ties in the Indo-Pacific is especially necessary in a securitised trade environment[26] that is pivoting to shorter yet knottier supply chains[27] within regional clusters.

We can already spot the initial signs that Australian policymakers are repositioning to navigate life after the WTO. During recent discussions in Buenos Aires between Group of 20 finance ministers, Treasurer Scott Morrison called for a revamp of the WTO system[28], as it “failed to deal with long-standing issues” and was “built for a different time”.

Morrison didn’t spell out what changes he thought were needed to ensure Australia is better off in the next trading system. This is a debate we need to have sooner rather than later.