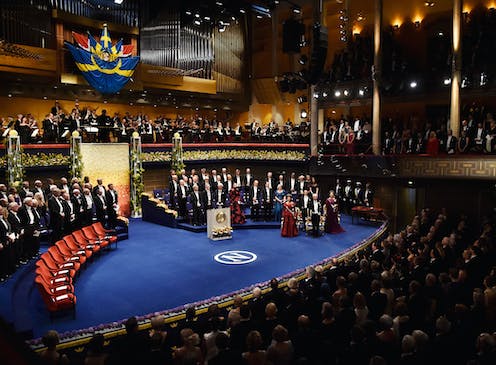 Who will win Nobel Prizes in 2022? Wikipedia posits a handful of contenders for Physiology or Medicine[1], about 20 different possible winners for the Peace Prize[2] and several dozen potential winners of the Literature Prize[3]. But since the Swedish Academy never announces nominees in advance, there are few insights indicating who will win, or even if the eventual winner is on a given list.

Are there ways to predict the future winners?

The Delphi approach[4], named after the oracle in ancient Greece, gathers multiple rounds of opinions from a group of experts to generate a prediction[5]. Gambling firms provide betting odds on the likelihood that specific competitors will win. Crowdsourced competitions[6], such as the Yahoo Soccer World Cup “Pick-Em,” have participants predict individual contest winners and then aggregate the results.

Another approach is a prediction market that provides insight into what people expect will happen in the future by creating a stock market-like environment to capture the “wisdom of the crowd[7].” Groups and crowds often are collectively smarter[8] than individuals when many independent opinions are combined.

As an accounting and information systems professor at the University of Southern California, I investigate issues related to the crowd[9] both in my research and in my teaching. Here’s how prediction markets harness what the crowd thinks to forecast the future.

The wisdom of the market

In prediction markets, participants buy and sell stocks. Each stock’s price is tied to a different event happening in the future. Information about the future is captured in the stock prices.

For instance, in a prediction market focused on the Nobel Peace Prize, maybe Greta Thunberg is trading at $0.10 while Pope Francis is trading at $0.15, and the stocks for the entire group of candidates add up to sum to $1. The prices reflect the traders’ aggregated beliefs about the probability of their winning – a higher price means a higher perceived likelihood of winning.

Prediction markets may use real money, or they can use play money. Google’s market used what it called “Goobles,” while the Hollywood Stock Exchange uses Hollywood Dollars. The Iowa Electronic Markets and PredictIt, both sponsored by universities, use real money. Researchers have found that there are no differences in the performance of markets[10] using real money versus those using play money.

Although using play money makes it possible for many people to participate, one potential challenge for prediction markets that don’t use real money is gaining and maintaining interested participants[11]. Despite using different devices to keep up engagement, such as leader boards indicating who has accumulated the biggest portfolio, there is literally no money on the table to keep participants interested in the market.

Participants bring their knowledge to the market

Prediction markets and crowdsourcing do not function in a vacuum.

Researchers have found that information about events finds its way into the prediction processes from various sources. For example, when I analyzed the relationship between the betting odds[13] and the Yahoo Pick-Em crowd’s guesses for the 2014 FIFA World Cup, I found that there was no statistical difference between the proportion of correct guesses in each. My conclusion is that either the crowd’s guesses incorporated the betting odds information or the crowd’s guesses added up to the same result by some other means.

The accuracy of prediction markets[18] depends on many factors, including who is in the market, what their biases are and how heterogeneous the participants are. Accuracy can also depend on how many people are in the market – more is generally better – and the extent to which they are informed about the events of interest.

Researchers have found that prediction markets have outperformed polls in presidential elections[19] roughly 75% of the time. But accurate results are not guaranteed. For example, prediction markets did not correctly predict[20] that Donald Trump would win the U.S. presidency in 2016.

Who will be in Stockholm for the ceremony?

In 2011, Harvard University economics faculty had a real-money prediction market site, referred to as “the world’s most accurate prediction market.” The site had been used for predicting the Nobel Prize in Economics, but Harvard advised the site to shut down[21].

I couldn’t find any current public prediction markets active for the 2022 Nobel Prizes.

If you know of one, let me know, I want to play.