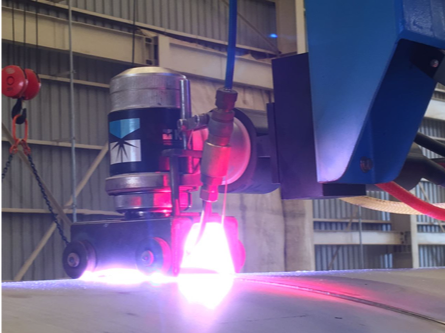 K-TIG Limited (ASX: KTG) (“K-TIG” or the “Company”), a technology company commercialising an industry-disruptive high-speed welding technology, is delighted to announce it has re-listed on the Australian Securities Exchange (“ASX”). This follows the successful acquisition by Serpentine Technologies Limited (which has now been renamed K-TIG Limited).

K-TIG commenced trading today under the ticker “KTG” following the completion of a successful capital raise, raising the maximum subscription amount of $7 million before costs, with strong demand received from institutional investors (including Perennial Value Management and Alium Capital Management), high net worth and retail investors.

Funds from the raise will be used to support the Company’s growth strategy by enhancing its sales and marketing initiatives, supporting research and development projects, purchasing long lead capital items and providing working capital.

K-TIG’s high speed precision technology welds up to 100 times faster than traditional TIG welding, achieving full penetration in a single pass in materials up to 16mm in thickness.

The technology is the result of extensive research into the gas-tungsten arc process, keyhole physics, weld pool stabilisation, heat removal and process efficiency. K-TIG owns all rights, title and interest in and to its proprietary and patented technology.

The technology works across a vast range of applications and is particularly well suited to corrosion resistant materials including stainless steel, duplex, super duplex, titanium and a wide range of reactive metals, exotic materials and super alloys.

K-TIG has been exported to customers in 20 countries, with blue-chip customers including GE, Siemens, Bilfinger, Doncasters and the UK Nuclear Advanced Manufacturing Research Centre.

Having thoroughly proven the technology with exhaustive deployment, commissioning, production experience and expertise over this time, K-TIG now seeks to change the economics of fabrication for its customers through the introduction of its Welding-as-a-Service (WaaS) business model, service delivery via its cloud-linked controller and the generation of long-term recurring revenue streams for the Company from a global customer base across multiple fabrication sectors.

The Company’s growth strategy is to fundamentally change the economics of fabrication for customers through its highly disruptive technology and its transformative Welding-as-a-Service (WaaS) business model.

The Company will continue to focus on extending the capabilities of its technology and target new and existing markets via its Welding-as-a-Service (WaaS) revenue model. The WaaS business model will provide service delivery via its cloud-linked controller and the generation of long-term recurring revenue streams for K-TIG from a global customer base.

The rollout of K-TIG's subscription licencing model is underway and customers are now being engaged. In the initial stages of rolling out its new revenue model, the Company will be engaging with a number of initial customers to refine its licencing model and WaaS cloud-based service delivery business model.

As noted in the Prospectus dated 15 August 2019, Mr Michael Edwards has resigned at completion of the Offers and Acquisition. Mr Kieran Purcell and Mr Syed Shueb have joined the Board. The Board would like to thank Mr Edwards for his contribution.

K-TIG is a transformative, industry disrupting welding technology that seeks to change the economics of fabrication. K-TIG’s high speed precision technology welds up to 100 times faster than traditional TIG welding, achieving full penetration in a single pass in materials up to 16mm in thickness and typically operates at twice the speed of plasma welding. K-TIG works across a wide range of applications and is particularly well suited to corrosion resistant materials such as stainless steel, nickel alloys, titanium alloys and most exotic materials. It easily handles longitudinal and circumferential welds on pipes, spooling, vessels, tanks and other materials in a single pass. Originally developed by the CSIRO, K-TIG owns all rights, title and interest in and to the proprietary and patented technology, which won the Australian Industrial product of the year award in 2014 and the DTC Defence Industry Member Award in 2015.

Statements contained in this release, particularly those regarding possible or assumed future performance, revenue, costs, dividends, production levels or rates, prices or potential growth of K-TIG Limited, are, or may be, forward looking statements. Such statements relate to future events and expectations and, as such, involve known and unknown risks and uncertainties. Actual results and developments may differ materially from those expressed or implied by these forward-looking statements depending on a variety of factors.