While inflation has likely hit its peak, homeowners should brace for further hikes to their mortgage repayments, according to a new Finder poll.


In this month’s Finder RBNZ Official Cash Rate Survey, 15 experts and economists weighed in on future official cash rate (OCR) moves and other issues relating to the state of New Zealand’s economy.


In good news for savers, the majority of panellists (91%, 10/11) expect that the major banks will pass on higher interest rates to savings accounts and term deposits.


Taylor Blackburn, personal finance specialist at Finder, said inflation peaking would be welcome news for many.


“An August adjustment means an incredible 7 rate hikes in the past year.


“With inflation soaring to 7.3%, experts now feel that the RBNZ’s aggressive rate rises have stopped the bleeding.


“Lifting the cash rate is good news for savers, but it’s yet another gut punch for homeowners already doing it tough,” Blackburn said.


Jarrod Kerr of Kiwibank said inflation was a global problem.


“It’s one we must tackle with prudent monetary and fiscal policy. In order to tame the inflation beast, interest rates are being hiked to limit the pass-through," Kerr said.


Kelvin Davidson from CoreLogic said, “The case is clear – inflation is still high and unemployment low. [The RBNZ] need to get on top of inflation expectations."


Experts in favour of investing in shares


A Finder nationally representative survey of 1,504 respondents found more than a third (38%) of Kiwis hold a stake in the stock market.

Blackburn said investing was no longer the complex proposition it used to be.


“New apps and platforms have lowered the bar of entry and we’re seeing more Kiwis get into the share market to build their wealth.


“If you do choose to invest on your own, it’s a good idea to ensure your investment is diversified.


“Take advantage of welcome offers – like free trades and free cash – and make sure you understand the lingo,” Blackburn said.


Brad Olsen of Infometrics said where people have spare cash, “time in the market” is better than “timing the market”.


“As always, a diversified portfolio, and recognising your investment risk tolerance (and when/for what you might need your money) are all critical factors," Olsen said.


Alfred Guender of the University Of Canterbury said, “There are always opportunities to pick a few undervalued companies that have been hit hard by the pandemic and will recover in due course.


“Besides, the stock market serves as an inflation hedge,” Guender said.


Brain drain in the labour market


The Ministry of Business, Innovation and Employment figures show that up to 125,000 Kiwis may move overseas in the next year as part of a brain drain.


Dr Oliver Hartwich of The New Zealand Initiative agreed the brain drain was a major risk to the economy.


“There is a chance that despite a possible recession and monetary tightening, the labour market will remain tight. This, in turn, will push up wages and thus create further inflationary pressure.


“The result could be a highly unusual situation in which we will simultaneously experience an economic contraction, inflation and (still) low unemployment. It is a scenario which would make the Reserve Bank's job much harder," Dr Hartwich said. 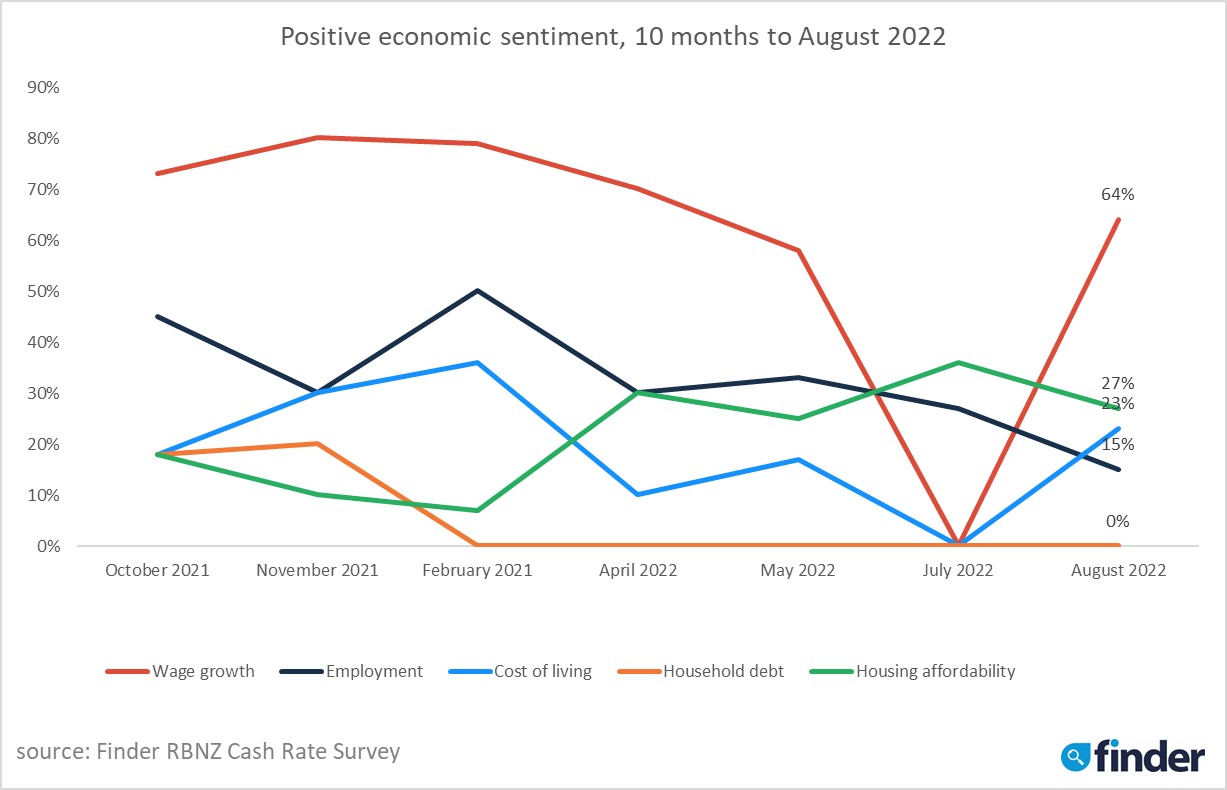 
Positivity towards household debt remains at 0%. 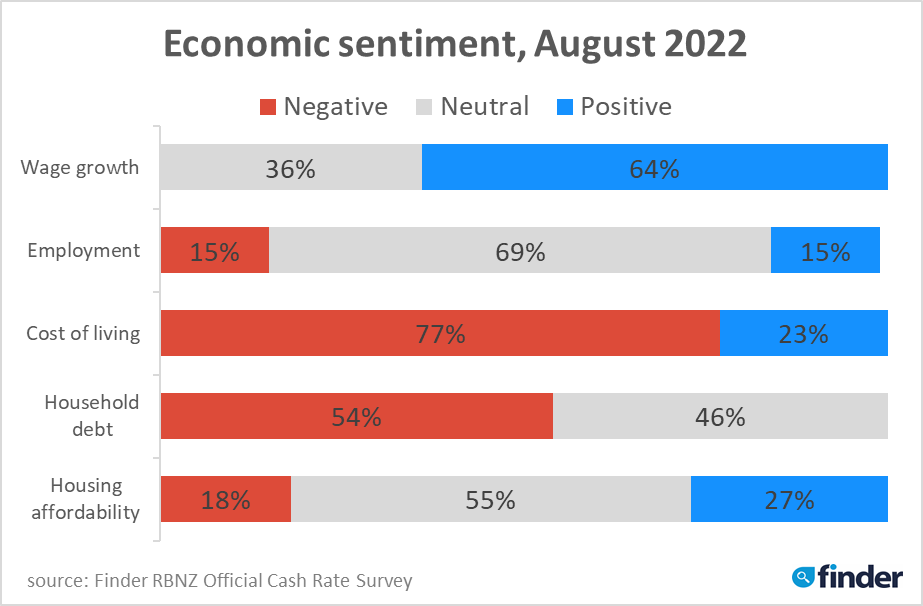 *Experts are not required to answer every question in the survey


Here’s what our experts had to say:


Christina Leung, NZIER (Increase): "Inflation pressures are very strong, and the RBNZ is focused on reining this in."


Ashley Church, ashleychurch.com (Increase): "We haven't yet reached the peak of this round of inflation and Orr is determined to avoid the mistakes of previous Governors."


Brad Olsen, Infometrics (Increase): "Inflation has broadened in scope, with price rises spilling over into more parts of the economy. Higher wage growth is also fueling concerns of a wage-price spiral. There's a need to control near-term inflation expectations, which means more raises are needed in the near-term. A 75bp increase should be considered in August 2022. But with confidence in the doldrums, economic pressures could well ease in late 2022 and into 2023, that would allow for more accommodative policy. The Bank must remain steadfast in getting inflation under control, and will only feel comfortable easing up on rates when inflation is subdued."


Michael Gordon, Westpac (Increase): "Interest rates will need to remain 'high' for some time in order to bring inflation pressures to heel."


Debbie Roberts, Property Apprentice (Increase): "I believe that the RBNZ will continue it's "hard and fast" approach towards tackling inflation until evidence shows that it is working."


Dr Oliver Hartwich, The New Zealand Initiative (Increase): "Inflation pressures remain significant. There is a danger of expectations of further inflation solidifying. The RBNZ will want to counter this and continue its tightening."


Jarrod Kerr, Kiwibank (Increase): "Inflation is a global problem, and one we must tackle with prudent monetary and fiscal policy. In order to tame the inflation beast, interest rates are being hiked to limit the pass-through."


Michael Reddell, Croaking Cassandra economic commentary blog (Increase): "While forward activity indicators are slowing and core inflation appears to be levelling off, the RB will not yet be comfortable they have done enough. However, there may be a reasonable case for not moving in October and waiting until they have the next CPI and lab mkt data."


Kelvin Davidson, CoreLogic (Increase): "The case is clear - inflation is still high and unemployment low. They need to get on top of inflation expectations."


Alfred Guender, University Of Canterbury (Increase): “There is no reason why RBNZ would stop hiking rates now. The OCR is expected to be at around 3.5 % by the end of the year.”