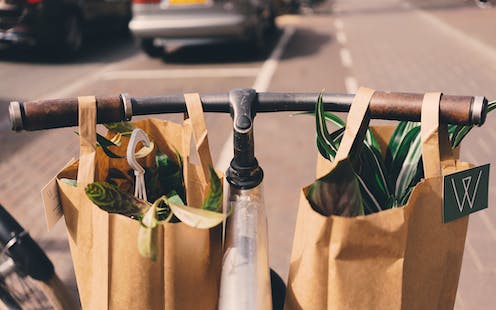 Australian supermarkets phasing out single-use plastic bags is just one example of how retailers are fiercely engaged in a race to be “green”. Other examples are dumping plastic straws, buying back used products and reducing unnecessary packaging.

Rather than competing on price or time, green credentials offer a way for retailers to differentiate themselves. Encouraging customers to make overtly good moves also has a psychological effect, allowing them to excuse poor behaviour elsewhere – such as buying a product that may not be ethically sourced.

Having a strong green record also helps create a buffer for when events like plastic bags killing whales[1] or sweatshop abuse[2] hit the headlines.

Read more: Aussie retailers need to adapt to a world built on speed[3]

Way back in April Woolworths announced[4] the removal of all single-use bags across the country by the end of June. Although, after some backlash, Woolworths has said[5] it will give bags to customers until the 8th of July.

Woolworths has since announced further strategies[7] for “a greener future”. These include reducing unnecessary packaging and linking with “food waste diversion partners”.

However, sustainability is bigger than just food waste and plastics.

Ikea Australia recently announced it will “buy back[8]” used furniture to resell. IKEA has been doing this in other markets[9], like Hong Kong, for some time.

While consumers are increasingly engaging in shopping activities that support the environment, such as reusing shopping bags, buying local and supporting local farmers and producers, at the same time many are still tempted by A$4 T-shirts from Kmart.

This behaviour can perhaps be explained by the effect of “moral self-licensing[11]”. This is where consumers do something good to offset their bad behaviour.

Read more: We are what we eat: the demise of the ethical grocery shopper[12]

In the context of shopping, a good deed, a customer putting reusable bags in the boot of the car, will be followed by a not-so-good deed, such as driving to the shops in our gas-guzzling 4WD.

In this way, the first choice gives us a positive self-concept, which negates or “licenses” the subsequent more self-indulgent choice[13].

The only concern for companies is that they might be accused of “greenwashing[14]” – using marketing to create the perception[15] that their policies, purpose or products are environmentally friendly, when that’s not really the case.

Despite consumer awareness of the practice of greenwashing, the number of companies making green claims has escalated sharply in recent years as organisations strive to meet escalating consumer demand for greener products and services.

According to one advertising consultancy[16], there were 2,219 products making green claims in 2009 alone, a 79% increase[17] over two years earlier.

Read more: Getting rid of plastic bags: a windfall for supermarkets but it won't do much for the environment[18]

Research shows[19] that when consumers are sceptical about a retailer’s corporate social responsibility practices, this can damage the retailer’s brand, increase sensitivity to negative information and stimulate unfavourable word of mouth.

Over the past couple of years, we have seen exactly these phenomena play out again and again.

Several years ago, Walmart faced scrutiny[20] about its corporate social responsibility claims relating to renewable energy, the industrialisation of food systems and its cheaply made, disposable products[21].

Starbuck’s green credentials were met with scepticism[22] when it was reported some stores left taps running all day to clear pipes[23].

Other retailers like Bed Bath & Beyond, Nordstrom, JC Penney and Backcountry.com have faced fines for making misleading environmental claims[24].

Banning the single-use plastic bag alone will not save the environment. Sadly, it is not as simple as that. Research shows[26] lightweight plastic shopping bags make up around 1.6% of litter in Australia or less than 2% of landfill.

However, despite some backlash[27], banning the bag is certainly a step in the right direct.

Remembering to bring reusable shopping bags is a fairly significant change in shopping behaviour, but the practice has been successfully implemented in states such as Tasmania, which banned single use bags several years ago[28].