The call by New Zealand business leaders for an inquiry into the need for a modern-day slavery law[1] is welcome but long overdue.

As a recent investigation of New Zealand business and political links[2] to the oppression and exploitation[3] of China’s Muslim Uighur population showed, the issue is increasingly urgent.

At the centre of the problem modern slavery law seeks to address is the globalisation of business supply chains. Exploitation by forced labour or slavery can happen at any stage, from mining, fishing and harvesting to manufacturing and packaging.

Proper audits of supply chains would help ensure businesses are not complicit (wittingly or unwittingly) in that exploitation.

Given New Zealand prides itself on being an early proponent of human rights such as women’s suffrage and social security, this should be taken seriously. As the business leaders’ letter put it, “Modern slavery goes against our Kiwi values.”

NZ has fallen behind

International prohibition of forced labour goes back to an International Labour Organisation treaty from 1930, the Forced Labour Convention, which New Zealand agreed to in 1938.

Moreover, all multinational companies operating in New Zealand should be taking steps to support human rights generally and ensuring they guard against forced labour.

This is required under OECD guidelines[4] going back two decades, which New Zealand has agreed to implement.

On modern slavery, however, New Zealand now sits behind the US, the UK and Australia. What’s worse, our parliament rejected previous opportunities to make progress.

Read more: Global supply chains link us all to shame of child and forced labour[5]

Section 54 of the old Customs and Excise Act 1996[6] prohibited the import into New Zealand of various items, including those produced “wholly or in part by prison labour”.

In 2009, then-Labour MP Maryan Street introduced a Customs and Excise (Prohibition of Imports Made by Slave Labour) Amendment Bill. This proposed that goods produced by slave labour be added to the act’s statutory list.

The bill also defined slave labour as “labour by persons over whom any or all of the powers attaching to the right of ownership are exercised”. Street noted[7] she was following a lead set in 1930 by the USA.

International human rights treaties prohibit slavery, servitude and forced labour. But forced labour is defined in such a way that work required under a prison sentence can be permissible[8].

So, it seemed reasonable that a country like New Zealand, which already prohibited imports produced by prison labour, should adopt at least as strict a rule for imports linked to slavery or forced labour. 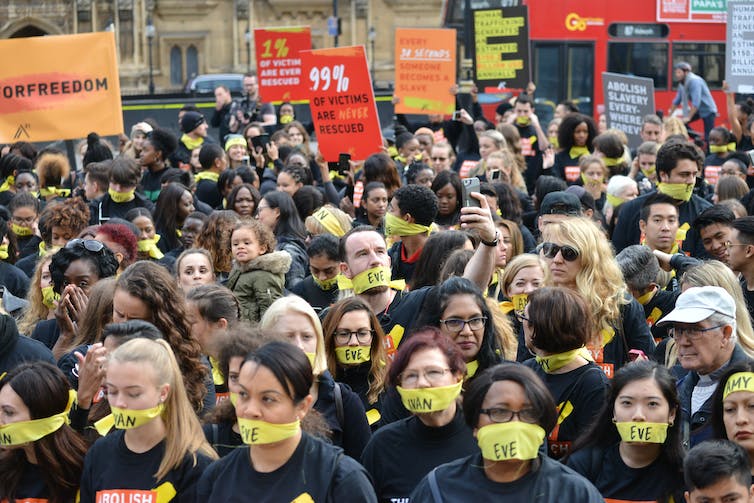 Popular pressure: a 2017 protest in London against modern slavery. GettyImages

A history of political opposition

The National-led government of the day disagreed, arguing it was simply too difficult to establish which imports might have involved slave labour. The complexity of supply chains meant this would be an overly onerous task for businesses.

The combined votes of the National and ACT parties rejected further discussion at select committee level.

In 2016, then-oppostion Labour MP Peeni Henare attempted to reintroduce[9] the bill, but the government position remained the same. The combined votes of National, ACT and United Future prevented further consideration.

No one from the government benches was able to explain why it was any more difficult to define or audit imports produced by slave labour than those produced by prison labour.

Read more: Five ways to work out if a company is serious about tackling modern slavery[10]

Time to catch up

Things have changed. Last year, the Ministry of Business, Innovation and Employment released a draft plan of action[11] against forced labour, people trafficking and slavery.

It contains many proposals, but perhaps the simplest solution lies within the new Customs and Excise Act 2018[12]. Like its 1996 predecessor, this allows legislative orders in council[13] to be issued that identify categories of prohibited imports. These include goods made by prison labour.

Since orders in council are much easier to pass than conventional legislation, it is now a simple task to add the much-needed ban on the import of goods made by slave labour. This should be extended to cover all forms of forced labour.

If and when this happens, many New Zealand companies will have to audit their supply chains. But companies doing business in Australia (if they have annual revenue over AU$100 million) already have to provide a modern slavery statement.

This requires an audit of the risks in their operations and supply chains, and a statement of what has been done to address those risks.

New South Wales is planning[15] a similar requirement for corporations with a turnover of AU$50 million or more. California has equivalent legislation, as does the United Kingdom[16] (with a global turnover threshold of £36 million).

It is a pity the business group speaking up now was not as organised in 2009 and 2016. Had things been different, New Zealand could have built up the auditing skills needed and could even have been exporting that expertise and best practice as an industry in itself.

The political parties that supported change in 2009 and 2016 are now in government. But nothing has changed since those failed attempts to reform the law — other than that New Zealand is falling further behind its competitors.