The Australian government is developing a national freight and supply chain strategy[1]. As part of that effort, we created a set of scenarios describing what Australia’s future might look like 20 years from now. In evaluations by a large number of experts of all the future drivers of change we identified, two emerged as the most powerful and uncertain: widespread use of automation, and increased pressure to become environmentally sustainable. 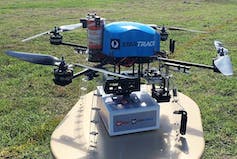 We also explored what Australia should do to remain successful in each of these possible futures. Each scenario was crafted as a rich description of the future, full of elements relevant to supply chains and freight.

To illustrate what the world might look like in each of these futures, several “news articles” accompany the scenarios. They tell us of a fleet of robots that deliver parcels by air and ground directly to Australian homes. They describe a container of Australian wines travelling from Victoria to Shanghai without human intervention, using autonomous ships[2] and vehicles[3].

In one scenario, China has become the sole dominant power in its half of the planet. In another, the world economy has fragmented into blocks, with barely any trade between them. Cyber-attacks, terrorism and slander are used as weapons to disrupt supply chains in one scenario. In another, a whole new generation of consumers, the Alphas, demands high levels of service and fast delivery in everything they buy. 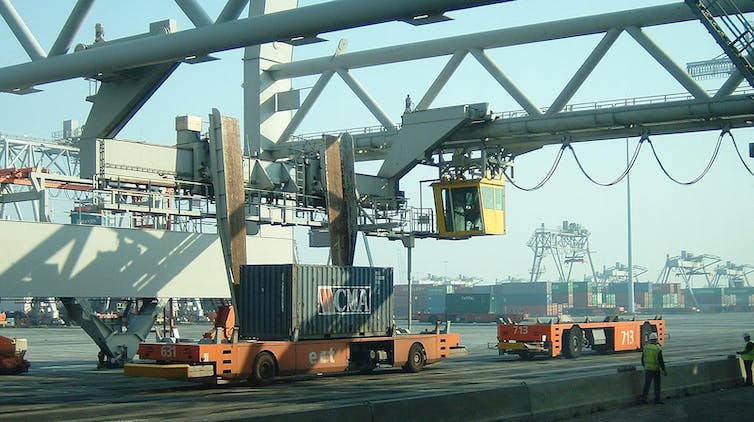 Container terminals have long used autonomous vehicles and machinery, and autonomous ships are on the way. Quistnix/Wikimedia, CC BY[5][6]

How did we create these scenarios?

We started by asking 52 experts in freight and supply chains about things they expect will be different two decades from now. These interviews revealed more than 200 future drivers of change. We validated these in a survey with an even larger group of experts.

We then used 32 families of these drivers as the building blocks to create four scenarios[7]: 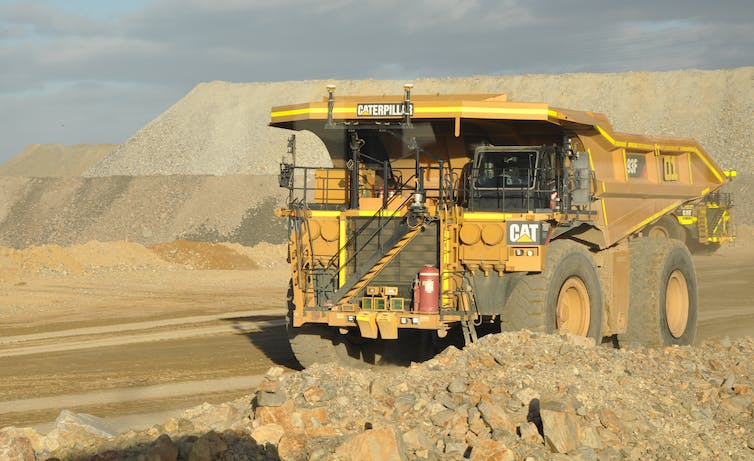 We made sure that each scenario was plausible and internally consistent. The scenarios were designed to be very different from the present and from each other, and to complement each other as a group.

While these scenarios are fun to read and thoroughly grounded in data, they are not predictions. Their purpose is not to forecast what the world will look like in 20 years.

Instead, the scenarios present us with several versions of what the world might look like. Their purpose is to help us prepare for what the future could bring. I like to think of scenario planning as a vaccine against future surprises.

Read more: To service global trade, today's ships and cargo are smarter than ever[12]

The four scenarios served as the stage for a series of workshops conducted across Australia with a total of 90 experts. In these workshops, the experts discussed the challenges and opportunities each scenario presents for Australia’s freight and supply chains. They proposed ways for Australia to be successful in each scenario, and compared notes on suggestions that worked well across multiple scenarios.

We collected more than 15,000 words’ worth of handwritten expert recommendations in our four workshops. We transcribed and analysed all of them, and prepared a complete summary of the most frequent and robust ideas. These are included in our project’s final report[13].

So what do the experts recommend?

In the experts’ recommendations, it is easy to identify three major themes that are common to all four scenarios.

The first is the ever-growing importance of data. For Australia to be successful in any of the futures we envisioned, large amounts of relevant, timely and reliable data must be gathered and shared. This will require open and common data standards to be developed. The need to protect confidentiality will have to be balanced with the need to share data.

The second major theme is the need to educate for the future. Training in robotics, automation, artificial intelligence (AI) and data analysis should be widely available. A focus on science, technology, engineering and maths (STEM) should start in Year 1. Workers who are displaced by new technologies should be retrained, so they can re-enter the workforce.

Read more: Coming soon to a highway near you: truck platooning[14]

The third major theme is the need to rethink regulation. For Australia to be successful in any of the futures we explored, it is necessary to simplify, standardise and harmonise regulations across levels of government and geographies. Regulations, and the process to create them, must become more flexible and agile, so as to promote innovation.

There are other robust recommendations that, according to the experts, are necessary in all four scenarios.

One is to make exports a strategic priority of national importance. Making exports faster and easier was recommended.

Another is the need for cities to include logistics in their plans from the start, not as an afterthought.

The many insights obtained in our project are informing the freight and supply chain strategy that the Australian government is creating. These will help those making long-term decisions to avoid future surprises that might not have been anticipated without a systematic examination of the many possible futures before us.