Australia Day used to be an obvious and uncontroversial occasion for brands to endear themselves to Australian consumers. No longer.

There has been a decided shift over the past decade in commercial attitudes to January 26, acknowledging the problematic nature of the date’s choice as our day of national celebration to our First Nations.

Nothing demonstrates this more conclusively than Cricket Australia dropping references to Australia Day in its promotions of Big Bash League fixtures.

It’s a significant step. The BBL doesn’t need to appease inner-urban lefties. Its customer base is as middle-Australia as you can get. Nor can this be dismissed as corporate timidity, running for cover lest woke activists on social media make a fuss. Indeed the decision has likely excited more controversy than would have business as usual.

“Well, it’s not cricket,” declared Prime Minister Scott Morrison when asked about the move[1]. “I think Australian cricket fans would like to see Cricket Australia focus a lot more cricket and a lot less on politics.”

News Corp’s outrage machine has been running even hotter. “The greatest betrayal of this country by a sporting body,” fumed Sky News host Chris Smith[2].

Both Morrison and News Corp know something about appealing to core audiences. In this case, Cricket Australia’s attunement to its stakeholders is probably a better barometer of national feeling.

Brands have never been shy about using national holidays for commercial gain.

Take Anzac Day – a date (on April 25) far less controversial than Australia Day, but one still fraught with sensitivities.

The Australian Football League has leveraged the “Anzac spirit” since 1995 through its Anzac Day match betweeen Collingwood and Essendon. Though not without its critics, the league has mostly managed to avoiding running afoul of community sentiments in balancing commodification with commemoration. 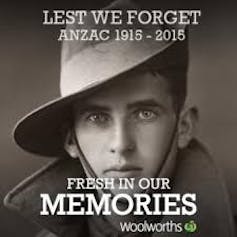 Fresh in our memories.

Other brands have not been so artful. Woolworths, for example. In 2015 the “Fresh Food People” ran an Anzac Day campaign involving an image generator[3] by which people could upload a photo of a relative who served in World War I “or a more recent war” to create a social media profile picture – overlaid with the phrase “Fresh in our Memories” and a Woolworths logo.

Woolworths executives were shocked to discover many people thought this distasteful[4], and quickly dropped the promotion[5].

But it generally takes a lot for brands to back away from commercialisation opportunities. Carlton & United Breweries also copped criticism in 2015 over its Victoria Bitter beer brand’s “Raise a Glass” campaign (running since 2009) but was unapologetic.

It defended its association[6] with Anzac Day – citing a photo of Australian soldiers serving in Egypt during World War II who made a “VB” made out of Victoria Bitter beer bottles, and the money it contributed[7] to the Returned & Services League and Legacy. 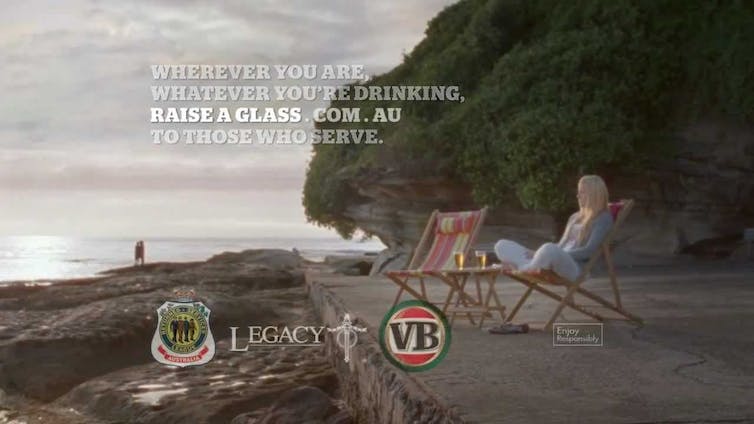 It did, however, drop the campaign in 2016[9]. And now, of course, CUB is owned by Japanese conglomerate Asahi, which makes such promotions somewhat awkward.

Read more: Should we be consuming more than just patriotism on national days?[10]

Cashing in on Australia Day

This may explain why VB has clung to its Australia Day promotions.

It used January 25 in 2018 to launch “Knock Off Times[11]” campaign. Last year it marketed VB-branded thongs[12] – the “ultimate fashion accessory for the Australia Day long weekend”. 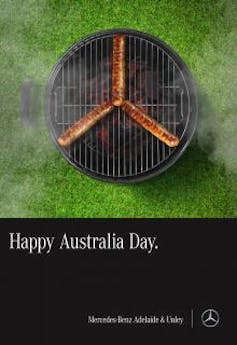 The reason is simple: it’s a sales opportunity.

The national public holiday is a day to have a party with family and friends. Barbecues are popular. It’s a useful date for alcohol brands and others to time promotional campaigns that position themselves as dinky-di.

Coopers, now the largest Australian-owned brewery, has also used the day to promote its true-blue credentials. In 2017 it ran a national billboard campaign [15] with the slogan: “Australia Day. Australian-owned. Perfect.”

Even brands with tenuous connections to barbecues (or Australia) have gotten in on the act. A Mercedes-Benz promotion in 2018 featured sausages on a grill in the style of the German luxury car brand’s three-pointed badge[16]

But for brands attuned to middle Australia, waving the flag around Australia Day is losing its explicit appeal as community attitudes change.

Let’s not forget the date has never been universally embraced. Marking the date of arrival of the First Fleet at Port Jackson in 1788, January 26 was only nationally adopted as Australia Day in the mid-1930s. Given the date’s association with colonisation and dispossession, Indigenous Australians have lamented the choice ever since. In 1938 the first Aboriginal Day of Mourning[17] and Protest was held in Sydney. Counter-commemorations of the day as Survival Day and Invasion Day are hardly new. 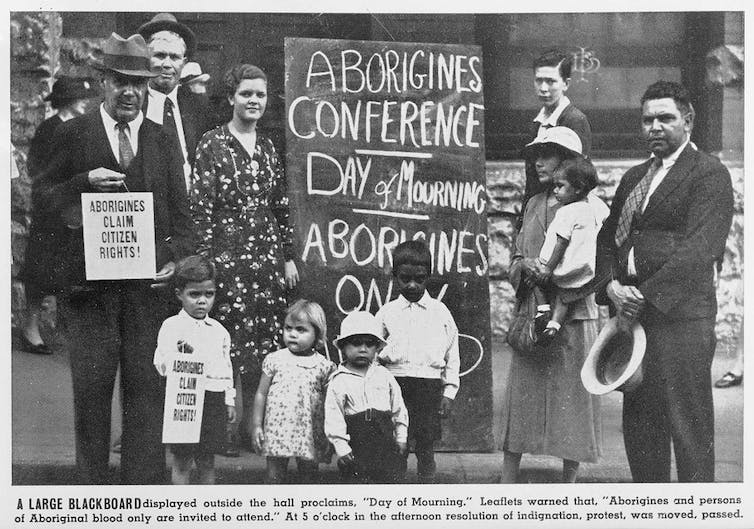 To appreciate how attitudes have shifted, think about lamb.

No advertiser has leveraged Australia Day more adroitly than Meat and Livestock Australia. It has pegged its advertising campaign promoting lamb as the “national meat” to the holiday for two decades, with former AFL player and “lambassador” Sam Kekovich fronting the campaign from 2005 to 2014.

The longevity of the campaign’s timing with January 26 indicates the strategy’s success[20].

The campaigns have been consistently irreverent, appealing to the larrikan sense of humour. But in recent years they’ve also become far less “politically incorrect”. Gone are explicit appeals to nationalism and skewering of easy targets such as vegans. Instead their messages are about sharing and togetherness.

This year’s campaign, “Make lamb, not walls”, is a comical take on border closures. Notably it makes no mention of Australia Day.

Last week pollster Essential Research, which has been surveying Australians annually since 2015 about their feelings of Australia Day – and celebrating it on January 26 – published data[21] showing 53% of Australians regard it as just another public holiday (compared with 40% in January 2015).

Opposition to moving Australia Day to another day is still quite significant (35%) but, tellingly, just 17% of those aged 18-35 are opposed, compared with 55% of those 55 or older. Even among Coalition voters, more support a separate day than oppose it (49% to 45%).

The waning attachment of market-sensitive mainstream brands such as MLA to the day may be just as telling, in the same way betting markets are a useful adjunct to polls to accurately measure the popular mood.

Cricket Australia’s detachment may be the most significant of all barometers. It’s hard to think of a brand more acutely aligned with Australian identity.

True, not all the BBL’s franchise teams are on board. The commercial and marketing manager of the two Melbourne teams, Nick Cummins, is batting on with promoting this year’s January 26 fixtures at the MCG as Australia Day matches. It was, he said[23] “a complex issue that needs time and extensive engagement”.

But the writing is on the wall. As Indigenous cricketer Dan Christian put it, there comes a time to “to read the room[24]”.